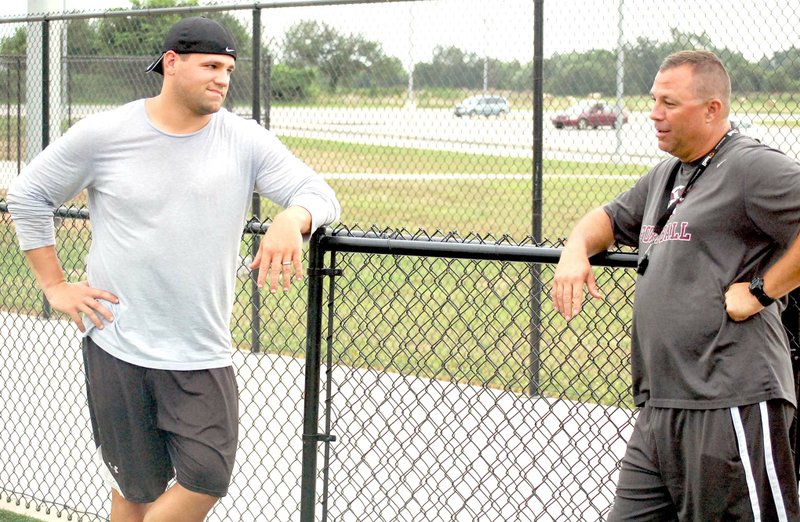 Peyton Hillis has always been driven by other people's doubts.

That drive helped him become a standout football player, first in high school at Conway, then a multiple-threat star at the University of Arkansas and finally in the National Football League, where he played seven seasons with five different teams.

It's that same drive that has led Hillis to Siloam Springs, where he plans to volunteer coach with the Panthers football program this season.

"It seems like Siloam Springs is kind of the underdog story in itself," Hillis said Monday inside Panther Fieldhouse. "Kind of like me. I feel that with what they've got here and who they've had to play in the last couple of years and the level they had to play, people never gave them a shot."

Hillis recently purchased a home near Maysville in northwest Benton County and re-enrolled at the University of Arkansas to finish his degree. He wants to get into coaching and researched several area schools before determining Siloam Springs was the best fit.

He inquired with Panthers football coach Bryan Ross about volunteering, and Ross was happy to welcome Hillis on board.

"You don't get an NFL guy in here everyday in Siloam Springs," Ross said. "I think it will be special to have him around."

Ross said he would like to have Hillis work with running backs, but he also said Hillis will work with all facets of the game.

Hillis was released by the New York Giants in February after playing nine games in the 2014 season. He was placed on season-ending injured reserve after suffering a concussion in November.

Hillis said he had suffered several concussions over the course of his career and decided to hang up his helmet and end his career.

"I feel like this is where the Lord wanted me to be," Hillis said. "I felt like I tried to hold on to my career as long as I did, and I could have kept on playing for two years. It's something you love and if it wasn't for my concussion I'd still be playing right now. If I didn't have my wife (Amanda) and my son (Orry), I'd probably keep on playing."

Hillis certainly had his moment in the sun in the NFL.

He was drafted by the Denver Broncos in 2008 after a solid four-year career at Arkansas, where he rushed for 960 yards and 12 touchdowns, had 1,197 receiving yards and 11 touchdowns and also fielded punts and kickoffs under coach Houston Nutt.

Hillis moved to the top of the depth chart at fullback with Denver before being traded to the Cleveland Browns in 2010.

Following his stellar season with the Browns, Hillis won a nationwide vote to get on the cover of EA Sports' Madden 2012 video game.

In the spring of 2012, Hillis signed with the Kansas City Chiefs and played there one season. He signed with the Tampa Bay Buccaneers in 2013 but was released after one game. He then signed with the New York Giants, where he played in 2013 and 2014.

"But it seems like where I'm best fit is trying to connect with kids, especially on this level," Hillis said. "I think I have a lot to give to them and teach them. I think from where I've been and what I've done they'll listen to me a little bit."

Hillis got his first action with the Panthers at a team camp at Springdale Har-Ber on Monday morning and then helped at 7-on-7 action at Panther Stadium on Monday night.

"It's good being around kids again because it lets you remember how confident and dumb you were," Hillis said. "They're so ecstatic. They don't live for tomorrow. They live for today. They don't worry about paying bills or taking care of anything, they just live to play football.