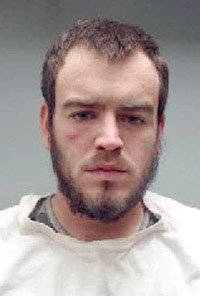 Police have arrested two men in connection with Friday's stabbing in Siloam Springs.

Steven Carlton, 25, of Siloam Springs and Justin Wolf, 30, of Watts, Okla., were arrested Friday in connection with first-degree battery in the stabbing of Derrick Williams, of Colcord, Okla., according to information released Sunday by Maj. Geoff Lewis of the Siloam Springs Police Department.

On Sunday, the press release stated that Williams, 34, was recovering from multiple stab wounds at St. Francis Hospital in Tulsa, Okla. Williams has since been released from the hospital, according to Holland Hayden, communications manager for the city of Siloam Springs.

The three men were involved in an altercation at 1605 Abraham Drive in Siloam Springs early Friday morning, when Williams was stabbed multiple times by Wolf and assaulted by Carlton, police said.

Carlton was being held Tuesday at the Benton County Jail on a $35,000 surety bond.

Wolf was being held Tuesday at the Adair County Jail and pending extradition to Benton County, jail deputies confirmed.

The investigation is still ongoing, Hayden said on Tuesday.