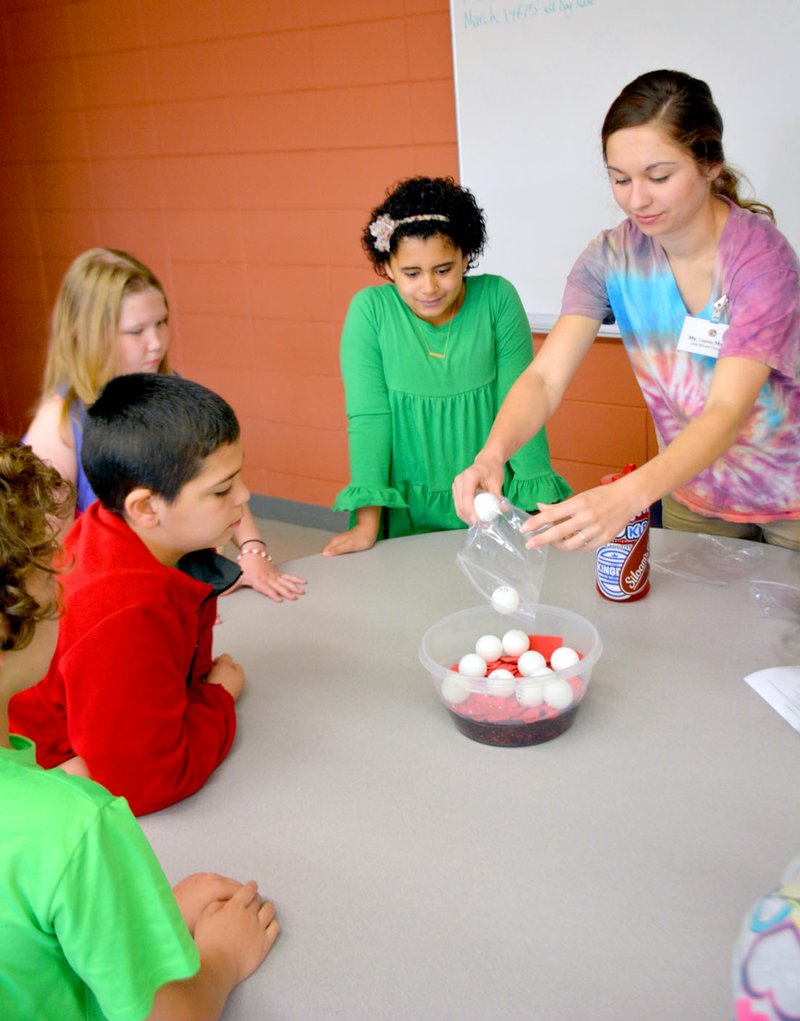 Janelle Jessen/Herald-Leader Lauren Martin, a teaching student at John Brown University, dumped ping pong balls into a bowl of water to represent white blood cells as a group of third- and fourth-grade students from Southside Elementary School looked on. Martin and her partner Brooke Williams were leading a science activity designed to teach students about the different components of blood.

Students from John Brown University's education department and Southside Elementary School have been learning a lot from each other during a Sunrise Science Class.

Early mornings find most Southside Elementary students bustling through the cafeteria as they arrive and line up for class. The scene is very different in a classroom a few feet away. A group of 30 students huddles at tables doing hands-on activities designed to teach them about topics such as blood cells, digestion and x-rays.

On Thursdays, they spend the 25 minutes between the time they get off the bus and when the first bell rings doing hands-on science activities with student teachers from JBU.

A partnership between the university and the elementary school allows college students to experience preparing and teaching science lessons and elementary students to get extra instruction and additional practice with science during the Sunrise Science Class.

Instructional coordinator Becky Defreece called the situation a "win, win for everyone." The elementary students love the special attention and the college students make good role models, she said.

The third- and fourth-grade students were chosen to participate because they arrive early on the bus each day and are generally well behaved, she said.

"They're excited, they look forward to it," she said.

The student teachers accomplish a lot in 25 minutes, Defreece said. New science standard, which will be implemented next year, will require 20 percent of science instruction to be hands-on, she said. Sunrise Science is going to give the future teachers a jump-start on providing that hands-on instruction, she said. It's also giving classroom teachers some ideas to use in the future.

The junior-level university students are doing the project as part of their teaching elementary science class, according to professor Kim Murie. Most of the students will be doing their teaching internship in the fall, she said.

The college students are half-way through a series of 10 Sunrise Science Classes. The university class was divided into two groups -- the first group taught for the first five weeks and the second group just began their series last week.

Each week the future teachers are given a theme and they come up with their own ideas and materials for the activities, Murie said. Last week's theme was body systems and previous themes have included crime scene investigation and space. After each session, the college students meet with Murie to discuss how their lessons went.

Although JBU and Siloam Springs School District have been long-standing partners, this is the first year they have done Sunrise Science, Defreece said. Using the early morning time slot was the idea of Connie Matchell, current chair of JBU's education department and retired curriculum coordinator for the school district.

Many of Murie's students were a little intimidated about teaching science, and the experience has given them a chance to get excited about the subject, she said. It has also given them experience working with small groups and built their confidence, she said.

JBU students Brooke Williams and Lauren Martin taught their group of students about the components of blood on Thursday. They used a bowl of water to represent the plasma and allowed students to add red beans to represent platelets, red foam squares to represent red blood cells and ping pong balls to represent white blood cells.

By the end of the 25-minute session, the students were able to name the four main components of blood and tell their function, Martin said. They also found ways to relate the function to themselves and give examples from their own experience, such as a friend getting a cut that formed a scab and healed.

Martin said that she learned that hands-on activities really help kids connect with the material. She admitted that she didn't enjoy science when she was in elementary school and said she found it encouraging to see the kids getting excited about the subject.

Williams said she enjoyed working with third- and fourth-grade students because they get a wide variety of backgrounds and responses. She echoed Martin, saying that seeing students connecting with the material through hands-on activities is very rewarding.

Cortney DeMaris, another JBU student, taught her group about the skeletal system and bones. She gave each student a doctor's badge and led them on an investigation, encouraging them to address each other as doctor. After learning about bones and how x-rays work, students made a model of the bones in their hands using black paper and cotton swabs.

DeMaris said the experience taught her to be more flexible as a teacher and to pick up the pace when she only had a short time to deliver a lot of information. She also learned that getting student attention right from the beginning is key to keeping them focused through the lesson, she said.

"It was really nice to see they were engaged in learning," DeMaris said.