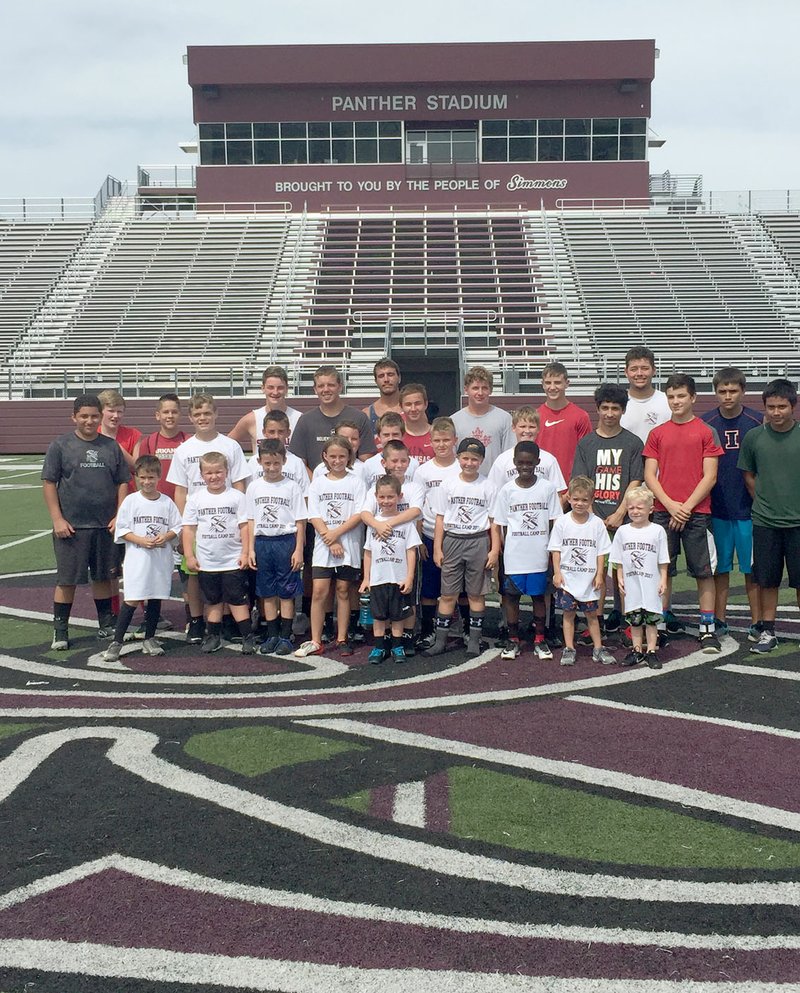 Photo submitted The Siloam Springs football program hosted around 20 campers on Monday through Wednesday of last week for its annual Kids Football Camp.

Summer's not over and school doesn't start for another two weeks, but fall football practice has arrived for the Siloam Springs Panthers.

The Panthers kickoff fall drills at 7 a.m. Monday at Panther Stadium as the team begins preparations for the 2017 season, which begins Sept. 1 when Siloam Springs hosts Rogers.

After a summer filled with morning and evening workouts, team camps and 7-on-7 competition, the Panthers (1-9 in 2016) are eager to get started with practice, according to ninth-year head coach Bryan Ross.

"I think for the most part our guys are ready," Ross said. "They've been here pretty much every day since we got back from the dead period. The new coaches have learned the kids and vice versa. I think we've pretty much got our plan ready."

As they have the last several years, the Panthers will open practice early in the mornings to avoid extreme heat temperatures that are magnified on the artificial turf field of Panther Stadium.

On Monday through Thursday of this week, the team hopes to be ready to hit the field by 7 a.m. On-field practice will end around 10 a.m., followed by weights and film work.

Friday's practice is still to be determined because of teacher meetings, but it's possible the team could go around 6 a.m.

The Panthers will have a full practice on Monday morning, Aug. 7, before practice times will have to be changed to accommodate teacher meetings.

"I think a lot of it is we just know when we can get our work in and when we can't," Ross said. "We try to stay away from the latter part of the afternoon if at all possible."

Heat hasn't been much of an issue the last few years for the Panthers, but the recent dry spell could have an impact.

Per Arkansas Activities Association mandate, the Panthers -- and all high school football teams in Arkansas -- will spend the first two days in shorts and helmets. After that, teams are required to go half shell for three practices before being allowed to don full pads.

"A lot of those first two days are just installation, getting stuff in," Ross said. "Part of it will be refresher from what we did in the spring. A big chunk of it will be conditioning, trying to get people in shape to build on each day. A lot of conditioning is just going out and getting reps. You can't do really what you need to do as far as that until you get the pads on, but that's generally how it is. In the old days you had three days of just helmets and you could go (pads) on the fourth day, but now it's you gotta go two (days) with just helmets and three days with just helmets and shoulder pads."

The Panthers attended their final team camp of the year on July 20 at Rogers Heritage. They hosted three 7-on-7 sessions in July with Gentry, Huntsville, Prairie Grove, West Fork and Greenland.

"I thought the team camp at Heritage went pretty well," Ross said. "The 7-on-7, we try to rotate a lot of people. That's just about getting reps. I don't get hung up on how we do 7-on-7 now, don't even know what the scores were. I just know that we did some things good, and we've still got to get a lot better at some other things. That's all about getting reps and trying to stay in tune to what you're doing. For the most part I've been pretty pleased."