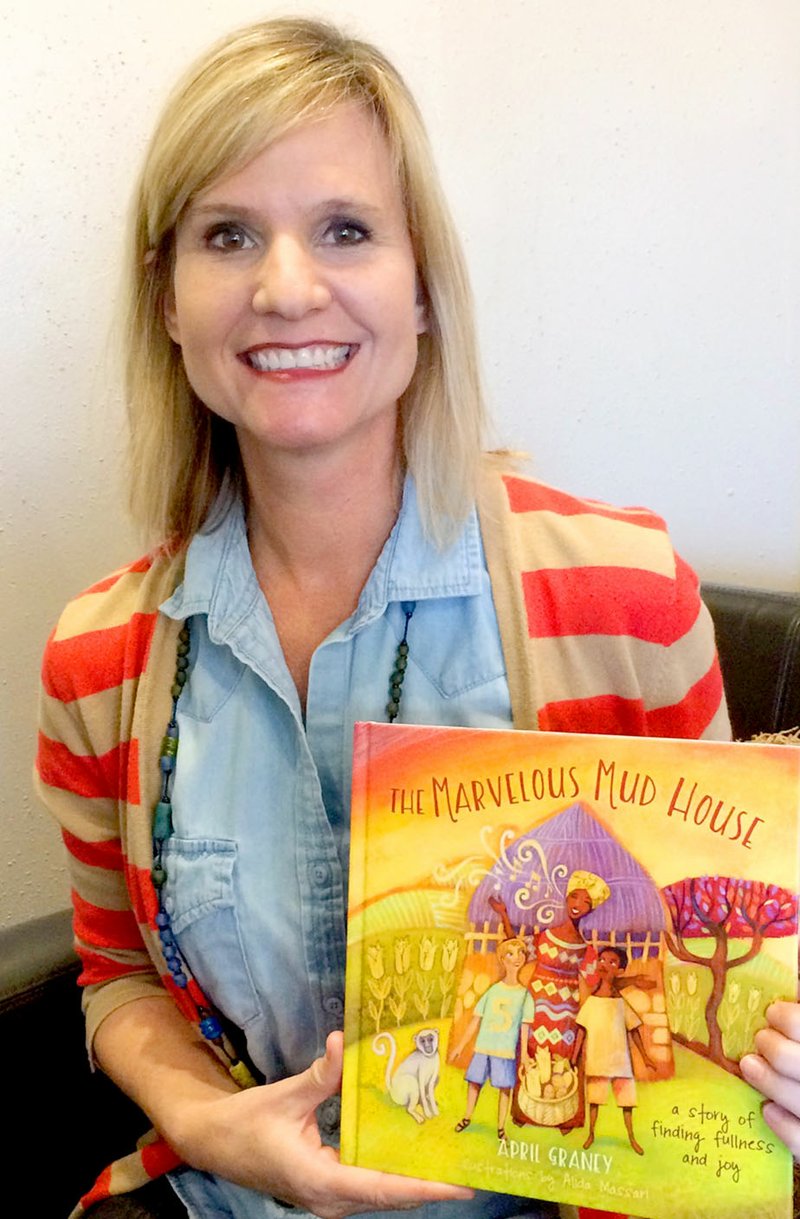 Photo submitted Pictured are April Graney and her family during a 2013 trip to Kenya, which inspired her to write the book, &#8220;The Marvelous Mud House,&#8221; which is scheduled to be released Sunday, Oct. 1.

A trip to Africa inspired local author April Graney to write a children's book about the important life lessons a family in Oklahoma and a family in Kenya learned from each other.

The Marvelous Mud House, published by B&H Publishing, a division of Lifeway Christian Resources, is scheduled to be released Sunday, Oct. 1. The book is illustrated by Alida Massari, a well-known children's illustrator who has worked for publishers such as Harper Collins, Oxford University Press and Usborne.

In the story, Ben and his American family live in a hungry ranch house in Oklahoma, where they are always wanting more. They travel across the world to Kenya, where they meet George and Mama George who live in a marvelous mud house. There, among the mango trees, they discover a marvelous lesson about what it's like to be full of joy instead, the book description states.

In the story, the Smith family is overrun by possessions while in contrast George and Mama George live in a lush beautiful setting where possessions are few but joy and peace abound, Graney said. The visit changes the Smith family's perspective about what is important in life.

Meanwhile, George wants to go to school but isn't sure how he is going to afford the fees.

Throughout the story, Mama George sings to her son, "We're rich, my son, rich in love, strength, and life. The giver of these hears every cry. Let's lift up our hands to the God who provides."

The story is inspired by Graney's September 2013 trip to Kenya with her husband Tom and their five children. The family lives in Colcord, Okla., and Tom and April run New Life Ranch. The Graney family spent two weeks in the African country with April's brother, who is a missionary doctor, and his family.

While some of the sights and extreme poverty were hard to see, April was inspired by the faith and joy of the people she met there.

George and his mother Agnes are real people, and the book is based on the true story of the Graney family deciding to help George pay for school. April explained that in Kenyan culture, a mother is called by the name of her oldest child, so George's mother's nickname is Mama George.

The character of Mama George is actually inspired by a combination of three women -- Agnes, Sally and Ednah. While Graney's family didn't get to visit George and Agnes' home because it was too far away, they did get to visit Sally and Ednah's home. All three women shared their joy and faith, and cared for the Graney family while they were in Kenya.

When the Graney family returned home, April's brother told her that school fees are a big way to help because even though school is free, there are a lot of fees for clothing and books. In addition, secondary school, which is equivalent to high school, is not free.

April talked to her children about the need for school fees, and the kids had a meeting on the back porch and decided what kind of chores and jobs they could do to earn money to help.

"We started praying about who should we send the money to," April said. "We met Agnes, and we met her kids and she just stood out to me, how joyful and happy she was, and how she served us."

The Graney family sent word through April's sister-in-law about their plans to sponsor George's high school fees. April found out after the fact that Agnes had been praying and telling George that God would provide.

April's sister-in-law messaged back that Agnes was so filled with joy when she heard the news that she starting jumping up and down and crying. April imagined her running the two miles home to tell George the good news.

"I just imagined her running back home to tell George the news 'God has provided, you get to go to school,' and I just imagined how exciting a moment that would be," April said.

That night, April got up at 2 a.m. and wrote the first draft of her book in about an hour.

"The Marvelous Mud House is not just a story about helping the poor," April said. "It's about what we can learn from those living in poverty. God has chosen the poor in the eyes of the world to be rich in faith."

Although the first draft came easy, the real work would take much longer. April sent it to a couple of friends who connected her with a writing coach, who challenged her to rewrite the story to make readers more clearly understand her message. April estimated that she wrote 15 drafts of the story and revised and worked on it for almost a year before it took its final form.

The Graney family ended up sponsoring George for all four years of high school and he is set to graduate in December. They have also sponsored a teenage girl in Uganda and another boy in the Dominican Republic.

April hopes the children's story will inspire parents and children to action.

"I don't want parents and children to just read The Marvelous Mud House and think it's a great story," April said. "I want it to inspire them to action. I want them to open up a lemonade stand and give their profits to the local homeless shelter. I want them to get on Compassion's website with their parents and choose to sponsor a child. I want them to be content with what they have and find joy in helping others."

More information about the book is available online at www.bhpublishinggroup.com/products/the-marvelous-mud-house. The book can be purchased at Lifeway Christian Stores, or online at Amazon, Barnes & Noble or Lifeway's website, lifeway.com.