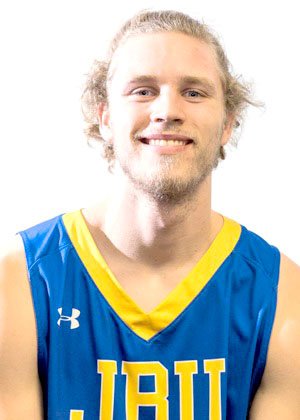 "What an exciting honor for Jake to be named an All-American," head coach Jason Beschta said. "Our coaching staff and Jake's teammates are all so proud of him for earning this. While an honor like this is a recognition of the tremendous season he had for us, it speaks to a whole lot more about Jake. It is the culmination of all of the countless extra hours (outside of practice) that he has put in leading up to this season to make himself into the player that he is.

"It's the way he practiced every day setting the tone for how hard our players should work and how focused they need to be. It's a recognition of the tireless determination and relentless pursuit of greatness that he has consistently modeled. It's in the way he is so teachable and desires to learn how to improve, and then he works to make those improvements. Jake has certainly earned the respect of anyone who knows him, and I am excited to see how he continues to grow throughout the rest of his time at JBU."

This year's recipient of the SAC Sportsmanship Award, Caudle finished the season leading the Golden Eagles in scoring (18.6) and shooting both behind the 3-point arc (42.6 percent), while hitting 50.8 percent of his shots from the field, good enough for second on the team. He paced the team in field goals (189), triples (92) and free throws made (88). The Bentonville, Ark., native produced 25 double-figure scoring games with 11 of 20 or more and four of 30 or more, including a career-best 38 points in JBU's win over Evangel on Nov. 11. Having just eclipsed the 1,000-point mark in his career, he is just 390 points away from cracking the program's top 10 all-time scoring list.

The guard finished 2017-18 ranked sixth in the nation in total triples and 11th in triples per game (3.1). He also landed 13th nationally in total points (558). His 92 treys are tied for sixth all-time in a single season program history while his 558 points lands him at 12th all-time.