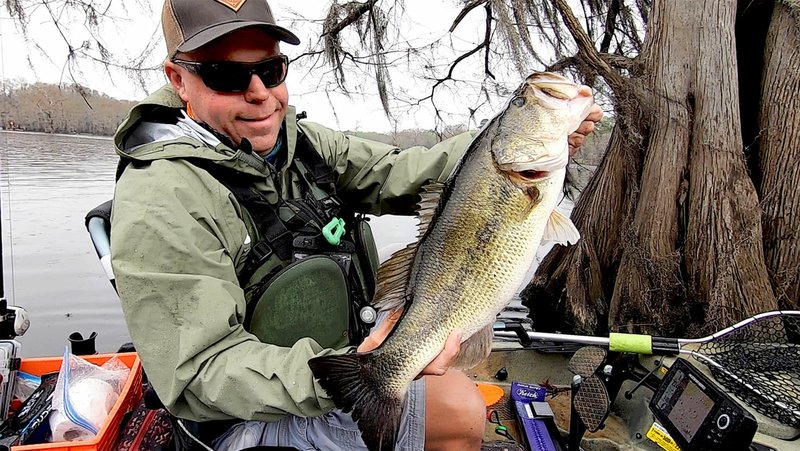 Photo submitted Dwain Batey of Siloam Springs held up a fish during the 2019 Kayak Bass Fishing National Championship in Shreveport, La., on March 28 through 30. His placement in the top 10 at the national championship qualifies him and pays for his entry fees to go on to two upcoming professional Kayak Bass Fishing tournaments being hosted in partnership with the Fishing League Worldwide (FLW).

A passion for bass fishing and art has taken Siloam Springs resident Dwain Batey to the top of his sport.

Batey placed ninth out of 461 competitors in the 2019 Kayak Bass Fishing (KBF) National Championship in Shreveport, La., on March 28-30. His placement in the top 10 qualifies him and pays for his entry fees to go on to two upcoming professional KBF tournaments being hosted in partnership with Fishing League Worldwide (FLW).

During the three-day national championship, anglers were allowed to catch up to five bass a day, totaling the inches to determine the winners. In total, Batey caught a total of 260 inches of fish, including one very large 10.64 pound 24-inch fish. Coincidentally Batey's best catch didn't even make the biggest fish of the hour since a Texas angler caught the largest fish of the tournament -- a 25.25-inch bass -- around the same time.

Batey's team -- the Ketch Team sponsored by Ketch Products -- also placed third in the team challenge portion of the KBF National Championship, earning the team the opportunity to be filmed with Chad Hoover, founder of KBF, on his television show Kayak Bassin'.

The show airs on WFN, the Outdoor Channel and the Sportsman Channel. It will be the second time that Batey has filmed with the show, he first appeared on the show on the Bella Vista Lakes after winning two KBF Trail events in 2017.

Batey's love for bass fishing and art started when he was about 2 years old and set him on a trajectory towards his current career. He was born in Idabel, Okla., and lived in Ada, Okla., for many years before moving to Siloam Springs in 1999. He grew up fishing tournaments from bass boats in Oklahoma and his interests led him into a career of painting custom baits for Skirmish Baits.

"Once I got into it, there was lots of opportunity," he said. "It's the fastest growing part of bass fishing right now."

One of the biggest reasons kayak fishing is growing so fast is that bass boats are very expensive, Batey said. An entry level bass boat can cost more than $50,000. In comparison, an entry level kayak costs around $200 while a top-of-the-line model with everything included might cost $5,000, he said.

"The community around kayak fishing is just so much more relaxed and more open than the bass boat community as well, which is great," he said.

In addition to being more economical for anglers who would like to try the sport, kayak bass fishing offers several other key advantages, according to the KBF website, www.kayakbassfishing.com. It is healthier for anglers and the ecosystem, and practices better stewardship of the environment.

Kayaks are quieter than bass boats and fish will often swim right up beside the kayaks, Batey said. They can also get into more places than traditional boats, he said. Some kayak anglers use traditional paddles to get around the lake, while others use a foot pedal system (his preferred method) or electric trolling motors, he said.

Kayak fishing tournaments are also easier on fish, according to Batey. When anglers catch a fish, they measure it on a board along with a marker for the day and take a picture with their phone, then use their phone to submit the picture to a tournament management ap. The fish is then released in the same location it is caught with no delay. In comparison, during traditional fishing tournaments, fish are kept in live wells for hours, measured and weighed and then released in a different part of the lake, which can cause trauma or mortality.

"As far as conservation, it's also a better system," he said.

Batey has made his living selling custom painted baits for many years, but he hopes to transition into a full-time career in professional kayak bass fishing over the next few years, he said.

Batey is currently sponsored by Ketch Products, the Hobie Kayak Fishing Team and his local kayak shop, OMTC of Garfield.

In addition to the two professional tournaments held in conjunction with FLW Batey will be participating in this year, a full professional series is planned for 2020.

The first tournament will be the FLW Tour at Lake Chickamauga in Tennessee on May 4-5. Anglers who qualify at that event will advance on to the FLW Cup at Lake Hamilton near Hot Springs, however Batey's top 10 placement at the national championship already qualifies him for both events.

Kayak anglers will be competing on separate nearby fisheries from FLW tour pros, however KBF winners will be recognized on the FLW tour stage and will be featured in FLW's media outlets, according to a press release from the FLW.

"Kayak fishing has become incredibly popular in recent years and continues to grow," said Dave Washburn, FLW vice president of operations. "We are excited to work with KBF as the kayak-fishing community leader to elevate the sport to new highs with tournaments offering 100 percent payouts throughout the course of the season and the biggest media platform available to kayak anglers."