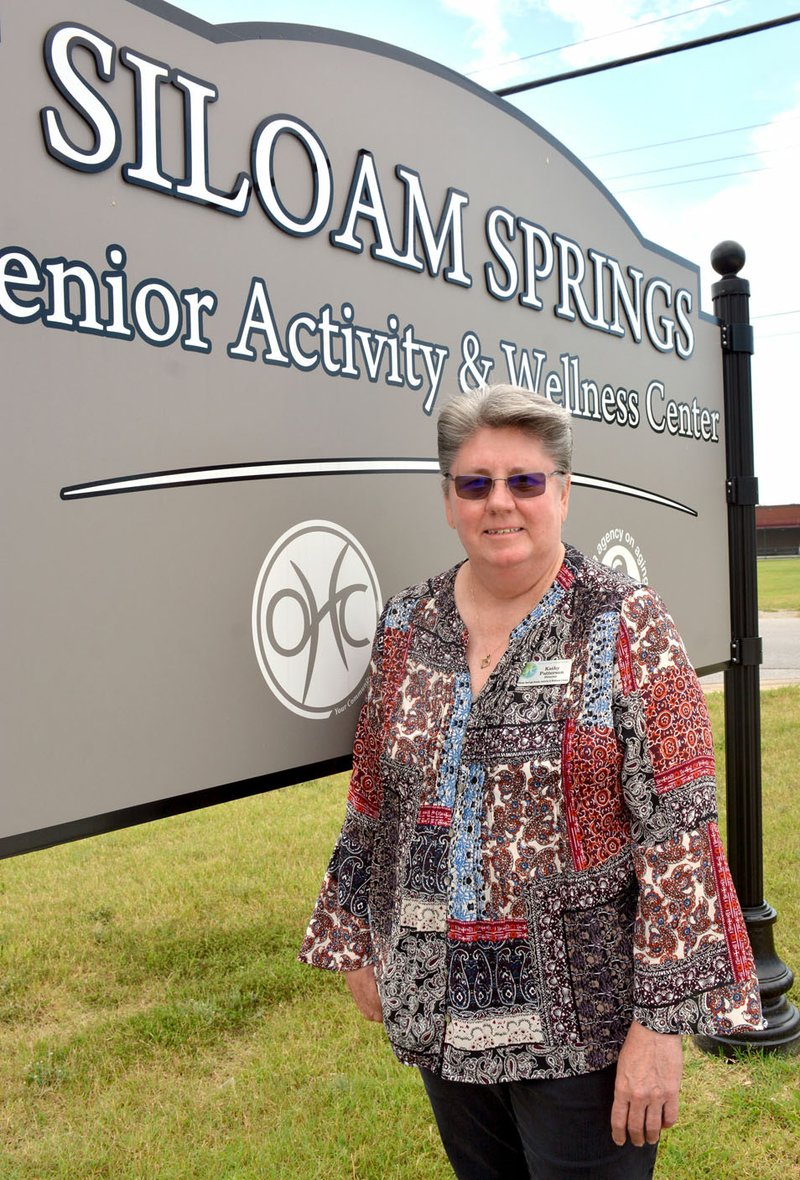 Janelle Jessen/Siloam Sunday Kathy Patterson, director of the Siloam Springs Senior Activity and Wellness Center, is retiring at the end of the month. A community retirement party is planned for 11 a.m. Wednesday, Aug. 28.

When Kathy Patterson took a part-time job delivering meals on wheels for the Gentry Senior Center in 1985 she had no idea where it would lead her.

It wasn't long before Patterson fell in love with both the job and the people the center serves, she said. She would go on to become a full-time van driver in 1988, delivering seniors to appointments and taking them shopping, before becoming director of Siloam Springs Senior Activity and Wellness Center in 1996. As director, she would oversee the growth of the center as the current facility at 750 Heritage Court was built and then expanded to serve thousands of people each year.

Early 1970’s — Seniors met one day a week in the Presbyterian Church.

1973 — The center moved to the Old Park Hotel Building on West University Street.

1975 — The center moved to the basement of the First Methodist Church, which was not handicap accessible because of stairs.

1989 — The center moved to the Community Building of Heritage Heights Apartments on West Tulsa Street.

2008 — The center moved into its present building at 750 Heritage Court.

2014 — Additional rooms were completed on both ends of the building.

2019 — The parking lot on the south end of the building was completed.

Currently, the center provides transportation, meals and a place for people age 60 and up to go for entertainment, wellness activities and socializing. Last year, the center served more than 13,000 meals on site and delivered more than 19,000 meals. It also provided 13,000 units of social interaction -- measured when a person spends time or does an activity at the center -- and gave 3,000 rides to local seniors.

Now, after a 34-year career, Patterson is planning to retire at the end of the month and hand the reins over to new director Kendra Burnett. The community is invited to a retirement party at 11 a.m. Wednesday, Aug. 28 and those who attend are encouraged to bring personalized cards.

"(Kathy) absolutely loves her center and her seniors, and her seniors love her," said Susan Moore, CEO of the Office of Human Concern, which operates the seven senior centers in Benton and Washington County in partnership with the Area Agency on Aging.

Moore has worked with Patterson for the past 12 years, first as a fellow senior center director and then as the CEO of the organization. Patterson listens to the seniors and works hard to provide them with the activities they are most interested in, Moore said. She also keeps her center spotless and sparkling clean, she said.

Ed Straubing has been coming to the Siloam Springs Senior Center for seven or eight years. As someone who spent his career in management, Straubing said that he has been impressed with Patterson's management abilities and knowledge about every operation in the senior center.

"I'm going to miss her personally," Straubing said. "I'll miss her myself because of the way she did around this place and I know a lot of people will miss her."

Debi Holroyd, who has served as assistant director since 2006, said that Patterson has had a major impact on the senior center.

She described Patterson as fair, a good listener, and someone who always gives things careful thought before making a decision. Patterson is also respected by all the employees and patrons of the senior center, Holroyd said.

"She's very good," Holroyd said. "They love her and she loves them."

Will Hightower was a van driver for the senior center for 17 years until 2013 and has been coming to the center as a patron ever since.

Hightower said that Patterson became a good friend while they were working together and their friendship has continued ever since.

"Everybody just loves her," he said.

The best part of working at the senior center has been getting to know the people and learning their stories, Patterson said. She also has enjoyed that no two days have ever been alike.

"It's been a fun journey, a lot of water under the bridge," she said.

In her retirement, Patterson said she plans to keep busy and will likely continue to be a familiar face at the senior center so she can come back and have fun.

Patterson said she is confident she is leaving the center in good hands. Burnett has had six months of training and worked alongside Patterson for the past three months to prepare for the job of director.

"We're really going to miss her, not only as a director, but certainly we enjoy just having her work for our agency," Moore said. "She's a great director but also a great person."