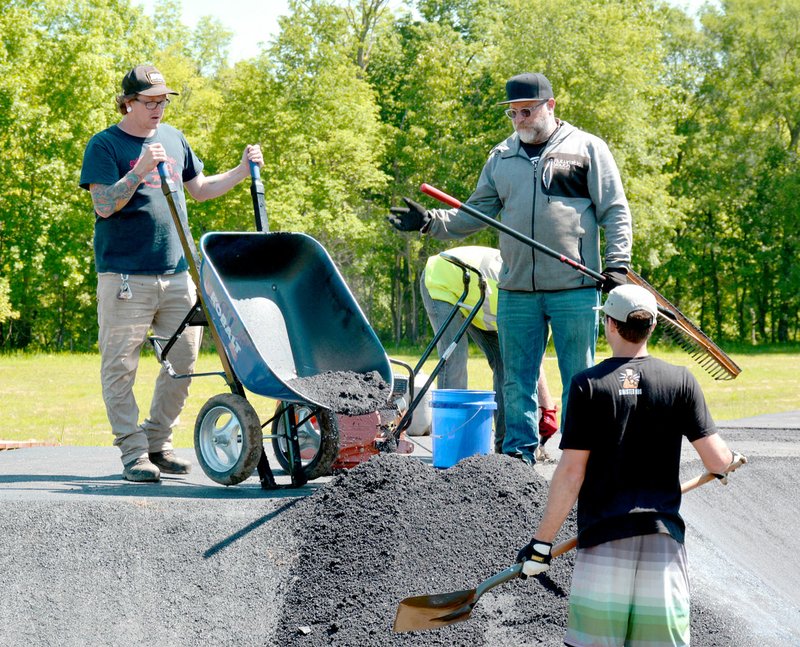 Janelle Jessen/Herald-Leader Volunteers helped Tom Ritz, of Pump Track USA, work on the track at City Lake Park in May. The pump track is just one of many features the new park has to offer, including mountain bike trails, walking trails, a bird blind and a 505-foot wooden bridge spanning the wetlands. A grand opening is planned for Aug. 10.

Over the past three years, City Lake Park has undergone a makeover that makes it more accessible to the public for uses such as mountain biking and walking, while preserving the natural beauty and wildlife habitat.

City Lake park will give residents the opportunity to enjoy recreational activities in their own community as well as become a regional destination that offers something for everyone, whether its mountain biking, kayaking on the lake or just going for a stroll, according to Don Clark, city community development director.

"As far as it being a destinational area, it's there because what we have is special," said Jon Boles, city parks and recreation department manager. "We didn't concentrate on one thing ... you can bring your kayak, your mountain bike, you can watch birds, you can go on a little walk with your significant other on the board walk and it is pretty neat."

The city has been the steward of City Lake for some time but the new park has been in the works since 2016, Clark said. The total cost of the project was $1.25 million, which includes public money, support from the Walton Family Foundation and and a grant from the state.

The park was also made possible through lots of sweat equity from volunteers, Clark said.

Volunteers have spent thousands of hours making the park a reality, according to David Vansandt, president of the Borderline chapter of Ozark Off Road Cyclicsts (OORC). Volunteers of all ages and walks of life took part in the project. They not only gave their time, but also offered their construction skills and heavy equipment, he said.

The city contracted with Ozark off Road Cyclists (OORC) to oversee the development of the park. The nonprofit then subcontracted with various organizations to complete different parts of the project, Vansandt said.

"I am absolutely stoked to see it open," Vansandt said. "In the last couple of months we've had people out riding it, every one of us (volunteers) stopped and looked at the group because that is exactly why we wanted to build it. I'm looking forward to Saturday and the grand opening. It's kind of surreal and I can't wait to get the project over with and be able to get out there and get tires on the ground riding it."

Those attending the grand opening on Saturday should bring refillable water bottles. If the new parking lot near the trail head and skills course should fill up, parking will not be allowed along Dawn Hill Road. However, overflow parking is available at the lake access on the south side of the park and the mountain bike trails on the north side.