The private school serves students in kindergarten through sixth grade. by Janelle Jessen | August 19, 2019 at 11:35 a.m. 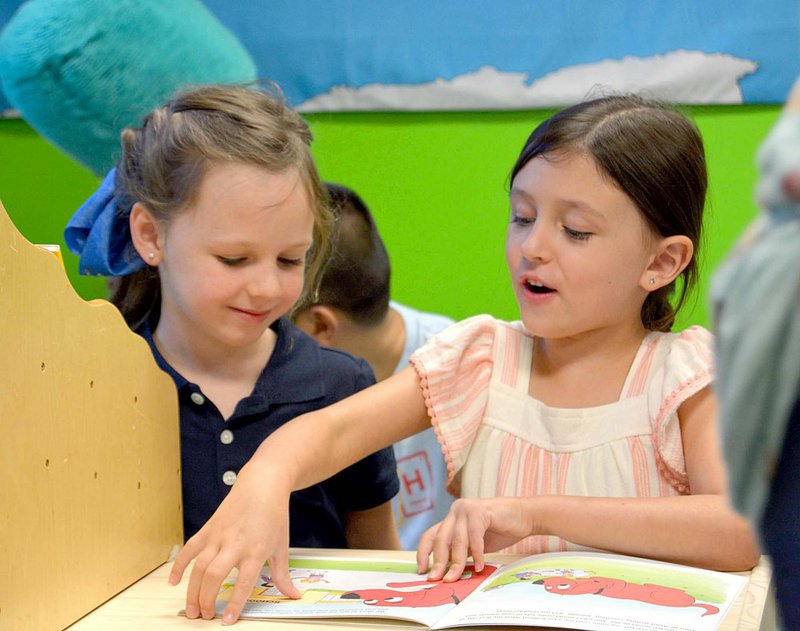 Meagan Dees/Special to the Herald-Leader Kindergarten students Hayden Butler and Mia Young read together during an open house event at Sager Classical Academy on Monday.

A new school in Siloam Springs is offering the community the option of classical Christian education.

Sager Classical Academy opened on Wednesday with 49 students in grades kindergarten through sixth grade, according to Jessica Hooten Wilson, school board chair, and Chad Raith, board member. The academy is renting space for six classrooms in the children’s wing of First Baptist Church, although they are not affiliated with any specific denomination, they said. Students of all faith backgrounds, or of no faith at all, are welcome at the school, Raith said.

The academy’s six-member board decided to create the school to fill a need in the community, Raith said.

“Siloam Springs is a growing community and most communities the size of Siloam Springs have a number of educational options that make them dynamic and rich,” Raith said. “We didn’t in Siloam Springs so one way to contribute to town’s culture and needs is to offer another way of education to compliment the other ones.”

The board was hoping to have 15 to 20 students the first year, but there was so much interest, the academy ended up having to cap the number of students at 49 and create a waiting list, Wilson said. The board hopes to add a grade each year as their students advance, she said.

Students will attend school from 8 a.m. to noon, Monday through Thursday, with optional homework tutoring available in the afternoon, Wilson said. They will start each day with a chapel, which is focused on broad Christian topics instead of the beliefs of any particular denomination, Raith said.

On Friday, the school will host cultural days, which will be open to other children in the community, where local experts will teach subjects such as art, music and baking, Wilson said.

Classical Christian education is focused on getting back to the basics of how students were taught during Greek and Roman times and finding the most fruitful ways of educating students from the beginning that may have been diluted or lost over time, Wilson said.

Students begin learning in the grammar stage, in kindergarten through grade six, where they memorize facts and gain knowledge, Wilson said. Then in their middle school years students move into the logic stage where they start asking questions and synthesizing what they have learned. Finally, they move into the rhetoric state where they learn to express themselves, learn independently and showcase what they have learned, she said.

“Classical education is done best in a historical sense when you do see all truth, goodness and beauty as coming from God and going back to God,” Raith said. “That means all of his creation should be studied at a real, rigorous depth. That is why math is important, science is important, because you’re really at the bottom of how we do education studying God’s creation.”

Raith said he feels classical education goes deeper than other models because of its higher purpose.

“We don’t compromise any of our rigor based on religious belief,” he said.

Classical education doesn’t teach to a test, but instead individualizes the education for students’ needs and takes a holistic approach, Wilson and Raith said. However, college admissions tests such as the ACT and SAT show that classically educated students are far ahead of their peers, Raith said.

As college professors, Wilson and Raith said they see the difference in college students who received a classical education.

“Our objective is so far beyond the test, we really want them to keep that love for learning and know how to keep doing it,” Wilson said.

The school has six teachers, four of whom are certified, and class sizes are capped at 12 students, Raith and Wilson said. Some of the teachers come from public school, while others have a background in teaching at private school, are home school parents or recent John Brown University graduates.

The academy’s board members also have rich educational backgrounds, including several engineers, college professors and an artist. For example, Wilson is an associate professor of literature at John Brown University and a former teacher at Covenant Classical School in Fort Worth, Texas, and Raith is vice president of mission and ethics for Mercy Health, an adjunct professor of business in the MBA program at John Brown University and an instructor of theology for Regent College, in Vancouver, B.C.

Most schools do not earn accreditation until they begin to graduate high school students, so Sager Classical Academy isn’t currently accredited with any organizations, Wilson said. Parents are asked to register their children as home schooled and use the academy as an educational resource, she said.

Wilson and Raith said the board has worked to keep tuition as affordable as possible, under $3,000 a year, and is working to raise money for scholarship funds so that finances won’t be a barrier to students who want to access classical education.

More information about the school is available at sageracademy.com.