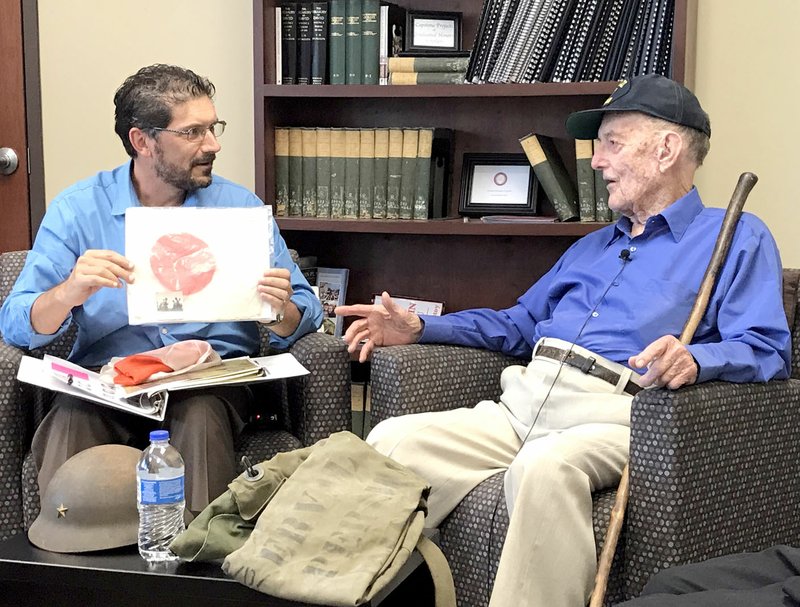 File photo/Herald-Leader Preston Jones interviewed Val Pariman for the last time in April for one of Jones' advanced history classes at John Brown University. The World War II veteran died on Aug. 11 at the age of 94.

The last Second World War veteran I personally knew died on Aug. 11. In his later years, Val Periman was keen to discuss his experiences in the war as a medic serving in the Pacific, mostly as part of the force that liberated the Philippines from the Japanese. I first met Val at a convalescent home here in Siloam Springs. Over the next several months, he visited JBU three times. We were fortunate to video record what he said. The Herald-Leader published a lengthy story about Val in late April.

Over the years, I had the privilege of speaking with some of Siloam Springs' other WWII veterans. Bennett Howell's B-17 was shot down over France, and he spent a year as a prisoner of the Germans. John Brown Jr., a future president of the university bearing his name, was a naval officer in the Pacific. Grady Lamb was even more self-deprecating than the typical WWII veteran. I didn't learn until a third interview with him that a ship he served on had been struck by a Japanese kamikaze. Grady had told me before that his ship had returned to California for repairs, but he hadn't said why.

News of Val's death saddens me not only because he represented my last personal link to the Second World War. Val's death also saddens me because it represents the loss to the country of a way of being. I'm not one for clichés, catch phrases or fads, but I have never questioned the label "Greatest Generation" pinned to the cohort of young people who grew up in the Great Depression, fought the largest war in human history, and then built the wealthiest economy the world has ever seen. We still benefit from that, though few of us really appreciate it.

The first WWII veteran I interviewed visited a class of mine in 1998. I was the youngest member of a discussion group in California. One of the older men wore an eye patch. Somehow, I heard that his eye had been lost in the war. I have a vivid memory of the story he told about being pinned down in a shallow crater for hours by a German machine gunner. My regret is that I didn't record the interview. I started doing so only a few years ago.

Many World War II veterans were reluctant to share their stories. I quickly learned that if I framed the interview as a way to educate young people, then few would turn down a request. In fact, I can't recall a single WWII veteran declining to share about his service if doing so was linked in his mind to the good of the community--to the education of others. Surely the WWII generation had its share of jerks, but over 20 years of interviewing them, I can recall just one who fit that description. But even he was willing to share if there was a purpose greater than simply talking.

The other day, I saw that a Vietnam veteran from Lowell had passed away. He served as a Navy corpsman with the Marines at Con Thien in 1967. He participated in one of the toughest fights of that very tough war. My heart sank knowing that I would never have a chance to hear from him, that my students would never have a chance to learn from him. Perhaps someone else recorded his story. But if he was like most Vietnam veterans, probably not. That's sad, and it's a loss to everyone.

Late in life, Val saw the importance of sharing some of his war memories. Some of these were inspiring, some were difficult, all were important. I hope other warzone veterans in Siloam Springs and the area will follow his lead.

-- Preston Jones teaches at JBU and posts interviews with veterans at warandlifediscussions.weebly.com. He can be reached at [email protected] and 479-238-8688. The opinions expressed are those of the author.

Print Headline: Farewell to a veteran