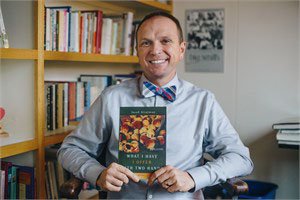 Photo Submitted Professor Jacob Stratman holding a copy of his book What I Have I Offer with Two Hands. The professor will have a book signing at 7:30 p.m. Tuesday at JBU's Simmons Great Hall.

Jacob Stratman, PhD., an English professor at John Brown University, will hold a book signing at Simmons Great Hall at 7:30 p.m. Tuesday, Dec. 3, for his new book of poems, "What I Have I Offer with Two Hands."

Stratman, who just published his first book of poems according to a press release, said he wrote this book for several reasons, most of which relate to his family.

"They're written for my sons, about them, about the world, about the natural world, about their life of faith, about parenting, about family," Stratman said. "The project came to show itself more as I thought more about being a parent in this world."

Stratman said if he was going to write a book he wanted it to be about a subject he cared about. He said he thought about being a parent and about the joys and problems that surround parenthood and believed this was a subject that he could write about.

Stratman said he began writing his book in 2015. He added that this is his first published book outside of academic writing. He said the most difficult part of writing the book was the actual writing itself.

"That's the hardest part for me," he said. "It's just the initial writing."

Stratman said he enjoyed editing his work, tinkering with things and changing words around. Stratman believes his difficulty in writing the book probably had to do with the fear the material would not sound right. He said he likes the compactness in language that a poem brings and how a poem can focus on a particular image.

"The words can paint that," Stratman said. "I think I'm better at doing that than in long form."

The other difficulty Stratman found was getting his work published. He said he believes the writing life is one of rejection. Stratman said he spoke to some of his students and realized rejection is part of the business. Stratman credits an editor for a poetry magazine, in which some of his poems were published, for writing a letter of introduction to the editor of Cascade Books' Poiema Poetry series.

When asked if he had any final thoughts, Stratman encouraged everybody to visit the Siloam Springs Public Library. He said he loves what the library does in the community.

"I love how the library is continually encouraging reading and writing and being a part of books," Stratman said.

Stratman said he would not be doing what he is doing if he did not have access to books.