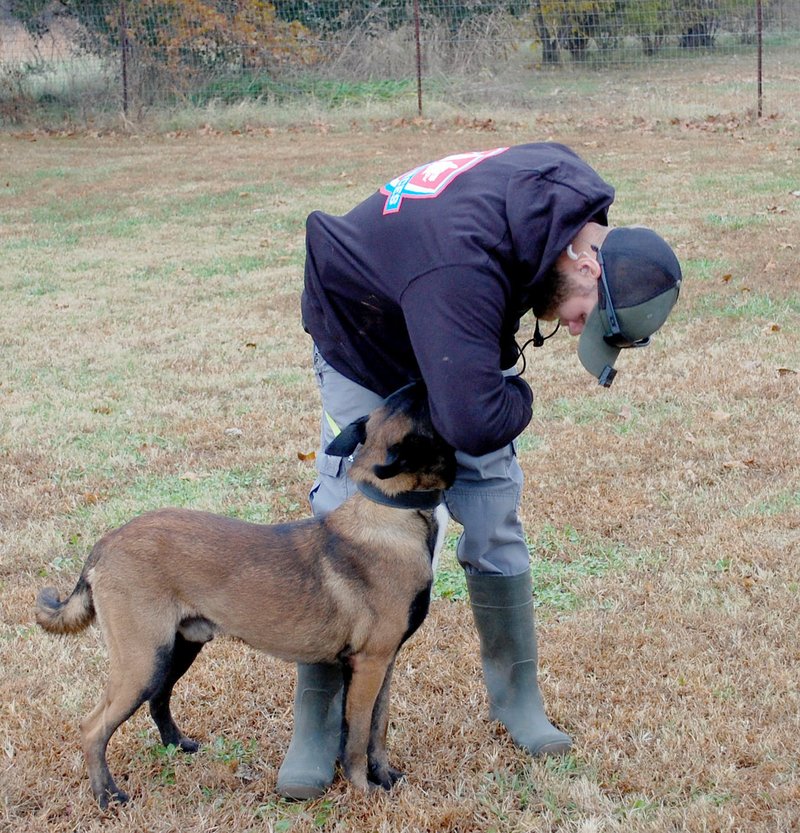 Joint Forces, located at 17606 Ark. Hwy. 16, has been in business for three and a half years and offers other services such as protection, sports and service animal training. Drug detection is a new service for the company.

Drug detection by private entities is a service that has become popular across the nation, according to Robert Shewmake, owner of Joint Forces K9 Group.

Shewmake started Joint Forces because he wanted to make a difference in the dog training community, offer quality dog training to the public and help avoid dogs being put down, he said. Shewmake served in the U.S. Army, in the military police and as a civilian police officer in the Johnston Atoll Law Enforcement department on the island of Johnston Atoll near Hawaii. Shewmake said he had trained sport dogs at the time he opened Joint Forces.

Joint Forces initially started as a dog import business, according to Shewmake. The business had made partnerships with a few European breeders and began importing dogs for personal and property protection, sports such as hunting and agility, service.

Shewmake said the new service begins this month. The organization presently has one team that is certified for drug detection.

"We just certified our first team, which is going to be Zeke (Johnson) and K9 Duke, through a national organization (Drug Beat), so now we have a certified narcotics team," Shewmake said. "A team being a handler and a dog."

Some people prefer privacy over calling the police department and requesting a K9 unit, Shewmake said.

"There is a need for private detection work in this area so people can have discreet searches for businesses, private schools and residential," he said. "If a business does not want their problem released onto social media, the press or even to law enforcement, this service can be beneficial."

According to Shewmake, prices will vary depending on what kind of entity is requesting the service.

"It will start at approximately $200 to search a home," Shewmake said. "School, that's going to go by the hour. So it will start at $200 and if we have to search an entire school you are probably talking $700."

Johnson, who is the human component of Joint Forces' first narcotics detection team, graduated from US K9 Unlimited Inc. in Abbeville, La. Johnson served in the military police in the Marine Corps, but did not work with the K9 unit, he said.

His desire to train dogs came when he rescued his dog, Buck, and began working with him, Johnson said. Although Buck is not part of Joint Forces, he did attend US K9 with Johnson and has been socialized and trained to be a bomb disposal dog and a tracking dog.

Duke is a Belgium Malinois according to Johnson. He attended the Little Rock K-9 Academy and became a part of Joint Forces in October of this year, according to Kason Newman, the operations manager for Joint Forces. Newman added that Johnson and Duke were certified together at the time the organization acquired Duke.

According to Shewmake, service dogs come from either the company's dogs that lack the drive to do protection work or trainers from Joint Forces will visit animal shelters to screen dogs to see if they have the right disposition to be a service animal.

"One of the biggest things is that the dog has to be social," Shewmake said. "The dog is going to have to be environmentally sound so the dog can't be afraid of slippery floors, grated steps, can get on an elevator, can get on an escalator, is not dog reactive and is not reactive to people. Those are the things that we are looking for."

"If you are having problems with your dog, don't give up on your dog, bring your dog in to us, let us evaluate the dog and (see) what's going on and let's come up with a solution so you can have a nice, long, enjoyable life together," Shewmake said.

The future looks bright, Shewmake said. The business is planning on building a 3,800-square-foot indoor training facility so the company can offer indoor group classes and they are bringing on new trainers which will increase the number of trainers to seven.

In its three and a half years in business, Joint Forces has developed a loyal clientele. Janice and Steven Calvert have been bringing their dogs Molly and Rose for obedience training. The Calverts heard about Joint Forces through friends that have used the company's services and have been pleased with the results.

"Money well spent," Janice Calvert said. "Give them a try. If you have a dog that's misbehaving, give them a call."