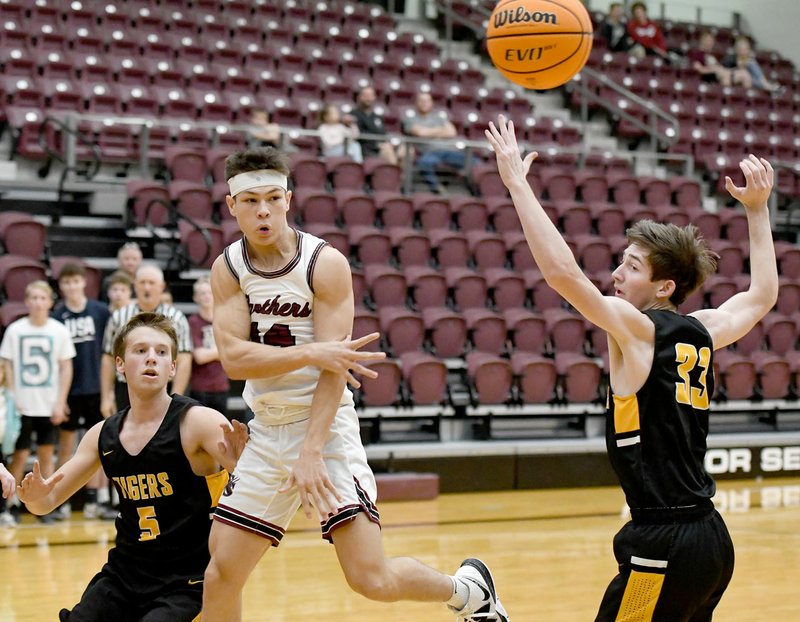 Siloam Springs' boys made just enough plays down the stretch to hold off Prairie Grove 53-51 on Tuesday in a nonconference boys basketball game inside Panther Activity Center.

The Panthers (2-0) opened up a seven-point lead in the fourth quarter after a Landon Ward basket in transition, but Prairie Grove wasn't through.

Evan Sauer hit a free throw with 27.2 seconds remaining to give Siloam Springs a 53-51 lead and the Tigers had a shot to tie or take the lead.

But Prairie Grove struggled to get a good look on its final possession and Sloan Smith put up an awkward attempt. The Panthers batted the rebound in the air as time expired and held on for the win.

"Really, really proud of the boys for stepping up and making some timely plays on offense," Siloam Springs coach Tim Stewart said. "We did some things tonight that we've struggled with in the first two games. Tonight we were able to pull it out and make them come chase us and get layups. I thought that kind of changed the game late. Defense is still a project. We're not there yet, but the energy and effort is there. It will continue to get better."

Siloam Springs led 10-7 after the first quarter, but Prairie Grove flipped the script in the second quarter. Von Bergen hit three straight 3-pointers and the Tigers opened up a 18-12 lead.

Prairie Grove would lead 25-24 at halftime, but the Panthers rallied to take a 38-37 lead into the fourth quarter. Two baskets by Josh Stewart, one from Sauer and a pair of free throws by Ward gave the Panthers a two-possession lead in the quarter and Siloam Springs ran the clock with its passing game heading into the final minute.

After Edmiston's 3-pointer to cut the lead to three, a costly Siloam Springs turnover out of a timeout gave the Tigers a chance.

Prairie Grove coach Steve Edmiston was happy the Tigers were able to stay close enough to have a shot to win at the end.

"I thought we did a great job of keeping ourselves in the game late," Edmiston said. "Giving ourselves an opportunity to have the ball with 25 seconds left, down two, I thought was a good accomplishment on our part. We've just got to follow through. That's a situation where you've got to get a shot off of some sort, and we had a couple of opportunities to get that shot. We just kind of passed on it."

Drew Vachon led Siloam Springs with 16 points, while Ward had 15 and Josh Stewart and Sauer each with 10. Jackson Ford also had two points for the Panthers.

The Panthers are scheduled to return to action this week against a pair of Class 6A teams, beginning Tuesday at Rogers before playing at Van Buren on Friday.

"It will get us ready for the conference," Stewart said. "Those two teams are going to show us some things that we need to see. It's going to be a great challenge."