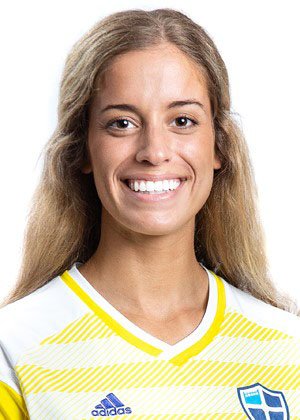 Junior Caitlyn Logan was once again tabbed as the league's top keeper, earning Goalkeeper of the Year honors in consecutive seasons, while senior Sarah Hughes shared the top defensive honor in a three-way tie for Defensive Player of the Year.

Logan and Hughes were joined by senior Anne Metz on the first team. Senior Kristen Howell, junior Sienna Nealon and freshman Emma Schoenberg were selected to the second team.

Hutto, a Siloam Springs native, enjoyed a first season with the Golden Eagles by posting seven goals and six assists (20 points) to finish second on the team in scoring. The sophomore kicked in the game-winner versus Wayland Baptist (Oct. 19) in a two-goal effort. She started 18 of 19 games on the season and logged over 1,200 minutes while totaling 36 shot attempts, 19 on target.

Logan returned to the first team for a second time as she backstopped the Golden Eagles to just 12 goals against in 19 matches (0.61 average) while playing every minute (1,558) between the three posts. The product of Charlotte, N.C., racked up a 12-3-4 record while posting 12 clean sheets on the season, tying her single-season program record set last season. With a 3-0 win over Wayland Baptist (Oct. 19) the junior moved into second place on the all-time career shutouts leaderboard and currently has a total of 25 career clean sheets. Logan set a new single-season career high by stopping 58 of 70 shots in 2019, an .829 save percentage.

For a second-straight season, Hughes lands on the All-SAC first team after anchoring the John Brown back line to a 0.61 goals-against average, allowing just 12 goals against in 19 matches. Starting all 19 contests, the Albuquerque, N.M., native logged the highest number of minutes of any JBU field player with 1,598 as the senior played the entire match on 12 occasions in 19 matches. She also added a goal and a pair of assists (four points) on the season.

Metz, a two-time first team selection, led the John Brown scoring effort in the 2019 season, posting a team-best 10 goals and eight assists (28) points and was one of two Golden Eagles (Hutto) to eclipse the 20-point mark on the season. After redshirting last season, Metz's eight goals, a single-season career best, accounted for nearly 20 percent of the JBU scoring effort as she started 17 games in the 2019 campaign. The Kilgore, Texas, product tallied her first game-winner versus Concordia (Aug. 29) before heading in the winner in the regular-season finale versus Mid-America Christian (Nov. 5). She logged 1,267 minute on the pitch this season.

Howell secured All-SAC honors for the first time in her career following a season that included five goals and eight assists (18 points). The product of Little Rock struck for three game-winners, including the lone goal in John Brown's 1-0 victory at Science and Arts (Oct. 5), the Drovers lone loss in the SAC regular season. She passed out a pair of assists in two lopsided Golden Eagle wins and attempted 42 shots on the season, 17 on goal.

A three-time All-SAC selection, Nealon only saw action in 15 contests, making 12 starts, but was still one of eight Golden Eagles to finish with double-digit point totals. Tallying six goals and four assists (16 points), the native of Windsor, Calif., continued her streak of scoring big goals in big games by accounting for four game-winners, most of any player on the squad. The junior tallied game winners over Columbia (Sept. 7), Tabor (Sept. 21), Georgia Gwinnett (Sept. 28) and Central Christian (Oct. 1).

Schoenberg came in and made an immediate impact in her first collegiate season by starting 15 of 19 contests on the back line as a greenhorn. Originally from Gilbert, Ariz., she tallied the primary assists on John Brown's insurance goal in a 2-0 season-opening win over LSU Shreveport (Aug. 23). On the back line, she added stability on the left side by limiting opponents to just 12 goals in the 19 matches Schoenberg appeared in.