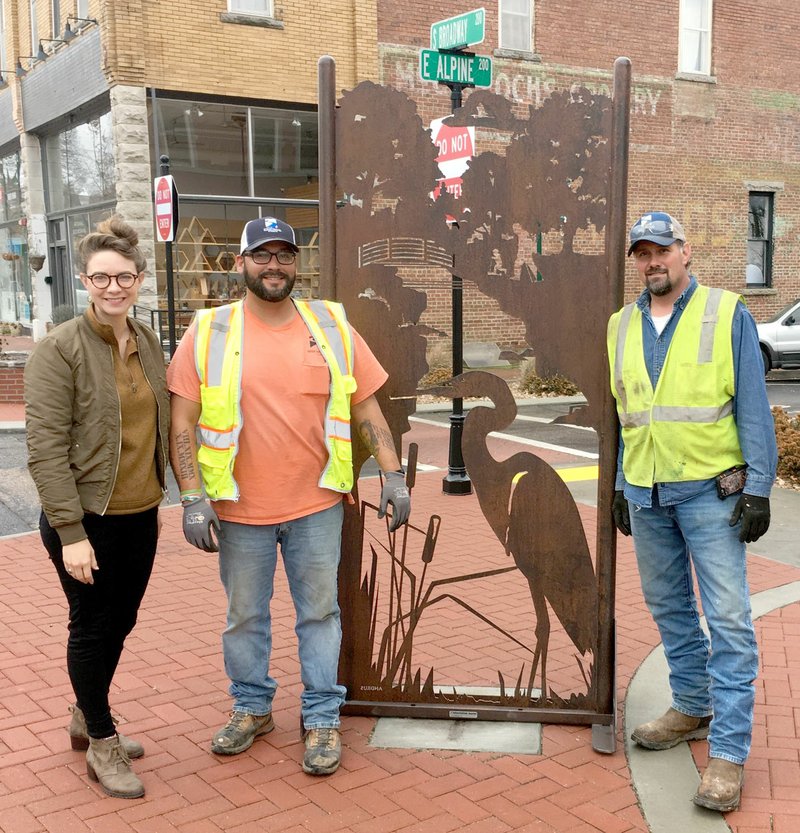 The sculptures were designed by David Andrus, a JBU professor of visual arts, and built by Alternative Design, according to Kelsey Howard, director of Main Street Siloam Springs. They were installed by city employees.

"We are so grateful for the support and partnership of the city of Siloam Springs, John Brown University and Alternative Design," the December edition of the Main Street Siloam Springs newsletter stated.

The idea for the sculptures started in 2016, when City Administrator Phillip Patterson emailed Howard about the possibility of placing metal sculptures in downtown Siloam Springs, according to Howard. The idea came from Patterson's time as the assistant city manager and community development director for Lafayette, Colo., Patterson said.

According to Howard and Patterson, one of the programs that the city of Lafayette implemented was Art on the Street. The program has artists submit their work to a public art committee that decides which designs are placed on the street for the community to enjoy, according to the city of Lafayette's website. One of the most important criteria is that the art selected represent a variety of media and styles, the website states.

The idea was still in the planning stages in January of 2017 when Andrus emailed Howard to tell her he had the opportunity to apply for the Charles Peer Endowed Chair, according to Howard.

Andrus ended up receiving the Endowed Chair, which allows a professor to be released from a certain number of classes, yet not lose their salary, so the professor can work on a project for the betterment of the community. Andrus submitted 10 digital designs to Howard for the sculptures. Of the 10 designs, four were chosen, he said.

Howard had already met with Alternative Design, the company that would build the sculptures. At first she had thought about putting in a xylophone or ping pong table so the design would have a lot of engagement.

"They showed some things that they were really proud of and one of them was a sign that they had done taking a photo and turning it into this beautiful metal silhouette and it made me think of Dave's artwork, which he does digitally, and they're beautiful and I thought 'what if we translated that into metal,'" Howard said.

Howard started a conversation with Andrus in early 2017 about the possibility of turning his digital drawings into metal and he was excited about the idea. The difficult part was finding a balance between maintaining the integrity of Andrus' designs and creating a sculpture that was safe and beautiful, she said. Howard credits Alternative Design with helping to find that balance.

Howard is also grateful to the city for the help it contributed in figuring out the logistics of mounting the sculptures. The challenge, according to Howard, was how to put four seven-foot sculptures at the intersections without impeding the line of sight of drivers and pedestrians. She said the sculptures were going to be placed on special mounting pads that were built into the sidewalk extensions commonly referred to as bump outs.

"We have been planning for those four sites to be sculpture sites for a long time, since the beginning of the design of that infrastructure," Howard said.

The sculptures will be up until Autumn of 2020 and then they will be installed somewhere else in the downtown area, she said.

"These sculptures aren't permanent," Howard said. "The site is designed in such a way that it can accommodate a lot of sculptures so we are going to rotate new sculptures every year in those four sites."

The sculptures for next fall will come from the University of Arkansas School of Art, Howard said. The university and Main Street Siloam have in partnership, created a seminar series for the art students, she said. The seminars started in August and focused on how to create design proposals for sculptures they hope to place in Downtown Siloam Springs, Howard said.

"It's taking what they've learned in the classroom and allowed them to have an opportunity to learn about a real world example of a municipal and nonprofit commissioned art piece and how that works in real life," Howard said.

According to Howard the designs were due on Dec. 1. The four students whose projects will be accepted will receive stipends that will allow them to fund their sculptures.