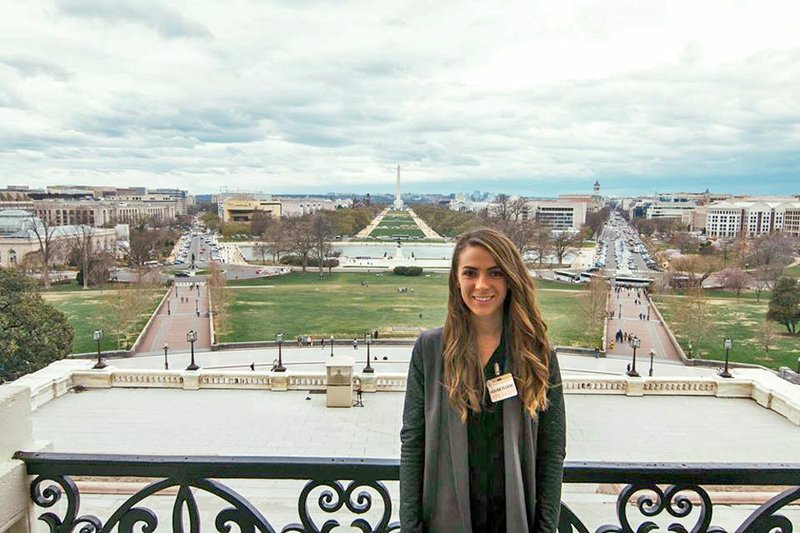 Photo submitted Samantha Tafoya, of Siloam Springs, stood on Congressman Steve Womack's (R-Ark.) balcony in the U.S. Capitol Building in April 2018. At the time, she was visiting Washington, D.C., with the College of Engineering at the University of Arkansas. The group of students were finalists for George Washington University's Planet Forward video contest. Currently, Tafoya is living and working in Washington, D.C., for Search for Common Ground, an international non governmental organization. She recently received the 2019 Thomas R. Pickering Foreign Affairs Fellowship, funded by the U.S. Department of State. The fellowship will allow Tafoya to earn her graduate degree and pursue a career in U.S. Foreign Service.

Samantha Tafoya grew up in Siloam Springs dreaming of making an international impact and healing conflicts, but she never imagined how far that dream would take her.

In November, Tafoya was awarded the 2019 Thomas R. Pickering Foreign Affairs Fellowship, which will allow her to attend graduate school and give her the opportunity to begin a career in the U.S. Department of State, according to press release from the fellowship.

The Thomas R. Pickering Foreign Affairs Program is funded by the U.S. Department of State and administered by Howard University. The fellowship is awarded as part of a nationwide highly competitive contest, the release states.

Once Tafoya completes graduate school, she will have the opportunity to work as a foreign service officer under an ambassador at a U.S. Embassy. Her job will include finding contacts, networking, talking to officials and investigating, then writing reports to the Department of State and Congress, she said.

"We are truly thrilled and excited that Samantha will be joining the Pickering Fellowship Program," said program director Lily Lopez-Mcgee ph.D. "She demonstrated outstanding academic achievement, leadership and commitment to service during her time at the University of Arkansas. These experiences bode well for her success through graduate school and in the Foreign Service as well. I look forward to seeing all that she will accomplish in her career."

Tafoya said her interest in foreign relations and conflict resolution began in Kelly Meeker's language arts class at Siloam Springs High School. Meeker, who now works as an instructional facilitator, encouraged her students to read books and discuss events that took a hard look at race and conflicts throughout the world, Tafoya said.

But when Tafoya graduated from high school in 2010, she didn't have the money to go on to college, so she entered the workforce. Then a few years ago, she got a job as an accounting technician in the University of Arkansas' recreation department. The full-time job came with tuition discounts, allowing Tafoya to finally go back to school.

"It's still amazing to me, I just went back amazed and grateful to get an education -- everything that it's turned into, its a miracle," she said.

Tafoya also attended New Life Church in Siloam Springs and went on mission trips, which gave her a heart for serving others. However, she realized that to have the most impact, she would need to work for the Department of State because the department's resources have the furthest reach and the highest capacity for healing conflicts and making a difference.

She graduated in May from the university's honor's college with three majors -- journalism, political science and African studies -- and one minor -- anthropology. She earned the degree in just three years, all while working full time. She explained that she came in early and worked late so that she could take classes during her lunch breaks or in the evenings. She also took classes during every summer session.

Since Tafoya is passionate about conflict resolution, she had spent a lot of time studying how apartheid was resolved in South Africa and is a big fan of Nelson Mandela. However, she was surprised to see the inequality that still exists, with shacks and slums right across the street from skyscrapers. She was even able to contact Miller, who agreed to share drone footage for her documentary.

Tafoya said she was the first student from the honors college to research her thesis in South Africa and the first person to present her thesis as a documentary film. She also found time to work at several local nongovernmental organizations and write for the Sunday Times in Cape Town.

Currently, Tafoya is living and working in Washington, D.C., for Search for Common Ground, in the East African division. The international non governmental organization works to resolve conflicts and build peace all over the world. Her work consists of research, proposal development, program reporting and evaluation with a focus on human rights, leadership capacity building for women and countering violent extremism in communities affected by Boko Haram and Al-Shabaab, the press release states.

Living in Washington, D.C., is surreal, Tafoya said. In some ways, the neighborhood she works in feels small because she sees the same people everyday, but then she can walk down the street and see landmarks, such as the White House, or see the presidential motorcade drive by, she said. She is also able to witness national events firsthand. For example, in December, she was able to get up early, before the crowds gathered, and visit President George H.W. Bush as he lay in state in the Capitol Rotunda.

"I feel like I have to pinch myself daily," she said. "I feel like the magnitude of it is just now setting in."