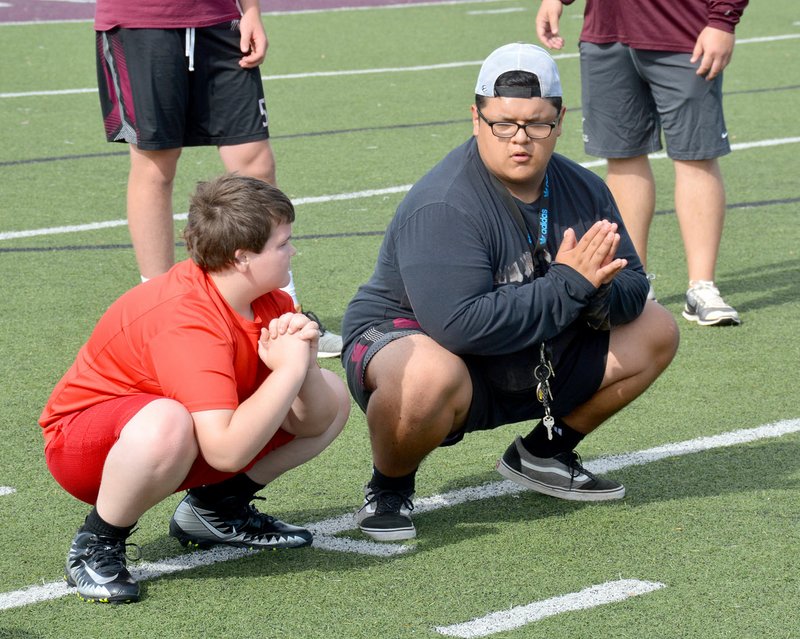 The Siloam Springs football program and the Boys & Girls Club of Western Benton County are teaming up to take Panther football to a higher level.

Since the arrival of head coach Brandon Craig in the spring of 2018, the two organizations have been in talks about what needs to happen to get the youth football programs up to speed so that when those players reach the middle school level and can begin playing school football in seventh grade, the transition is almost seamless.

Now with Craig having just completed his first season as head coach, the Panthers and Boys & Girls Club appear to be heading in the same direction.

"I think the idea is we're trying to tie our programs together as far as youth and high school to create one big Panther family, where kids who are going to come in to our program, starting in kindergarten they're seeing what they're going to use in seventh through 12th grade," said Clinton Thurman, athletics director of the Boys & Girls Club of Western Benton County and a former Panther football player himself. "They step right into the system and go."

Craig and his staff of coaches met with the coaches of the Boys & Girls Club to go over offensive and defensive philosophies.

A youth football committee also was formed and it put together a plan moving forward.

Shortly after the 2018 season ended, after a 5-6 season for the Panthers which included their first playoff appearance since 2014, the coaches from the high school and the Boys & Girls Club met and the whole youth program was re-analyzed from top to bottom, Thurman said.

"This last season has been fun to see that excitement coming back," Thurman said. "There was a whole different energy around the program, something I haven't seen since my freshman year when (Billy) Dawson turned us around (in 2004)."

As a former Panther, Thurman is invested in the football program at Siloam Springs High School.

"My biggest reason to take this job (as athletics director), I was a Panther," he said. "I've been the youth football kid that got to workout with the high school kids and play on Friday night. I've been the kid to turn around and work with the youth kids. I would love nothing more than to see our team get back to that point. I think the benefit of what football and sports offers to kids as far as a learning tool and how to react to adversity and daily life is a huge benefit to football."

Thurman remembers fondly playing for coach Clint Ashcraft during the 2005, 2006 and 2007 seasons as a linebacker and deep snapper. The Panthers advanced to the postseason in all three of those years.

"I think my group was the first to beat Alma in 20 years," he said. "We were the first to go to second round of playoffs in 10 to 20 years. So that's my memory of Panther football is winning games, filling up stadiums. I remember filling up visitor's sides of stadiums."

"We wanted to get our coaches coached up to teach the fundamentals and philosophies they're using at high school," Clinton Thurman said, who added that the club's COO Chris Shimer and unit director Stephen Johnston also have been heavily involved.

A new feature is the Panther Academy, which is available to youth football players during select mornings at Siloam Springs High School. Kids can get coaching from high school football coaches and players for one hour on Tuesdays and Thursdays in June and July, minus the Arkansas Activities Association dead period, which runs June 23-July 8.

"I think it's just Coach Craig's willingness to be invested in what we're doing is a big thing," Thurman said. "He understands that our guys are eventually going to be his guys. The more he invests in them the more benefit he's going to see in his program. This is the safest time to play football and put football in a positive light in the community. Football has taken a hit as far as concussion and injury scares. The training and equipment are there now and it's much safer than even 10 years ago when I played."

The Boys & Girls Club of Western Benton County offers flag football to boys and girls in grades K-6, and these teams play against other teams from Gravette, Decatur, Gentry and Siloam Springs.

Practices begin this summer and the season runs in September and October with the playoffs and championship weekend being wrapped up in the first weekend in November.

Also, the annual Siloam Springs Youth Football 7 on 7 Tournament, which has been directed by Branson Hall each year, will be at Panther Stadium on July 13 and feature teams from all around Northwest Arkansas.

Craig thanked the volunteer coaches for buying into his vision for Panther football.

"I appreciate their cooperation," Craig said. "I think the goals we set, we're on the right track to accomplish them."

For more information on youth football at the Boys & Girls Club, contact Thurman at clint@bgcwbc.org.