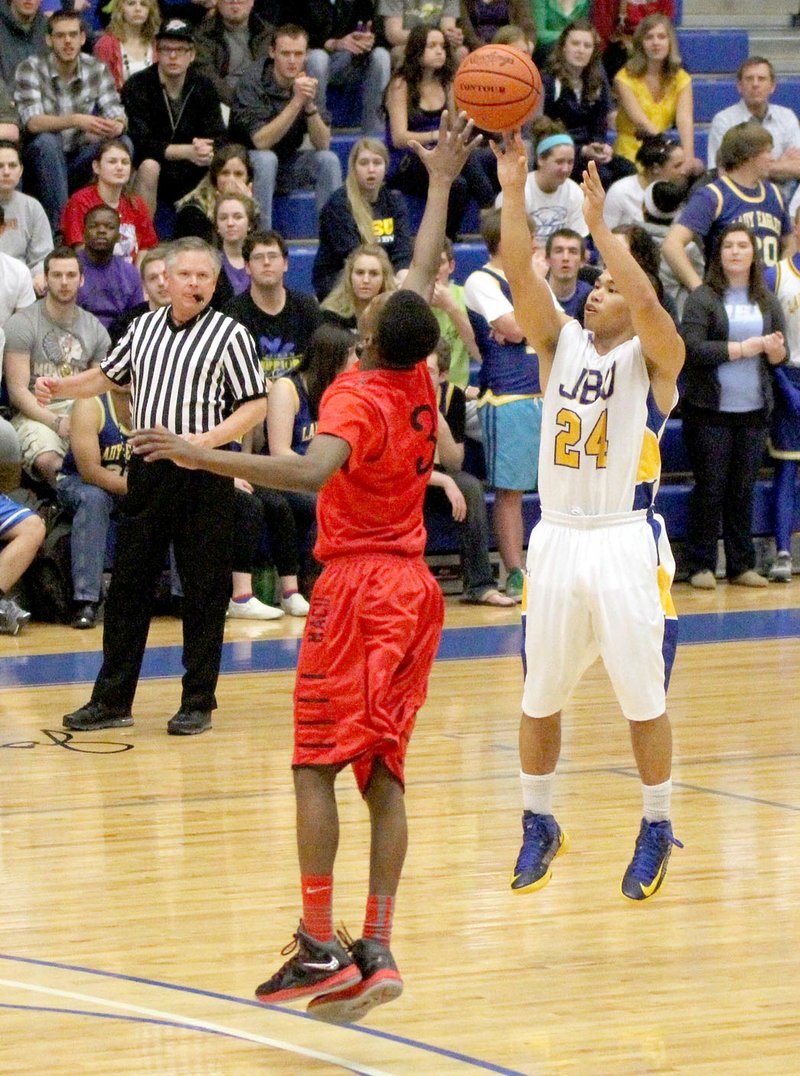 Abel Galliguez isn't sure what came first -- his ability to walk or shoot.

"Since I was a toddler; ever since I can remember, my family always had the NBA on TV," Galliguez, 28, said. "As a young child, I wanted to grow up and play like the NBA players. I started with 'Little Tikes' goals, now I'm [shooting] on world-class arena goals."

Galliguez, a NAIA All-American Honorable Mention during his senior year at John Brown University (2013) and career 1,400-point-scorer, is in his fifth season of professional basketball in the Philippines.

Entering high school in Sugar Land, Texas, somewhere near five-foot flat, the hoops seemed to grow higher, faster than Galliguez did. Now, standing around 5-8, he remembers advice his dad gave to him and his twin brother -- JBU teammate -- Thomas about their stature.

"You're really short; you guys should try another sport like a martial arts, gymnastics, or soccer where height didn't matter as much," his dad said.

"I didn't even give it a second thought to quit because of my size," Galliguez reflected. "Being the shortest player wherever I go, I used it as a chip on my shoulder to fuel my fire and competitive spirit, to prove and earn the respect on the court with the bigger boys. It's the size of the heart and your willingness to compete that matters."

After five Philippine Basketball Association Finals appearances with the Alaska Aces -- a team owned by a national milk corporation -- and a lifetime of being the "mouse-in-the-house" on the court, Galliguez has navigated size mismatches down to a science.

"Some teams have the luxury to start a 6-5 or 6-3 point guard," he said. "In that situation they could potentially isolate me in the post. The way I position myself before my player has the ball is key to make sure I discourage him from catching it close to the basket where the height disparity will prevail. Also having a low center of gravity allows me to push taller guards out of their scoring positions."

"My coach has always told me that I have to be the best shooter on the team and the coach on the floor," Galliguez continued. "Other guys who are taller can focus on their strengths but I've got to be able to do it all and also know where to direct all my teammates."

The 12-team league operates entirely out of metro Manila, perhaps the most basketball-crazed slice of the globe.

"Basketball, by a long shot, is the number one sport of the Philippines," he said. "Sometimes monsoons hit and neighborhoods flood. I remember one storm that flooded the streets and I still saw a group of teenage boys playing outside on a goal made of wood and a dangling ring with water up to their waists and chests. That is definitely a true love for the game."

That love for the sport can create an intense atmosphere at PBA games.

"My favorite moments are during the finals," Galliguez said. "When every game of the series is a packed house and the arena is filled with cheering so loud that you can't hear your teammates or coaches during the game."

Galliguez has also played in near empty arenas.

"I've seen and experienced a wide range of atmospheres from sold out arenas all the way to no sold tickets and only family members of the players in attendance," he said.

For Galliguez, a Filipino American, his half-decade in the PBA has been about more than just basketball.

"During my first two years, I tried to immerse myself in the culture," he said. "I had to learn how to commute and use the public transportation. I tried to learn Tagalog [the National language of Philippines]. There are still some differences I am trying to accept and get used to. I enjoy playing basketball and working out to make a living, but living in the Philippines there is the heat, the traffic, and the overcrowded city. I can't even enjoy a couple minutes of walking outside in Manila because I can smell the smoke exhaust from public utility vehicles and the heat melts me into a complete sweat."

The PBA runs an unusually long near 10-month season, that affords him at most a month off and often as little as just one week to recover from the previous season. Still, the grind hasn't eroded his passion.

"I wanted to play in PBA because it was a realistic goal and another opportunity to earn money other than working in an office," Galliguez said. "I think it's like finding your wife. You'll know she's the one when you know. In the same way, I'll know its time to hang up the jersey when I know. But, I hope to get in another five to seven more years and maybe a championship some day."

Looking back on his time at John Brown University, Galliguez was quick to point out lessons that have served him well journeying in a new country.

"The basketball team and coach [Clark Sheehy] held me to a high standard both on and off the court," he remembered. "There were certain life skills and principles I gained that help me in my life still today both as a basketball player and in my personal life. We had a team principle that we would get better everyday. I still live by that motto. I apply this growth mentality to everything that I do."