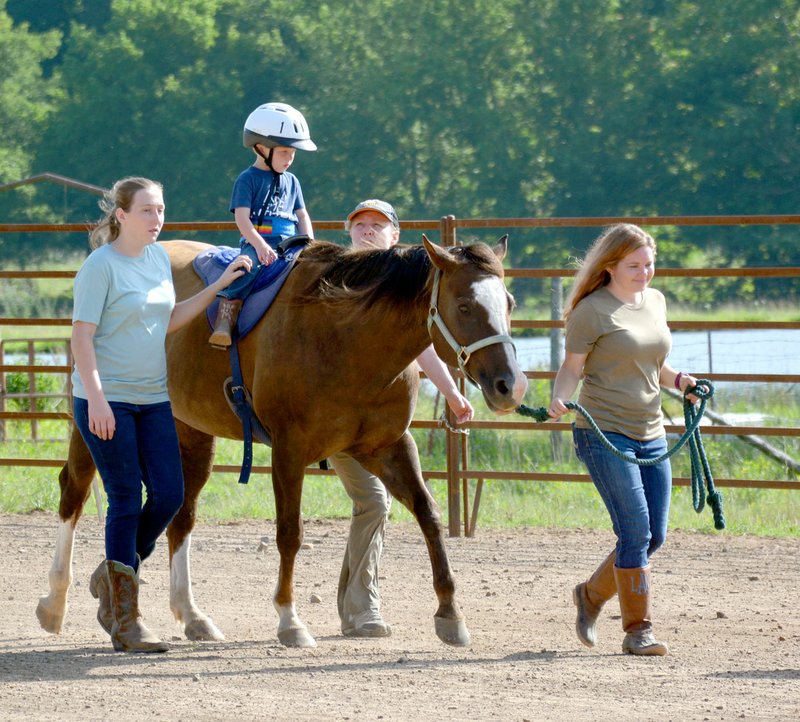 Healing by Horseback is taking a novel approach to speech, physical and occupational therapy by using horses as a therapeutic tool.

The Lincoln-based organization is the nonprofit arm of Siloam Springs Pediatric Therapy, according to Alyssa Pitts, a speech language pathologist who founded both organizations.

Pitts has a background with horses -- she grew up on a farm and her family was involved with rodeoing. While studying to become a speech language pathologist, she had a class that briefly mentioned using animals for therapy. The idea took hold in her mind and she was attracted to the novel approach, she said.

Pitts established the clinic and nonprofit in the spring of 2017 and the first season of hippotherapy took place in the summer of 2018.

Siloam Springs Pediatric Therapy treats patients in the Siloam Springs clinic year-round. In June through October, patients who are good candidates for hippotherapy see their therapists once at the clinic and once at the horse facility located off South Arkansas Highway 59 in Lincoln each week, where they do therapy both on and off the horse.

Hippotherapy is a tool or strategy used as just a part of the standard practice of speech therapy, physical therapy or occupational therapy, according to the American Hippotherapy Association. The term originates from the Greek word hippo, which means horse. Rather than being a separate service, therapists incorporate equine movement into their plan of care for a patient, the AHA website states.

Hippotherapy differs from therapeutic riding or adaptive riding because each patient has a plan of care with specific goals and the therapy is directly administered by a licensed therapist, Pitts said.

When Siloam Springs Pediatric Therapy gets a new patient, the patient is evaluated based on standardized assessments and the therapist's clinical judgment, Pitt said. Then a plan of care is created to address the child's deficits and help them get their function back, she said.

The patients work toward the same goals in the clinic setting and in the barn, just using different strategies, Pitts said.

"Based on that plan of care we come out to the barn and do activities that are directly correlated with the goals from that plan of care, so hippotherapy is just another treatment tool that we use outside of the clinic setting," she said.

Horses are useful in therapy for a number of reasons, Pitts said. Therapists do activities both on and off the horse to illicit the movements in their patients they are trying to achieve. While therapy can be hard work and is sometimes difficult, horses are a powerful motivator and can turn the work into fun.

Hippotherapy was started because a horse's gait pattern is the closest to a human gait so it simulates walking for patients and for some it may be the first time their body uses the muscles and gets the feel of true walking, Pitts said. Riding can build core and head strength and gently stretch seldom-used muscles.

Additionally, the consistent, rhythmical and predictable movement that makes horse riding helpful for physical therapy is also beneficial for speech therapy and can even help children who stutter, she said.

Horses can also help children with sensory issues, Pitts said. For example, when one patient started at Healing by Horseback, she gagged every time she touched a horse. Now she can lay on the horse's back and hug the animal.

Off the horse, patients may practice skills such as balance by standing on a dynamic balance surface while stretching to brush the horse, Pitts said. One patient is working on holding his head up and tracking movement with his eyes. He is not cleared to ride by his doctor, but the horse walking around him offers him the motivation he needs to try lifting his head and following the horse with his eyes. It is very difficult to get the same behaviors from the patient in the clinic without using horses as a tool, she said.

Parent Kerri Horton of Westville, Okla., said her 4-year-old son Jackson has been receiving occupational and speech therapy from Siloam Springs Pediatric Therapy for about three months and he just finished his third session at Healing by Horseback last week.

During that time, Jackson went from being completely nonverbal to expressing sounds, making all the sounds of the letters and saying 15 to 20 words, she said.

When Jackson started seeing his therapists at Healing by Horseback, his mother saw a rapid improvement and now he makes horse neighing sounds and carries a small toy horse with him wherever he goes, she said. Jackson is also very excited to go to hippotherapy each week, she said.

"This is amazing and they are awesome therapists," Kerri Horton said. "They really have done so much with him. I wouldn't have expected it so soon. I figured it would have been a while before he picked it up but he really took off."

"That's why we do what we do," Pitts said. "It's dirty, long, hot days but when you get results like that, that are true functional results, I'm like 'ah, I'll stay out here for days on end.'"

It's not uncommon to see abrupt improvement in patients when they start hippotherapy and Pitts believes there has to be a correlation, she said.

"You can do the same things in your clinic for possibly months, but then you start this and you have improved posture, improved tone, improved balance, its just constant repetitive drilling of the goal you're working for," she said.

Working together for the kids

Currently, Healing by Horseback hosts about 30 sessions each week and has around 15 volunteers, she said.

Last year, the nonprofit received an Ozark Cares Grant to triple the size of their arena and add a covered portion, which provides shade for patients. All the patients are easily fatigued and don't tolerate heat well, so the shade is very important, Pitts said. Harps in Lincoln also donated bottled water to help keep patients cool and well hydrated.

The barn at Healing by Horseback is specially designed with indoor, air-conditioned therapy rooms, a waiting area where parents and patients can observe the horses without coming in contact with them and a specialized mounting block.

All the therapists who work for Siloam Springs Pediatric Therapy and volunteer at Healing by Horseback have received special training from the AHA in addition to their professional licensing. Most of the therapists don't have a background with horses, which isn't necessary for hippotherapy, Pitts said.

Volunteer horse handlers take charge of the horse while the therapists focus on the kids and the therapy, she said. Meanwhile, volunteer side walkers also walk beside each patient while they are riding to keep them safe.

Horse trainer and riding instructor Lori Perdue of Gentry serves as the head horse handler in charge of organizing the horses in the program.

Pitts owns two of the horses, another handler brings two and Perdue brings the rest, Pitts said. All of the horses have been carefully vetted and candidates for the program were brought to a trail run where they were exposed to stimulus they might be exposed to during therapy sessions such as hula hoops, popping balloons, bubbles, screaming kids, accidental hair pulling and riders who squeeze really tight with their legs to test their reactions, she said.

Profiles on the horses were also done to see how they move, Perdue said. They all travel a little differently, taking longer or shorter strides, moving quickly or slowly, or moving side to side. That way their movement can be matched with patient's needs, she said.

It takes the therapists, horse handlers and side walkers, each specializing in their own area, to make hippotherapy possible, Pitts said.

"Everyone here is so great at what we do if we didn't do it collectively together, none of this would happen," she said. "That's the key to this thing -- we all work so well together, because it's for the kids. You have a main goal in mind. We don't mind to get hot and sweaty and stinky if its for this purpose."