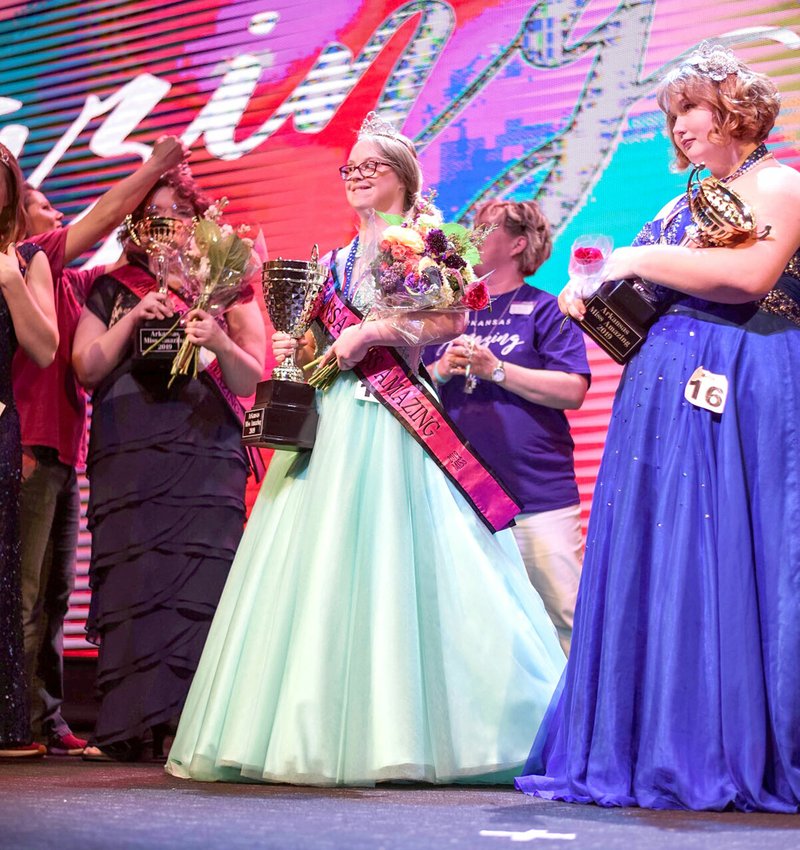 A Squared Photography/Special to the Herald-Leader Lezlie Ritz of Gentry was crowned Miss Amazing Arkansas in May. She is heading to the National Miss Amazing pageant in Chicago on Aug. 2-4.

The 25-year-old, who has Down syndrome , lives in Gentry and graduated from Siloam Springs High School in 2012. She decided to compete in the Miss Amazing pageant earlier this year to become more engaged with the community and enrich her life, according to her mom Chelli Ritz.

The National Miss Amazing competition will take place on Aug. 2-4 and will be streamed live on the Miss Amazing Inc., Facebook page for those who wish to watch from home.

Miss Amazing is a nonprofit dedicated to providing personal development opportunities that build self-esteem in girls and women with disabilities, according to Jordan Somer, national executive director. Since expanding nationwide in 2011, Miss Amazing programs are now in 32 states from coast to coast and have touched the lives of more than 1,700 girls and women with disabilities, she said.

The Miss Amazing pageant experience teaches girls and women with disabilities to advocate for themselves and that they do have the ability to pursue their goals, Chelli said.

Miss Amazing offers women from different walks of life a chance to learn from each other and develop a valuable support system, according to the organization. The pageants provide opportunities for girls and women with disabilities to test their boundaries and take on new challenges. They provide a public platform for girls and women with disabilities to define themselves on their own terms and dispel stereotypes.

Those who participate in Miss Amazing learn self-advocacy skills to help them speak up and out, according to the organization. Those skills include self-determination -- or making choices, goal setting and verbal and nonverbal communication. They also reflect on strengths, interests and ambitions.

The Arkansas Miss Amazing Arkansas pageant took place in Bentonville on May 4. The pageant is broken into six age divisions encompassing ages 10 through 35, including preteen, junior teen, teen, junior miss, miss and senior miss. Lezlie falls into the miss age category for women age 24 through 27.

During the event, participants interviewed in front of a panel of judges, performed a talent and introduced themselves on stage. For her talent, Lezlie performed a dance in a costume she chose, which was also her favorite part of the pageant. She also enjoyed making new friends at the event.

All of the participants received a crown at the end of the competition, but a first runner up and queen were chosen from each age category.

Lezlie was all smiles as she received her flowers and crown, according to her dad Tom Ritz.

She is one of five queens who will be representing Arkansas in the national pageant -- the state does not have any senior miss competitors. Overall, a total of 150 girls and women are expected to compete in Chicago.

Lezlie said her goal for the national pageant is to learn to be more assertive. She is looking forward to making new friends in Chicago and spending time with her new friends from Arkansas.

Instead of a talent portion of the competition, the national pageant features a passion project, Chelli said. Lezlie plans to perform her dance for the passion project because dancing is her passion, she said.

In addition to dance, Lezlie enjoys playing baseball and basketball, watching sports with her dad, and helping her grandparents who live in Siloam Springs. She also attends Pathfinders, a Rogers-based nonprofit that provides services for the disabled, and works three days a week at Big Whiskey's American Restaurant in Bentonville.

Chelli said she is especially thankful for the sponsorship of Cornerstone Bank and the Siloam Springs Civitan Club, as well as the support of many family members and friends.

More information and a link to the live stream is available on the organization's website, missamazing2019.org.