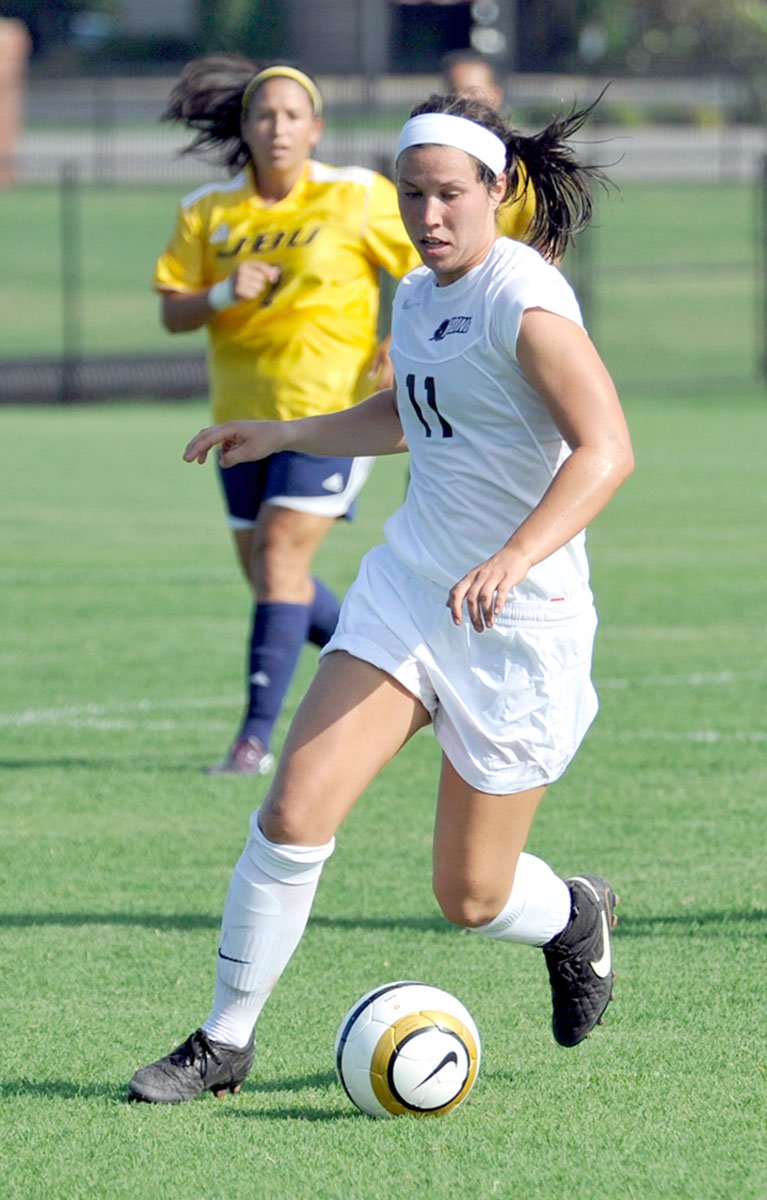 Taylor Fisher joins the Golden Eagles after a one-year stint as a volunteer assistant at Trevecca Nazarene (Tenn.), helping the Trojans to a five-win improvement over its 2017 campaign.

"We are so excited to welcome Jenna to our program and the JBU family," Paulsen said. "It was clear through our first interactions that Jenna has a deep passion for Jesus, discipleship and excellence in soccer. These passions are foundational to this program and team. Not only does Jenna bring a similar set of core values to our program, but she also comes to us with a wide variety of experiences that will be invaluable to this program. Some of those include a successful soccer career at Harding University, a masters' degree in nutrition and experience coaching at the high school and collegiate level.

"Jenna is well-equipped to contribute to this program on and off the field. We are thankful to have her as a part of our program."

At the Nazarene-affiliated institution in Nashville, Tenn., Taylor Fisher assisted in day-to-day tactical decisions and planning alongside mentoring and discipling players under head coach Kelsey Fenix. The Trojans finished 13-4-2 and made an appearance in the GMAC tournament semifinals.

"While I'm sad to see Jenna go, I am truly excited about this next opportunity for her," Fenix said. "Jenna has been an incredible asset to our staff and program here at Trevecca Nazarene. She is confident, intense and able to hold the players to a high standard. At the same time, she is kind and welcoming, helping to create a safe place for the players to be themselves. I have great respect for Coach Paulsen and the program she has built at JBU, and I have no doubt that Jenna will fit right into the staff and culture."

In the year prior to her stint with the Trojans, Taylor Fisher taught Exercise Science and Nutrition courses as an adjunct professor at Columbia State Community College in Nashville while serving as a health and wellness coach for a private organization, Maxim Healthcare.

During the 2017-18 academic year, Taylor Fisher took the reigns of the Grace Christian Academy girls' soccer program in Leipers Fork, Tenn. There, along with teaching health and wellness, the first-year head coach led the Lions to the district semifinals and established a culture of accountability, hard work and integrity.

While completing her Master of Exercise and Nutrition Science degree at Lipscomb (Tenn.) from 2015-17, Taylor Fisher coached the Tennessee Soccer Club U-11 Girl's Academy squad.

As an athlete, the two-year captain competed in 58 contests for Harding, making 55 starts over four seasons. Taylor Fisher had a breakout junior campaign that saw the Bartlesville, Okla., native tally six goals and finish the season with 15 points. She followed up with a 10-point senior campaign to graduate with 31 total points (12 goals, seven assists) in 2013.

In the spring of 2014, Taylor Fisher graduated with a Bachelor of Nutrition and Dietetics.

"Jenna is one of the hardest working, intelligent and talented student-athletes that has come through our program at Harding," said Harding coach Greg Harris. "The only way she knows how to work and play is to go one hundred percent all of the time."

The Golden Eagles pieced together a historic run in 2018, making its deepest run ever in the NAIA National Championships to the Round of 16 and finished the year with a 16-5-1 (.750) overall record and made a sixth consecutive appearance in the Sooner Athletic tournament finals under the direction of Paulsen. John Brown will open the 2019 season on Aug. 23 against Louisiana State-Shreveport at Alumni Field.