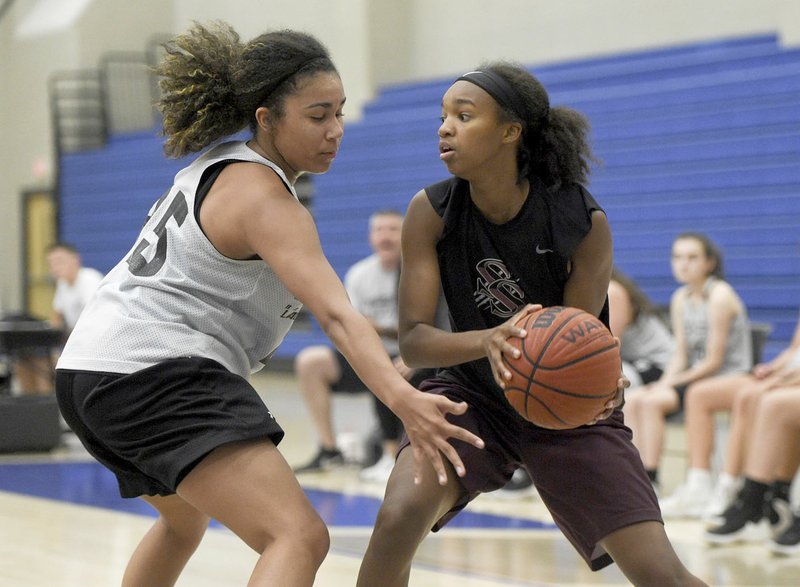 The Lady Panthers' varsity and junior varsity teams each went 2-1 on the day.

"Both teams wound up going two and one and played really hard and really well," said head coach Tim Rippy, whose team went 9-18 overall in 2018-19 and finished fifth in the 5A-West Conference with a 6-8 record in league play.

The varsity team opened up the day with a game against Mountain Home and got off to a slow start.

The Lady Panthers got behind by about 15 points, according to Rippy, but they hit a 3-pointer with around six seconds left to cut the lead to three points.

After the Lady Bombers missed a free throw, the Lady Panthers had a shot to tie the game but a 3-point shot from around half court missed.

"We showed a lot of resilience in that game because we had a slow start and (playing better) gave us confidence the rest of the day," said Rippy, who pointed out that Mountain Home was a Class 5A state semifinalist this past year.

Siloam Springs then beat Prairie Grove by double digits and wrapped up its play against Springdale in the final game.

"We were up 15 at halftime and finished off the game and won by 10," Rippy said. "We wanted to do better than that and run time off the clock and extend our lead."

Rippy said rising senior Jael Harried, who is the team's leading returning scorer at 9.8 points per game, is taking a nice leadership role with the team so far in the spring and summer.

"She seems motivated," Rippy said. "She's led us in scoring in a lot of games."

"She shot the eyes out of it in that game," he said. "She can really go on streaks like that for us.

Rippy said senior Alexsis Fortner stepped up and played extremely hard and hit a couple of 3-pointers in every game.

"We need (Efurd) to continue to develop," Rippy said. "I don't think I took her out so we can get her as many minutes as we can at the point position."

In junior varsity action, the Lady Panthers picked up wins against Rogers and Springdale but were defeated by Conway.

"Rogers has a solid JV team so that was a nice win," Rippy said. "Conway's JV was head and shoulders better than we were. We struggled to keep them off the glass. Our kids never quit and they competed and fought to the end. Springdale at end of the day, we were able to get a win to finish the day. They gutted out a tough win there."

"Hernandez did well at point guard, while Reina Tiefel is a scorer," Rippy said. "Hannah Riley is a very talented kid that in spurts can be as good as anybody we have. There was a three-minute burst against Rogers where she had 12 points."

The Lady Panthers are scheduled to return to action this week at Branson (Mo.) Team Camp.

"What we like about going up there, you tend to see a lot of different styles of play," he said. "It challenges you in different ways. We saw all man-to-man (defenses) at Rogers. We might see six to seven different defenses in Missouri."

Rippy added that the Lady Panthers will be missing some varsity players in Branson, which will give an opportunity for others to step up this week.

After team camp in Branson, the Lady Panthers will have a quick turnaround before going to team camp at the University of Arkansas on Monday in their final competitive camp before the Arkansas Activities Association dead period at the end of the month.