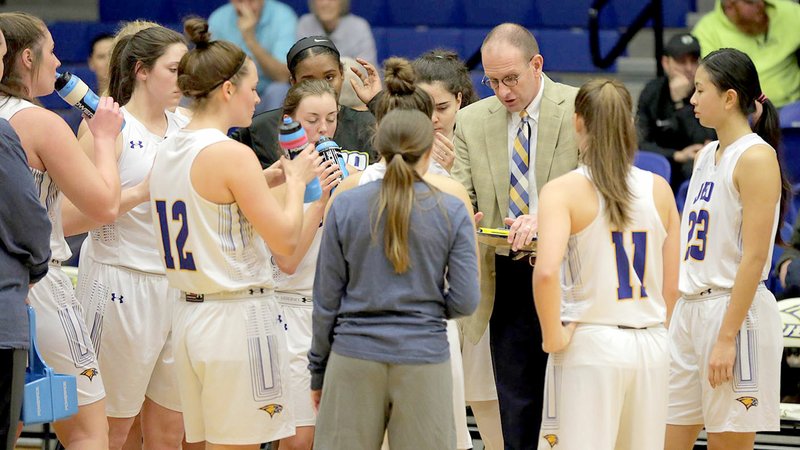 "I'm very excited about this class," Soderquist noted. "I think all four of them really fit into our system and will do very well for us over the next four years at JBU."

The Golden Eagles open the 2019 campaign on Nov. 2 when John Brown hosts Crowley's Ridge (Ark.) inside Bill George Arena. The matchup will tipoff at 5 p.m. JBU will then hit the road for its next five outings, including making appearances at the Southwestern Assemblies of God Classic in Waxahachie, Texas, and the College of the Ozarks Classic in Point Lookout, Mo.

Jessica Goldman signs on with the Golden Eagles after a three-year career under head coach Emilianne Slamons at Lincoln High School. The 5-foot-10 guard helped the Wolves to an Arkansas Activities Association quarterfinal finish as a senior by averaging 16 points and six rebounds per game. Also in her final season, Goldman netted 30 points and added six rebounds and four assists in Lincoln's overtime upset over defending champion Central Arkansas Christian in the first round of the 3A tournament, just one game after she scored her 1,000th career point. This helped propel the Evansville (Ark.) native to All-State and All-State Tournament accolades after securing All-Conference nods in back-to-back seasons. Goldman, the squad's two-time player of the year, also suited up for the Lincoln volleyball team for three seasons under Michelle Lumsargis.

Soderquist on Goldman: "Jessica comes from a basketball-rich family. She has a high basketball IQ and will fit well in our offense. She is another player that could play multiple positions."

Pryor High School standout Kenzie Silkey joins the Golden Eagles after a four-year career under head coaches Gary Kennemer and Donnie Martin. Over her four seasons, the 5-foot-5 guard averaged 3.4 points, 2.0 rebounds and 1.6 assists per game and helped the Tigers to a semifinals appearance in the OSSAA 5A state tournament in her senior season. Named the team's defensive player of the year in 2019, the Pryor, Okla., native was also an Academic All-State selection as a senior. With Silkey rostered, the Tigers clinched a trio of regional titles and added back-to-back area championships.

Soderquist on Silkey: "Kenzie will add some depth to our guard position. She can handle the ball and shoot really well, which will fit into what we do."

Fresh off leading Wyandotte High School to a conference title, Stephens suits up in the blue and gold after a four-year career under head coach Bobby Walters. While a Bear, the 5-foot-11 forward eclipsed the 2,000-point mark in her senior season when she averaged over 25 points per game. The Wyandotte, Okla., native posted a career-high 44-point outburst over Colcord in 2019 en route to an All-State selection. The three-sport athlete was also named the Most Valuable Player of the Lucky Seven Conference in back-to-back seasons.

Soderquist on Stephens: "Tarrah is a great scorer, and she can score from about anywhere on the floor. She plays hard and has the ability to play multiple positions in our offense."

Lisa Vanoverberghe will look to fill the void of outgoing seniors Baily Cameron and Preslea Lawson as the 5-foot-11 native of Spain joins John Brown after spending six years suiting up for the Colegio Internacional Costa Adeje in the Canary Islands. Vanoverberghe helped Costa Adeje to three consecutive Canary Island Championships and finished as high as 10th in all of Spain.

Soderquist on Vanoverberghe: "Lisa will come in and help us in the post area, and she could play at the 4 or 5 position. She can score around the basket and also shoot from the outside."