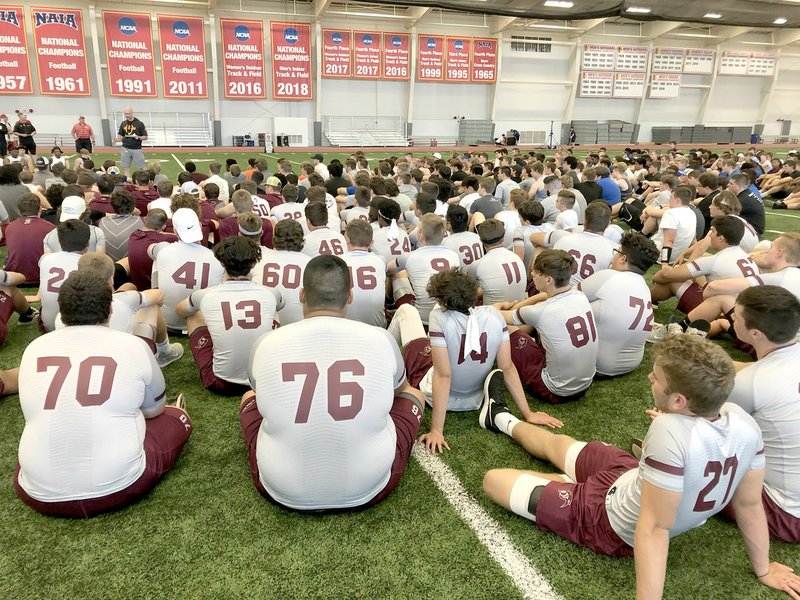 Photo submitted The Siloam Springs football team, along with 10 other teams from Arkansas, Missouri, Oklahoma and Kansas, listen to instructions from the Pittsburg (Kan.) State football coaches during the university's team camp on June 2. The Panthers competed in the camp on June 2-3.

The Siloam Springs football team had a productive two days at Pittsburg State this past week.

The Panthers made the trek last Sunday morning, June 2, to Pittsburg, Kan., to attend the Gorilla's annual team camp.

Siloam Springs took 44 players to the camp and had a total of five practices in two days, which amounted to around 300 offensive and defensive snaps total.

"Everybody got a lot of reps," said head coach Brandon Craig. "We had a lot of kids working on both sides of the ball, a lot of kids getting to see live varsity action. It was really good for our guys."

The last night of camp was a night of competition and the Panthers got to compete in five games.

"We saw our kids compete hard against some really tough teams," Craig said. "It was a really great experience for us."

It was the Panthers' second straight year to visit the Pitt State camp.

Craig said the Panthers had a better idea of what camp would be like this time around.

"Everybody was more familiar with our schemes and the camp format and what to expect," he said. "They weren't going into it blind like we did last year. At camp you're always going to have some ups and downs, but I thought our kids handled it well. I thought we were physical. I had some coaches come up to me and thought we were much improved from last year. The knowledge of what we're doing and our competitiveness was outstanding."

"I thought Jackson Norberg on offense did a lot of good things for us," Craig said. "He really played tough, physical football while still having a burst. He took over that number one running back spot."

Craig said senior quarterback Taylor Pool did a good job of running the offensive and got a lot of snaps.

Pool is likely to be the Panthers' starter at quarterback with sophomore Hunter Talley as the backup.

"Talley did a great job (at Pitt State)," Craig said. "He does not carry himself like a sophomore."

The Panthers did lose quarterback Colin Evers, who moved back to Iowa with his family. Evers was getting reps at quarterback and elsewhere on the field. He also was the Panthers' punter and averaged nearly 43 yards per punt.

"One of the biggest things we're going to miss about Colin is his punting," Craig said. "His punt average was awesome. He did a tremendous job."

On the offensive line, the play of Jace Sutulovich stood out, the coach said.

"Fesler's motor ran really high the whole time we were there," Craig said. "I heard numerous coaches talking about how tough he was to block. Same thing with Mariano. He was noticed by the Pitt State coaches. They noticed how hard he plays."

The Panthers resume summer workouts from 7 to 9 a.m. on Monday through Thursday this week. The varsity will compete in 7-on-7 action at Bentonville West on Tuesday.

Panther Academy, a workout time for first through sixth graders with Siloam Springs football coaches, is available at Panther Stadium from 9:15 to 10:15 a.m. on Tuesday and Thursday of this week.