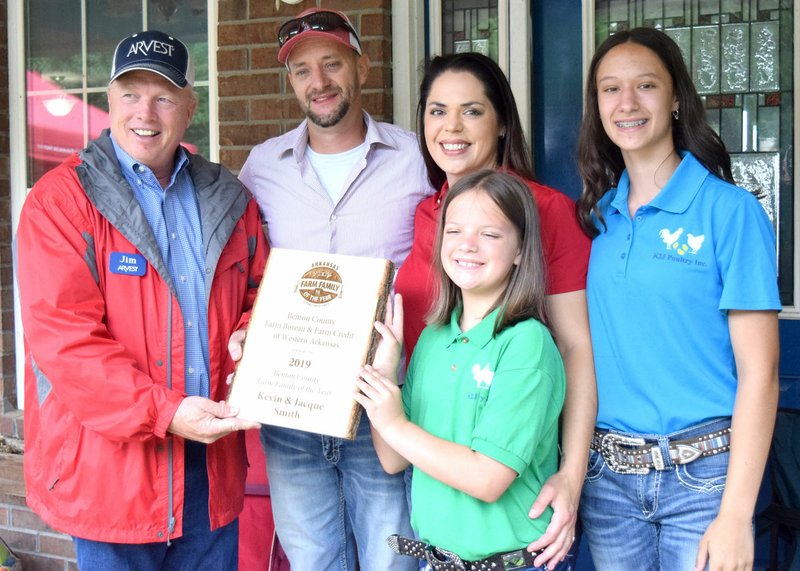 DECATUR -- Agriculture has always been a big part of the Arkansas landscape. Whether it is rice in the southeast or poultry in the northwestern parts of the state, the agriculture industry is a vital part of the state's economy.

The recent long periods of rain and the resulting floods have put a serious damper on all types of farms in Arkansas but, for one family farm near Decatur, in Benton County, the rain stopped, the clouds parted, and the sun shone brightly as the family was recognized for its achievements in the agricultural community.

With family and friends looking on, Kevin Smith, along with his wife Jacque and their two children, Jacey (14) and Kylie (9), were presented with the 2019 Benton County Farm Family of the Year award at their 150-acre family farm outside Decatur on June 7. Benton County Judge Barry Moehring presented the Smiths with the award.

Judge Moehring took great pride in recognizing not only the Smiths' contributions to the economy in Benton County but also the county-wide importance of agriculture in the state.

"Agriculture is very important for Benton County and there are some around the county that don't recognize this," Moehring stated. "Not only is this is a great opportunity for the Smith family but it shows how important agriculture is to Benton County. This is the number one agriculture county in the state. It's a driver for the economy. We always think about things that happen in Bentonville and other places, but the fact is that agriculture is what builds this economy and what built this county and is really vital."

The Smith farm is located about 5 miles east of Decatur along Arkansas Highway 102. The operation includes 30 head of Limousin cattle, 30 market goats and five broiler houses.

The broiler houses produce about 675,000 broiler chickens a year. Along with their chickens, the Smiths market 25 to 30 calves, around 10 kids (goats) and five broiler flocks or slightly more than four million pounds of chicken annually.

According to Johnny Gunsaulis with the Benton County Extension Office, "The Smith family's operation represents one of the largest industries in Arkansas; agriculture and related enterprises support approximately 22 percent of all families in the Natural State. Benton County applauds the strong work ethic and incredible responsibility the Smith family maintains."

In addition to serving on the Benton County Women's Committee, Decatur/Maysville 4-H Club, Farm Expo and Moms on the Farm organizations, Jacque is the special-needs math coordinator for the Decatur School System. She was also the first Decatur educator to earn the National Board Certified Teachers certification, the highest level a teacher can achieve in this country. She shares this distinction with five other Decatur educators. Jacque and daughter Jacey also founded the Decatur Summer Mobile Library in 2014.

Jacey and Kylie are both active in the Decatur/Maysville 4-H Club and have shown their prize market goats in the Benton County Junior Livestock Auction for the past few years. Jacey is also a member of the Decatur Future Farmers of America chapter, as well as an active member of the Decatur Lady Bulldog junior high basketball and track teams.

Kevin Smith concluded the program with a few words of thanks to those gathered next to his front porch.

"It is an honor and a privilege to be recognized for this award," Kevin Smith concluded. "We would like to thank our families, friends and all who supported us."