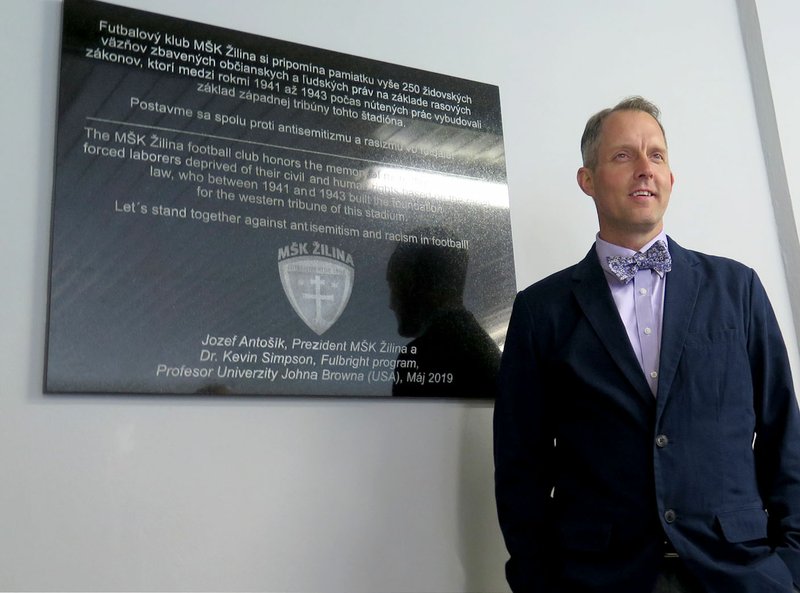 Photos submitted Kevin Simpson, psychology professor at John Brown University, stood by the memorial plaque installed in honor of the more than 250 Jewish forced laborers who helped build one of the grandstands at a soccer stadium in Slovakia that is now home to one of the country's top teams -- M&#352;K &#381;ilina. The memorial was unveiled during a ceremony on May 15.

Kevin Simpson, a psychology professor at John Brown University, uncovered a link between the history of soccer and the Holocaust in Slovakia while teaching abroad on a Fulbright Grant last semester.

Simpson found that more than 250 Jewish forced laborers helped build the north tribune (grandstands) of the current home stadium for one of the country's top soccer teams. Working on the stadium may have allowed the laborers to escape Nazi death camps, he said.

The MŠK Žilina football club honors the memory of the more than 250 Jewish forced laborers deprived of their civil and human rights based on the racial law, who between 1941 and 1943 built the foundation for the western tribune of this stadium.

Let’s stand together against antisemitism and racism in football.

In May, Simpson's research led to the placement of a memorial plaque at the Štadión pod Dubňom (Stadium under the Dubeň Hill) in Žilina, Slovakia, where the MŠK Žilina team and soccer club is based.

The link between sports, psychology, history and the Holocaust

This isn't the first time that Simpson has found a link between sports history and the Holocaust. His fascination with the intersection of the two subjects led him to write the book, Soccer Under the Swastika: Stories of Survival and Resistance during the Holocaust, which was published in 2016. The book explores existence of the sport in Nazi camps and ghettos across Europe.

Simpson, who teaches classes in sports psychology and the psychology of the Holocaust at JBU, said his passion for soccer began at an early age. He grew up playing the sport and went on to play for JBU.

Simpson's interest in soccer and sports continued as he became a psychology professor. Then he had the opportunity to co-teach a class about the psychology of the Holocaust. That led to Simpson presenting a seminar on the topic at the United States Holocaust Museum in Washington, D.C., about 10 years ago.

"Psychology and history have a kinship I would say, there is a natural connection there," Simpson said. "History often looks at the bigger picture kinds of themes and questions. ... Psychology can contribute in a fantastic interdisciplinary way by answering some of the why questions."

Social psychology deals with examples of propaganda, group persuasion, obedience, racism and discrimination, which are often illustrated through examples in history. Psychology can help explain perpetrators, the victim's experience and bystanders, he said.

"In psychology we're really interested in explaining why people choose to get involved or choose to ignore or fall pray to indifference," Simpson said.

Discovery of the Žilina Work Center

About a year ago, an entry about the Žilina Work Center in Slovakia, published in the 3rd volume of the United States Holocaust Memorial Museum, Encyclopedia of Camps and Ghettos, 1933-1945, caught Simpson's eye because it mentioned the construction of the soccer stadium.

Later, he learned he was the recipient of a Fulbright Grant to teach classes in sports psychology and the psychology of the Holocaust at Comenius University in Bratislava, Slovakia, during the spring 2019 semester. Simpson went back to the brief one-page entry, knowing he may have the opportunity to conduct research and do interviews while visiting the country.

Once Simpson began researching in Slovakia, he faced a language barrier as well as the challenge of accessing the national archives, which were organized and built around the communist system. He reached out to historians from the region for help. With the help of advisers such as Pavel Frankl, president of the Jewish Community of Žilina; Ján Hlavinka, director of the Dokumentačné Stredisko Holokaustu in Bratislava; and Michal Vanek, deputy director of the museum of Jewish Culture in Bratislava, he was able to find records and testimonies from the camp. (Simpson is hopeful that Vanek will receive a Fulbright Scholarship to teach at JBU in 2021.)

Simpson learned that the Žilina Work Center was located next to a larger and more well-known transit camp. The work center was open and active from around Sept. 1, 1941, or possibly earlier, until the laborers were liberated during the Slovak National Uprising in 1944.

Simpson said work on the stadium began in late 1940 and took about a year, continuing through the winter months. He also found evidence that a local factory owner, Arpad Stark, had his business stolen by the fascist state in support of the construction project and that Stark, his wife and two children were deported to Auschwitz where they all perished.

A few testimonies from the Žilina Work Center say that conditions were not terrible, according to Simpson. Jews were given army rations and allowed to wear civilian clothes. For the most part families stayed together, children attended schools and visitors were also allowed, he said.

"These camps weren't meant to murder by labor like a lot of camps were," he said. "They served the fascist state."

At the labor camp, Jews also worked on carpentry, furniture, textiles and woodworking for the fascist state under the watch of the Hlinka Guard.

Simpson said he believes that although the laborers who worked in the camp were prisoners to the fascist state, they were temporarily saved from the major deportations in 1942 to the larger Nazi camps that were designed to exterminate their occupants.

Slovakia joined the Axis in November 1940, later participating in the invasion of the Soviet Union and declaring war on Britain and the United States, according to the Holocaust Encyclopedia published on the U.S. Holocaust Memorial Museum website, encyclopedia.ushmm.org.

In fascist Slovakia, collaboration with the Nazis led to the deportation of nearly 90,000 Jews and more than 80 percent of these citizens were murdered, according to Simpson.

The importance of remembering

Today, the Štadión pod Dubňom is a much happier place than it once was. The MŠK Žilina team has won seven championships in the 12-team Slovak League since 2001 and competed in the UEFA (European) Champions League in 2010/2011. The team has also transferred many players to larger teams in Italy, Germany and England, as well as to the Slovak national team, according to club president Jozef Antošík.

The MŠK Žilina Football Club also trains 300 boys, age 6 through 19, at its youth academy, providing students with accommodations, food and education. The most talented boys are promoted to the adult team, then have the opportunity to go on to the even larger teams, Antošík said.

In March, Simpson made the two-hour trip from Bratslovia, where he was teaching, to the city of Žilina to attend a MŠK Žilina game. Since the facility underwent a complete renovation in 2007, he wanted to see if any part of the original stadium still existed. He discovered the original concrete portions of the north grandstand were still in place.

Then in early April, Simpson met with Antošík, who readily agreed to have a memorial plaque placed in the stadium.

Antošík said he was surprised that an American was initiating the project, but once he learned why Simpson was interested in the project, he didn't hesitate to have the plaque installed. During their first meeting, the men put together a plan and the memorial was installed less than a month later, Antošík said.

About 75 people attended the installation ceremony on May 15, including Antošík, members of the MŠK Žilina soccer team, city officials, members of the media and representatives of the Jewish community and the U.S. Embassy.

Antošík said he is hopeful the plaque will be noticed by people visiting the stadium and make them think of of the reasons it was installed. It is important for all the people, especially the young sportsmen who use the facility, to know what happened there, he said.

"I believe that this knowledge about the past can help to form their clear opinion on the Holocaust and racism," he said.

Simpson is also hopeful the memorial will help people remember and reflect on the history of the Holocaust.

"I hope that they realize the history that comes before them is one that needs to be remembered," he said, "because in forgetting these stories, we forget why they happened originally, not only the atrocity of this history, the mass murder, the genocide, the fact that so much of it happened because bystanders didn't get involved, they didn't protest at an earlier point that might have stopped it earlier."