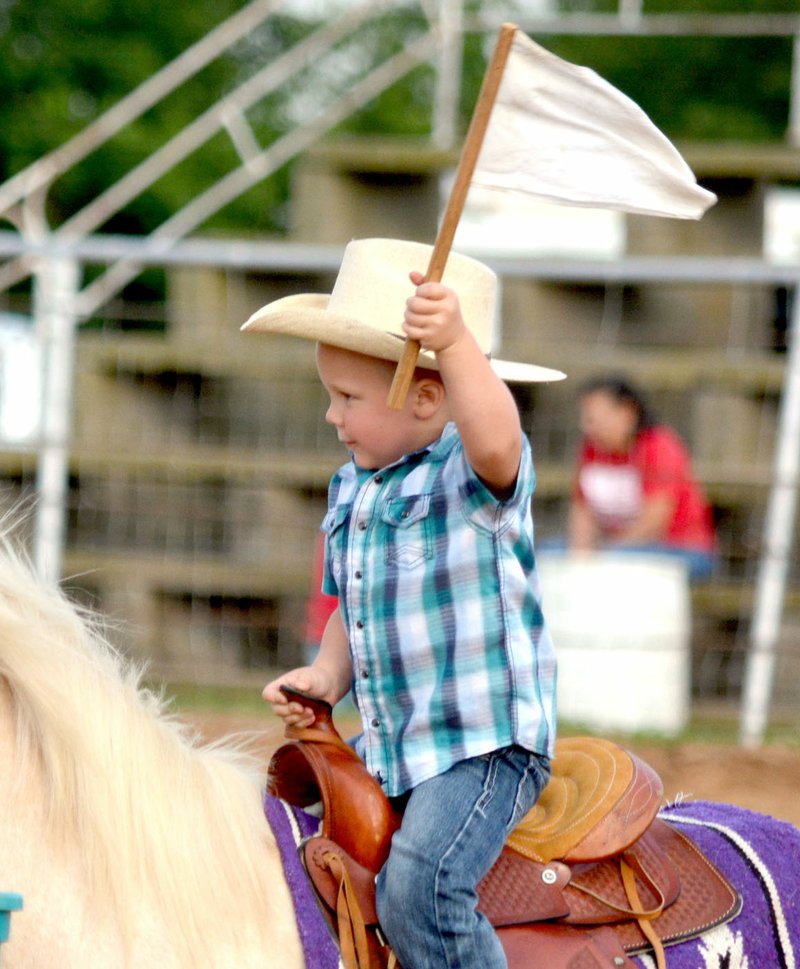 Adriana Jessen/Special to the Herald-Leader A young rider proudly held his flag while competing in a flag race at the Siloam Springs Riding Club on June 11. The recently upgraded rodeo grounds not only host annual rodeo, but also serve as a venue for events such as play nights and barrel races year round.

The Siloam Springs Rodeo Grounds is getting a face lift this year just in time for the 61st annual Rodeo, which begins on Thursday and lasts through Saturday.

The $70,000 worth of upgrades will make the rodeo facilities safer for competitors, personnel and animals, according to Karen Davis, a Siloam Springs Riding Club board member.

In addition, the riding club has partnered with the city to create a new entrance gate for horse and stock trailers off of Sue Anglin Drive, which will move the trailer traffic off of Cheri Whitlock Drive and make the area safer and less congested, according to Harvey Trogdon, president of the riding club.

The riding club decided to make the much-needed upgrades because it appears the rodeo grounds will be staying in place for the foreseeable future, according to Davis.

The club has been in a holding pattern for more than 15 years as discussions about building new rodeo grounds on city-owned property on South Arkansas Highway 59 took place, according to a June 2018 article in the Herald-Leader. The club has a 99-year contract with the city to provide facilities for the rodeo club.

In late 2017, the school district made an offer on the land and it began to look like plans to sell the current rodeo grounds and build a new facility were taking shape, but then negotiations fell through after the cost of rebuilding the facility came in $600,000 over budget.

"We are ready to stay," Davis said. "We didn't really want to go anyway. We weren't opposed to going, but this is home. The city has been good to cooperate with us about the street being closed off so we'll have access out there for parking. I think we'll be fine here."

The former facilities have been in place as long as Trogden and Davis can remember. Riding club members began work on the upgrades in mid-April. The club was able to accomplish a lot despite the rainy weather and resulting mud, thanks to help from volunteers in the club and the community, Trogdon and Davis said.

The new bucking chutes and sorting pens have several safety features for humans and animals, Davis said. They were also constructed to be easily movable in the future if necessary, she said.

"A lot of it was a safety issue," Karen said. "They were really old and these are newer and safer."

Once the old bucking chutes were torn down, it became apparent that they played a role in bracing the announcer's stand, so it had to be torn down as well, Trogdon said.

"They didn't intend to have to tear the announcer's stand down so that was another expense," Davis said. "We had to come up with a large sum of money and also go to the bank (for a loan)."

The new stand is smaller, but it meets the club's needs, Davis said.

Davis and Trogdon are hopeful the improvements will pay off in years to come.

Last year, more than 420 competitors from eight states and 6,000 spectators took part in the three-night rodeo, Davis said. However, the rodeo grounds are busy year-round, hosting events up to three nights a week during the summer months, including Monday night barrel races and Tuesday night play days, she said.

In addition, two Ozark Junior Rodeo Association events take place at the Siloam Springs Rodeo Grounds, as well as other bucking stock and ranch rodeo events throughout the year.

The horse industry, which includes rodeos, has an impact on the state and national economy. In Arkansas, approximately 65,000 households own a horse or other equine, and the equine population of Arkansas is estimated to be 168,000, according to the Arkansas Farm Bureau website, www.arfb.com. The average cost of horse ownership in the state is $3,000 per year and horse owners must pay the costs of ownership whether or not they are actively competing in rodeos or other equine events.

Nationally, the horse industry contributed approximately $50 billion to the U.S. economy in 2017 and directly created 988,394 jobs with wages, salaries and benefits totaling an additional $38 billion, according to the American Horse Council website, www.horsecouncil.org/economics/. The direct effect creates ripples in other sectors of the economy that are estimated to contribute a total of $122 billion to the U.S. economy and create 1.7 million jobs.