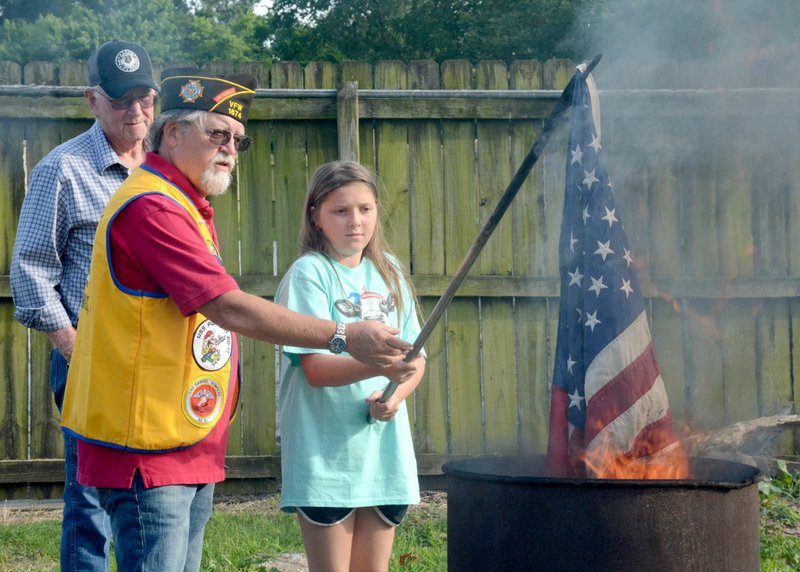 VFW members and their friends and families, held a brief ceremony which included a speech by Lt. Col. Steve Gray, a member of Post 1674, and a final salute, reciting of the Pledge of Allegiance and folding of the flag.

With the help of the Siloam Springs Fire Department, about 300 flags that were no longer fit for service were carefully burned, in accordance with flag etiquette.

U.S. Flag Code states that "The flag, when it is in such condition that it is no longer a fitting emblem for display, should be destroyed in a dignified way, preferably by burning."

The VFW has made a tradition of hosting a flag retirement ceremony on or around Flag Day, according to Frank Lee, Post 1674 commander.

"We try to retire unserviceable flags as close to that date as possible to pay respect and honor to our Nation's colors that so many have sacrificed for and to try to teach patriotism to our younger generation," Lee said. "There were several that attended who had never witnessed a flag retirement ceremony.

"Our post takes pride in knowing we have retired "Old Glory" in a dignified and respected manner."

The post also offers a drop-off box in front of the building where community members can drop off flags that are in need of retirement year-round.

On May 30, 1916, President Woodrow Wilson issued a presidential proclamation establishing a national Flag Day on June 14, according to the Library of Congress website, www.americaslibrary.gov. The day commemorates the adoption of the Stars and Stripes as the official flag of the United States on June 14, 1777, the site states.

There have been 27 versions of the flag so far and stars have been added to it as states entered the Union. The current version was established on July 4, 1960, when Hawaii became the 50th state, the site states.