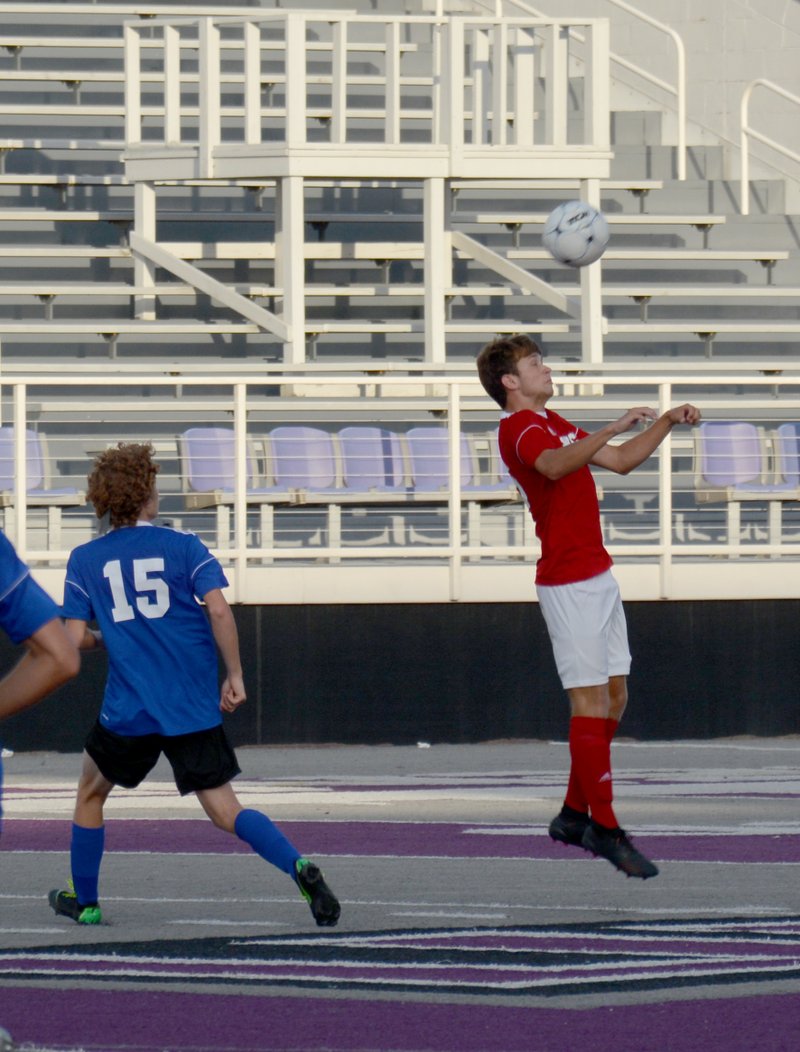 Graham Thomas/Siloam Sunday Former Siloam Springs standout Eli Jackson, right, heads the ball for the West All-Stars during the Arkansas High School Coaches Association All-Star Boys Soccer Match on Friday at Estes Stadium on the campus of the University of Central Arkansas in Conway. The East defeated the West 3-1.

CONWAY -- Eli Jackson showed his versatility Friday night at the Arkansas School Coaches Association All-Star Boys Soccer Game, while Wyatt Church got an unexpected phone call Thursday, which led him to playing in the game as well.

Jackson played a large portion of the game at center midfield while Church manned the goal for nearly half the night, but the West All-Stars ultimately fell to the East 4-1 at Estes Stadium on the campus of the University of Central Arkansas.

For Jackson, a John Brown signee with 54 career goals and 27 assists, he was one of seven forwards on the roster for the West and he wasn't sure what position he would play this week.

"Today they (the coaches) said I would be playing center mid," Jackson said. "I said, 'all right,' because I've always admired that spot. I love it because the center mid can control the game and it's so beautiful in that spot. I was just happy to be able to step in and help the team in that way."

After watching Jackson play against his team and score the game-winning goal in the state quarterfinals back in May, Hot Springs Lakeside coach Craig Moses knew Jackson would be able to do a lot of different things for the West.

"Eli, he's very versatile," said Moses, a West assistant. "He didn't play much forward tonight. We pushed him up there later on. He's very versatile player. He's been very well trained and coached. He's very coachable and he'll do whatever it takes for the team. That just shows his character and what kind of person he is."

For Church, he got a call on Thursday evening, asking if he would be interesting in helping the West, which was short on goalkeepers on its roster after some no-shows of original selections.

"He got in late (Thursday) night," Moses said. "I woke up about 11:30 and got his paper work all together. We finally got him a room about 12 o'clock (Friday morning). I know he was probably a little tired, but he came out here with a great attitude and worked hard."

Church, one of the top goalkeepers in the 5A-West, said it was a surprise to get to play in the game.

"Yeah it was definitely a surprise," he said. "I knew I would be a little out of shape for the game. The last time I touched the soccer ball was state final. I knew it would definitely be a challenge only getting to practice once with the team. I was glad I could have the opportunity and I really enjoyed it."

Both Jackson and Church enjoyed the experience of playing in the All-Star game.

Said Church: "Yeah I definitely agree. You hear of all these players from the West and from the East, from all over Arkansas, that are all outstanding players. You see them all here, playing against them, playing with them was a great experience that not many people get, so I really appreciate the experience."

The East took a 2-0 lead in the first half on goals from Jonesboro's Joe Pacheco and Ryan Lee of North Little Rock. An own goal put the West in a 3-0 hole, but the West got one back on Denilson Pinto's goal in the second half. The East answered with a goal from Carlos Fabian of Little Rock Hall to set the final score.

Lee was named the game's most valuable player, while Pinto and Thomas Bullington of Bryant were the most outstanding players for the West and East, respectively.