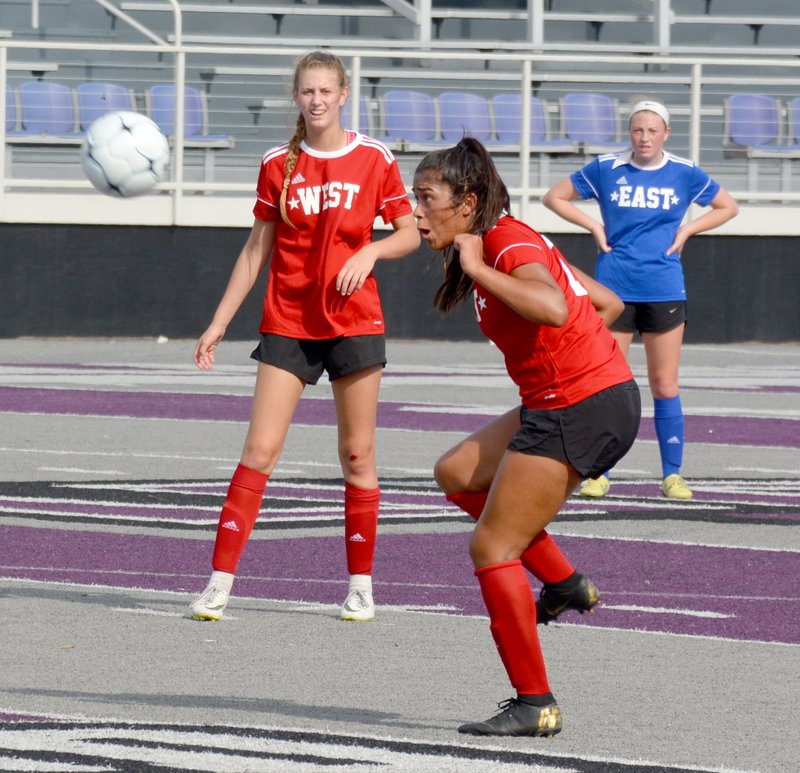 Gentry, who was an assistant coach for the West, told the team of how Morales scored a hat trick her junior year during the 2018 6A-West Conference Tournament finals against Benton in a 5-2 Siloam Springs victory.

"I was bragging on her because of how well she strikes the ball," Gentry said. "I knew she was a phenomenal player who has a really live leg."

It was a special moment for Morales, who helped the West to a 3-2 victory over the East on Friday during the Arkansas High School Association All-Star Soccer Game at Estes Stadium on the University of Central Arkansas campus in Conway.

"That just kind of gave me goosebumps," said Morales, who played more than half the match at center midfield for the West.

Morales, who scored 55 career goals and had 30 career assists and won three state titles at Siloam Springs, was an easy choice to select for the West All-Stars.

"She's a great young woman," Gentry said. "When her name was listed, we knew that was a no doubter. She worked incredibly hard the two days we were here, and obviously you see why (Siloam Springs was) so successful with her."

Morales said she enjoyed her experience at All-Star week and it was different than what she expected.

"I thought it was going to be each of the conferences (hanging out) separately, but we were all together," she said. "I liked how we had chemistry."

Morales was excited her team won the game as well.

"Especially for my last game for high school," she said. "It's good to get a win."

Gisselle Estrada of Springdale Har-Ber scored the game's opening goal and Bentonville's Tyler Reash added two goals as the West took a quick 3-0 lead. The East got two goals back from Mattison Elsinger of St. Joseph and Ahnya Ranaraja of Mount St. Mary to cut the lead to 3-2 late in the second half.

Julia Dick of Benton was the game's most valuable player, while Russellville's Kate Lane and Ranaraja were the most outstanding players for the West and East respectively.