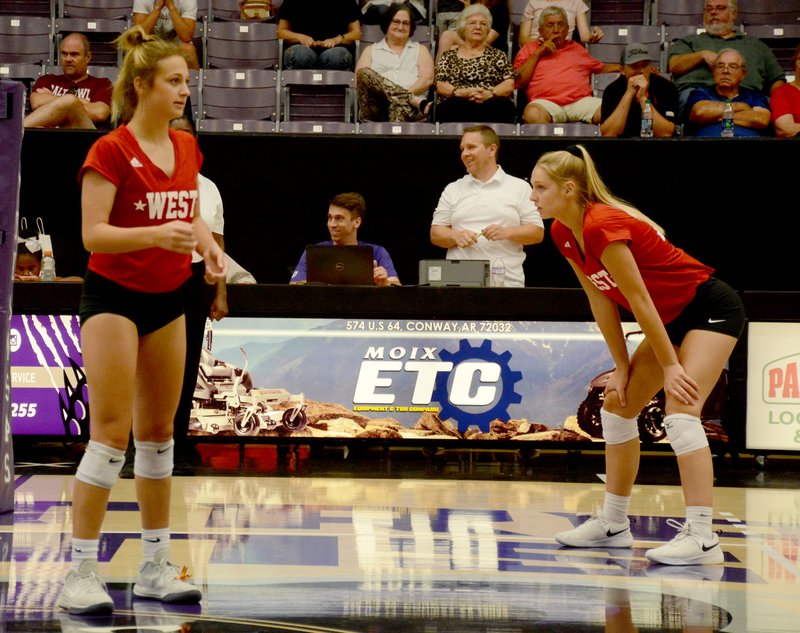 Graham Thomas/Siloam Sunday Former Siloam Springs volleyball standouts Chloe Price and Ellie Lampton get in position for the West All-Stars on Friday during the Arkansas High School Coaches Association Volleyball Game at the Farris Center on the campus of the University of Central Arkansas. The East won four straight games to defeat the West 4-1.

With the match wrapping up in the fifth set, Price and longtime Siloam Springs and club volleyball teammate Ellie Lampton went through their traditional handshake one last time on the floor as West All-Stars.

"I cried on the court," Price said. "We did our handshake one last time and I cried."

West head coach Jennifer Golden of 5A-West rival Greenwood said it was fun to get to coach Price and Lampton after coaching against them for so long.

"It was a pleasure," Golden said. "They worked hard. They had great attitudes, and it was nice to see a different side of them. Definitely a competitive side but a side that's on your side. That's fun."

Both Price and Lampton started the match for the West who cruised to a 25-9 win in the opener.

"They put everything out there," Golden said. "They had a great two practices and they deserved the spots they earned."

It was an enjoyable experience, the players said.

"It was fun," Price said. "It was hard getting to mesh together after only two practices."

The West only had two middles on its roster and seven outside hitters, so Lampton as well as Shiloh Christian's Lexi Richards, was asked to step in and help in the middle.

"There were only two middles on the whole team," Lampton said. "It just ended up that way, so I had to kind of step in."

Nettleton's Sydney Sample was the game's most valuable player with 12 digs from the libero spot. Valley View's Grace Calhoun and Greenwood's Abby Cagle, who had 13 kills, were the most outstanding players for the East and West, respectively.