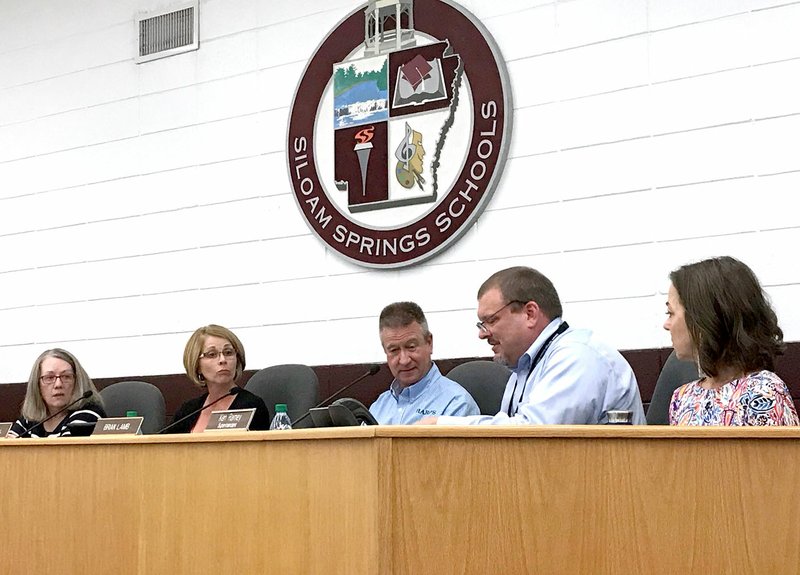 Janelle Jessen/Siloam Sunday Incoming Superintendent Jody Wiggins spoke into one of the school board's newly installed microphones as he conducted the second half of Tuesday's school board meeting. Retiring Superintendent Ken Ramey turned in his keys and said his goodbyes after the first half, before turning the meeting over to Wiggins. The official transition between Ramey and Wiggins will not be complete until July 1. Pictured are Connie Matchell, board secretary (left); Audra Farrell, board vice president; Brian Lamb, board president; Wiggins; and Bambi Lawlis, executive administrative assistant. Also present were Travis Jackson, board legislative liaison; and Grant Loyd, board member.

Halfway through Tuesday's school board meeting, Ken Ramey handed the keys to the Siloam Springs School District over to Jody Wiggins and turned the meeting over to the incoming superintendent. Ramey then said goodbye to board members and administrators, with many hugs and handshakes, before leaving the building.

The change in leadership was not unexpected. In January, Ramey announced plans to retire at the end of the school year after a 52-year career in education. The school board went through a careful hiring process, choosing four candidates to be interviewed from a field of 15 applicants before selecting Wiggins for the job in April.

For an in-depth article on Ramey's retirement and the legacy he leaves in public education, see the special progress edition published in the June 26 issue of the Herald-Leader.

Tuesday also marked the first school board meeting to be video- and audio-recorded, according to Wiggins.

Act 1028, passed during the 2019 legislative session, requires school districts to make audio recordings of school board meetings and keep them for one year. During Tuesday's meeting, the Siloam Springs School Board passed a policy, in compliance with the law, requiring all meetings of the school board and subcommittee meetings to be recorded. The only exceptions are for executive sessions as well as employee termination hearings and student disciplinary hearings that are closed to the public.

Wiggins said the district will be going the extra mile and recording video in addition to audio. In preparation, the school board room inside the Siloam Springs Middle School was outfitted with recording devices and cameras, including microphones for each of the board members and a microphone at the podium where presenters address the board.

Wiggins said the district decided to do two trial runs and record the meeting on Tuesday and the meeting on July 16 for practice before the new law goes into effect on July 24. Recordings will be published on the school website and will be available for one year, he said.

In addition to the policy about recording school board meetings, school board members approved a list of 15 additional policy updates. The updates are recommended by the Arkansas School Board Association and are the first of many resulting from laws passed during the 2019 legislative session, Wiggins said.

In other business, school board members appointed officers for the coming year, naming Brian Lamb as board president, Audra Farrell as vice president, Connie Matchell as secretary and Travis Jackson as legislative liaison. The board also appointed Connie Matchell the primary disbursing officer and Grant Loyd the alternate.

The school board took the following additional actions:

• Approved a bid of $192,000 from Alliant Insurance for building and content insurance.

• Approved agreements with Ozark Guidance Center for tuition and leases, as well as a memorandum of understanding for school-based mental health services.

• Approved the hiring of a list of more than 150 summer employees, ranging from summer school staff to maintenance and food service employees.

• Approved the transfer of one student from Gentry and two students from Bentonville into the Siloam Springs School District.