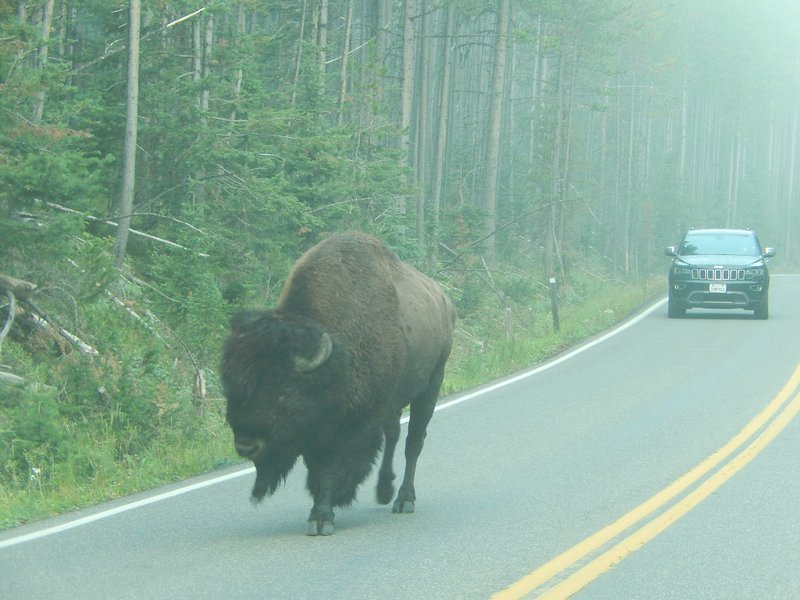 For many years Carol and I had been thinking of traveling around the country. Both of us enjoy the oceans, mountains, forests, visiting friends and family, and making new friends. We're not restless and we enjoy being at home; but in our individual childhoods, our parents traveled a lot so traveling is in our blood.

But leaving home for a year? Hmmmmmm. I didn't think I was ready for something like that. We had looked at trailers, both pull-behind and fifth-wheel, but I kept putting it off as I waited for the right time.

As I was discussing the possibility with Ron, our oldest son, he finally said, "Dad, you and mom have been talking about something like this since I was a kid. You are in your early 70s, and if you don't take the trip now, you'll never do it."

So, in 2017 after mom graduated to heaven, we began seriously looking at RVs. We narrowed the field to Springdale RV in Tontitown, which is only 18 miles from home; and after an hour of going back-and-forth between three rigs, we settled on one.

"By the way, what's the model number of this trailer, Jeff?"

The salesman said, "Let's step outside and look."

I looked at the insignia on the side of the trailer and said a long, "Ooooooooh my," and goose-bumps grew all over my arms. The model number is 200 VML. My mother's name is Verna May Linzey.

Yes, we bought it.

I was chaplain of the USS Yorktown CV-5 Survivor's Club, and the next reunion would be held in Young Harris, Ga. I decided to take the trailer there for its maiden voyage. But that simple one-week trip grew like a dry sponge grows when you put water on it.

Carol said, "As long as we'll be in North Georgia, we'll be half-way to Washington, D.C. I'd like to visit the new Bible Museum."

"Well," I countered, "As long as we'll be in D.C., Gettysburg is only 85 miles north. I want to visit the battlefield again."

"Okay; as long as we'll be in Gettysburg, let's go to Niagara Falls. We've never been there."

And so that trip quickly took shape. We got out the maps and began plotting, planning, and phoning.

After the Yorktown Reunion, we visited the Shenandoah Valley and read about the Blue and the Gray armies in 1863 as they trudged up towards Gettysburg. More on that in a minute.

We spent May 11, Carol's birthday, in the Bible Museum. If you'd like to learn more about the history of the Bible, about the men who put it together, and about the persecution, torture, and martyrdom they suffered, I heartily recommend a visit to this museum.

We then went to Gettysburg. Starting in fifth grade, I've studied the Civil War (also called War of Northern Aggression, War Between the States, War of Separation, War of Southern Independence, and more), and I cringe at the hell they all endured in the various battles. Both Blue and Gray sides had devoted Christians and former slaves fighting for them. I could write a book on this, but we'll move on.

We enjoyed the drive to Niagara, N.Y. Neither of us had seen the Falls before, and we had a difficult time finding words to describe our experience. But I can say: It was astounding! Staying for three days, I took 810 pictures of the Falls and surrounding area (I don't know how many hundred Carol took), and I'm thankful for digital photography.

Returning home, we began gearing up for the longer part of the trip. Before we left, one friend asked, "Are you really planning on living in that 20-foot trailer for a whole year?"

"We'll see how nonchalant you are after two months." And we laughed.

That reminded me of the 1954 comedy The Long, Long Trailer starring Desi Arnaz and Lucille Ball, and I wondered what kind of problems we might have. But Carol is more logical than Lucy, and I am less emotional than Desi, so we should be okay.

I could have been nervous about leaving home for a year; but we were confident that with Dennis and Deborah Eben living in the house and taking care of it while theirs was being built, we would have no worries.

Leaving the house in late afternoon of July 30, we stopped in Oklahoma City to see our kids, then got to the RV park in Weatherford, Okla., after midnight. In the morning, we were surprised to find ourselves on the corner of Voyage Drive and Journey Drive. We laughed, and that set the stage for the next 10 months. I called the easy-driving portions of the trip a Voyage, and the mountainous portions a Journey -- and we encountered both.

After a brief stay in Pagosa Springs, Colo., we saw our daughter in Denver, then went to Yellowstone National Park. North American Bison are often called buffalo, and there was an estimated 60 million in the 1700s, but that number was down to around 561 by 1900. Currently there are an estimated 500,000 in Mexico, New Mexico, and Yellowstone.

We encountered them in Yellowstone, and one of their number nearly made us late for church. Traffic stopped as he leisurely ambled down the middle of the street until all 1,500 pounds of him was good and ready to leave the road. We saw a herd of several hundred about a mile or so away.

Carol is from Seattle, and we spent two months in Washington. Three high-points were Mt. St. Helens, Mt. Rainier, and Hurricane Ridge. (No pun intended.) The cone within the crater of St. Helens is still growing and visibly steaming, and rumblings are recorded beneath both volcanoes almost every day. Hurricane Ridge, in the Olympic Mountains on the Washington Peninsula, is awe-inspiring.

How can I describe the Redwood Forest in California? How can I describe the grandeur of trees that are over 300-feet tall, and between 10 and 30-feet in diameter? All I can say is "A-Mazing!" Our son and his family had fun playing on top the 29-foot-diameter stump of an ancient Sequoia that had been cut down over a hundred years ago.

If time allowed, I could have sat and looked at El Capitan and Half-Dome in Yosemite National Park for hours. Other more energetic people climbed them for hours! But there is a danger here, too. On July 9, 2015, a 5 million-pound slab of granite dropped off the 2,000-foot-high face of the Dome in the night. The Dome is slowly breaking up, but it is so big that deterioration is seldom noticed, even by the hikers.

During our three months in California, we visited family and friends, and made new friends; but we also encountered a 16-inch snowfall, and later a 6-inch rainstorm. That's bad news when pulling a trailer, so I figured it was time to move on when the roads cleared.

On March 30 as we headed for Phoenix, I told my Precious Carol, "I'm kind of looking forward to going home."

"Really? I thought you liked traveling."

"We're in Southern California. Do you want to go home now?"

"No; we have many friends and family from Phoenix to Orlando I want to see; and the USS Yorktown crew is looking forward to us attending the Yorktown Survivor's Reunion in Jacksonville."

We're grateful that we had good weather as we crossed the southern states. The devastating wind and rainstorms waited until we got through those areas. We visited the White Sands National Monument near Alamogordo, N.M.; the Admiral Chester A. Nimitz Museum in Fredericksburg, Texas; went crawdad-hunting with our grandkids near Dallas; and visited the USS Alabama (WWII battleship) in Mobile, Ala.

Have you read about the legendary Fountain of Youth? Starting with the Greek historian Herodotus in the 5th century B.C., there have been many stories of these fountains. But the recent story became famous as the Native Americans told the explorer and conquistador, Ponce de León, about the miraculous fountain; however, it was a ruse to get him to leave their area. Carol and I found the fountain in St. Augustine, Fla., -- just 40 minutes south of Jacksonville.

After finding and drinking some of the water, the famed explorer began to feel much -- the same as before! And I understand that he would have died of old age if a poisoned arrow hadn't killed him in battle when he was 47.

I forgot to mention that the very first RV campground we stopped at was Lake Dardanelle RV Campground down on the Arkansas River. So taking only three days to drive from Jacksonville to Lake Dardanelle, we decided to make that our last RV stop. You don't have to go across the country to stay at a beautiful RV park -- Lake Dardanelle rates among the best.

We were scheduled to stay at Lake Dardanelle until May 17, but on the 14th I said, "Precious, let's leave on the 16th."

"You're funny!" She retorted. "I thought I would be the one itching to get home, and you would be pulling me to keep traveling. But we're reversed."

On May 16, we ate lunch in Alma, Ark., rejoiced when we saw the "Welcome to Siloam Springs" and fountains on the east side of town, and pulled onto our 119-foot-long driveway around 3 p.m. Together we almost yelled, "WE'RE HOME!"

Before unloading either car or trailer, we went straight to our La-Z-Boy recliners that we missed for 10 months. Then Carol said, "Home -- there's no place like home." And yes; Dennis and Deborah Eben took very good care of the house. Thank you, Dennis and Deborah.

Someone asked me, "Well, how was it being cooped up in a small trailer for almost a year with your wife?"

"I wasn't cooped up with her; I rejoiced being with her! We're more in love now than ever. But it is a good feeling to be home."

One of my Southern California cousins asked, "What's the difference in Southern Cal and where you live?"

"In Southern Cal, you can't hardly go anywhere without getting on a freeway. Where I live, you have to try hard to find a freeway.

I went to visit Graham Thomas at the Herald-Leader office. He asked, "Will you take another trip like this in the RV?"

"I don't think so. I'll take short trips; you know, for several weeks or for a month. But I'd rather not pull a trailer."

"For one thing, driving on the freeways is hectic! For example: we saw signs everywhere telling us to watch out for motorcycles. And we do. But many of the bike-riders are not watching out for themselves! Some of them speed at 95 mph between cars that are going 65. How can we be careful for people like that? It can't be done!

"Also, pulling the trailer did cut our motel bills in half, but it doubled our gas bill. That about breaks even -- unless we stay in an RV park for several weeks or more. We can greatly cut costs with weekly or monthly rates.

"But if we stay only 1-2 nights in a park, the gas bill empties the bank. I do enjoy traveling, and you might notice that we will disappear often; but please believe me: there's no place like home!"

I enjoy the easy-paced life, the comfort of home, and friendly atmosphere in Siloam Springs. It is one of the most enjoyable places to live in the USA.

-- Gene Linzey is a speaker, author and mentor. Send comments and questions to masters.servant@cox.net. Visit his website at www.genelinzey.com. The opinions expressed are those of the author.