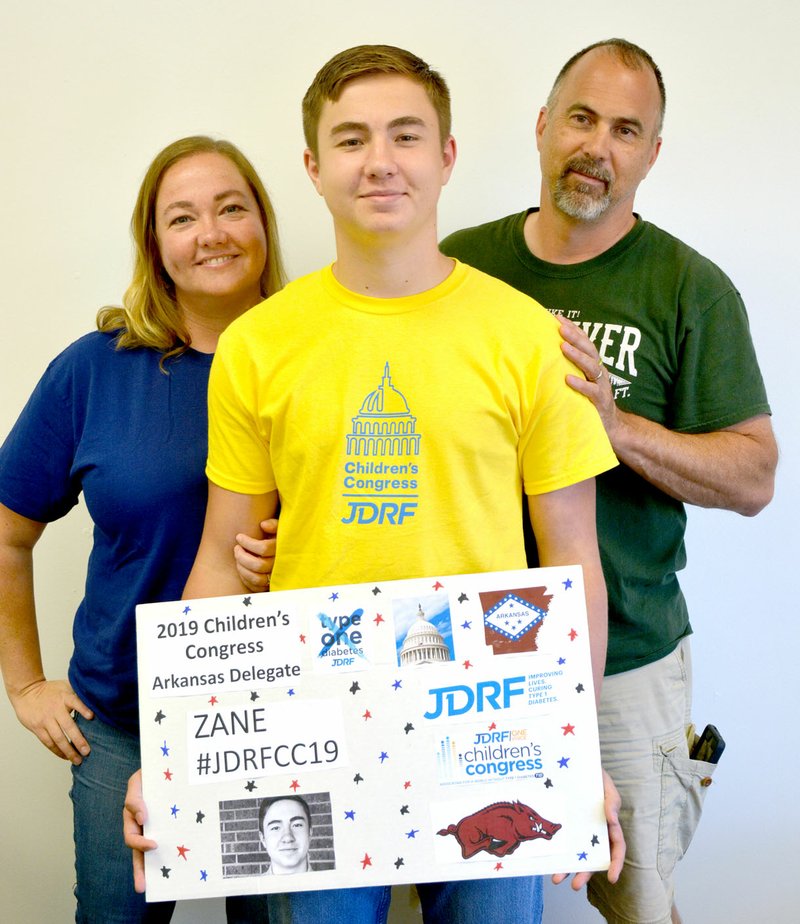 Janelle Jessen/Siloam Sunday Zane Bland (center), a rising junior at Siloam Springs High School, is one of four children in Arkansas chosen by the Juvenile Diabetes Research Foundation to be delegates in the organization's 2019 Children's Congress in Washington, D.C. He is pictured with his parents Jeff (right) and Leslie Bland.

Zane Bland wants people with type 1 diabetes to have a chance to live without having to put their lives on pause because of their disease.

The 16-year-old Siloam Springs High School student is one of four Arkansas children chosen by the Juvenile Diabetes Research Foundation's 2019 Children's Congress as a delegate, according to a press release from the nonprofit.

Type 1 diabetes is an autoimmune disease in which a person’s pancreas stops producing insulin, a hormone that enables people to get energy from food. It occurs when the body’s immune system attacks and destroys the insulin-producing cells in the pancreas. While it’s causes are not entirely understood, scientists believe that both genetic factors and environmental triggers are involved. The onset has nothing to do with diet or lifestyle and there is currently no way to prevent or cure the disease.

The Arkansas delegates will join with more than 160 other children from all 50 states on July 8 - 10 to lobby members of Congress and remind them of the vital need to support type 1 diabetes research that could reduce the burden of the disease and ultimately find a cure, the release states. They will be joined by five international delegates traveling from Australia, Canada, Israel, the Netherlands and the United Kingdom.

While in Washington, D.C., the children will attend a congressional committee meeting to share their personal testimonies, meet with their local members of Congress and Representatives, and meet role models -- celebrities and athletes -- who have the disease.

"Every day these children and their parents face the burden of type 1 diabetes and by sharing their stories they become powerful advocates in the fight to end this disease," said Sue Tull, executive director, JDRF Arkansas Chapter. "The delegates are a representation of millions of other families who need the support of the government. Children's Congress gives the T1D youth community a unified voice in front of Congress and a way to urge our government leaders to continue supporting research.

Zane, who will be starting his junior year in high school in the fall, has lived longer with type 1 diabetes than he has lived without it. On his eighth birthday, his family took him on a trip to Branson, Mo., to celebrate. On the way home, Zane became very sick.

Zane's parents, Jeff and Leslie Bland, had noticed he was getting taller and thinner, but thought it was part of a growth spurt, Leslie said. The next week Jeff took Zane to the doctor. The doctor's office called just minutes after they left and told them to come straight back.

"They did say we caught it pretty early, he didn't have to go into the hospital for weeks," Leslie said.

Currently, Zane is a member of the FFA and plays football for the Panthers. Since Zane was diagnosed, technology has improved a lot and instead of doing finger sticks multiple times a day to monitor his blood glucose followed by insulin injections, he has an insulin pump, a small computerized device that delivers insulin continuously throughout the day. He also has a wireless continuous glucose monitor that checks his blood sugar every five minutes and sends the data to his phone, his parent's phone and to athletic trainer Brian Nitz's phone.

Even with the improved technology, Zane still has a lot of responsibility on his shoulders as he and his parents do the job of his pancreas and manage his blood sugar.

"I have to be a lot more aware of what I eat and I have to be aware of the situations I am in," Zane said. "Like driving, I have to keep food with me and check it before I leave every day. I have to stop every once and a while and check and make sure I'm OK before I keep going."

Zane doesn't let his type 1 diabetes keep him from doing many things, his mom said. But there are times that Zane has to put his life on pause, like last fall when he had to sit out a football game because his blood sugar was too low or the other times when he has had to sit in his car and wait until his blood sugar is high enough to drive.

As an advocate for type 1 diabetics, Zane would like to find a cure for the disease, but he also wants to see research into technology that will make it easier for people with the condition to manager their condition. For example, once the technology is developed to link insulin pumps and continuous insulin monitors, the devices will function as an artificial pancreas, said Leslie, who also volunteers as advocacy team chair for the JDRF Arkansas Chapter.

Keeping patient's blood sugar from spiking too high or dropping too low will protect their long-term health, which would save thousands in future health care costs, Jeff said.

The increase in the cost of insulin, which has caused some type 1 diabetics to have to resort to rationing the lifesaving medication, is also a concern for Zane and his family, although good health insurance has protected them from the worst of the price increases. Leslie said it is especially important to advocate for people without health insurance.

It is also important to advocate for allowing patients to choose their own insulin pumps and monitoring, Leslie said. Some insurance companies require that patients use one particular pump, but different devices work better for different lifestyles, she said. For example, Zane has devices that are impact resistant and waterproof so he can play sports and swim.

The JDFR works with the Food and Drug Administration, the National Institute for Health and other organizations to research the disease, Leslie said. Much research is funded by Special Diabetes Program, which is set to expire on Sept. 3o if Congress doesn't pass additional funding.

Zane is not new to being a voice for type 1 diabetics. He has been a JDRF ambassador for at least four years. He also has a JDFR walk team, he has attended meetings with members of Congress to renew funding for research and has spoken at the annual Run for the Roses Gala. In addition, Zane has met with the NIH director during a tour of the Arkansas Children's Hospital.

Locally, Zane has presented to Kiwanis and Lions Clubs, as well as businesses, and had a float in the Siloam Springs Christmas Parade.

In order to become a delegate, Zane had to fill out a comprehensive application and submit a video.

"He's a pretty good voice for type 1 diabetes in the area," Leslie said.

In Washington, D.C., Zane is looking forward to meeting with Congressman Steve Womack and Senators John Boozman and Tom Cotton. He is also looking forward to a night Segway tour of the capitol as well as getting to meet other teens with his condition.

Zane and his family plan on making a lifetime commitment to JDRF because of its work in advancing improvements or someday the cure, Jeff said.

More information about JDRF is available online at www.jdrf.org.