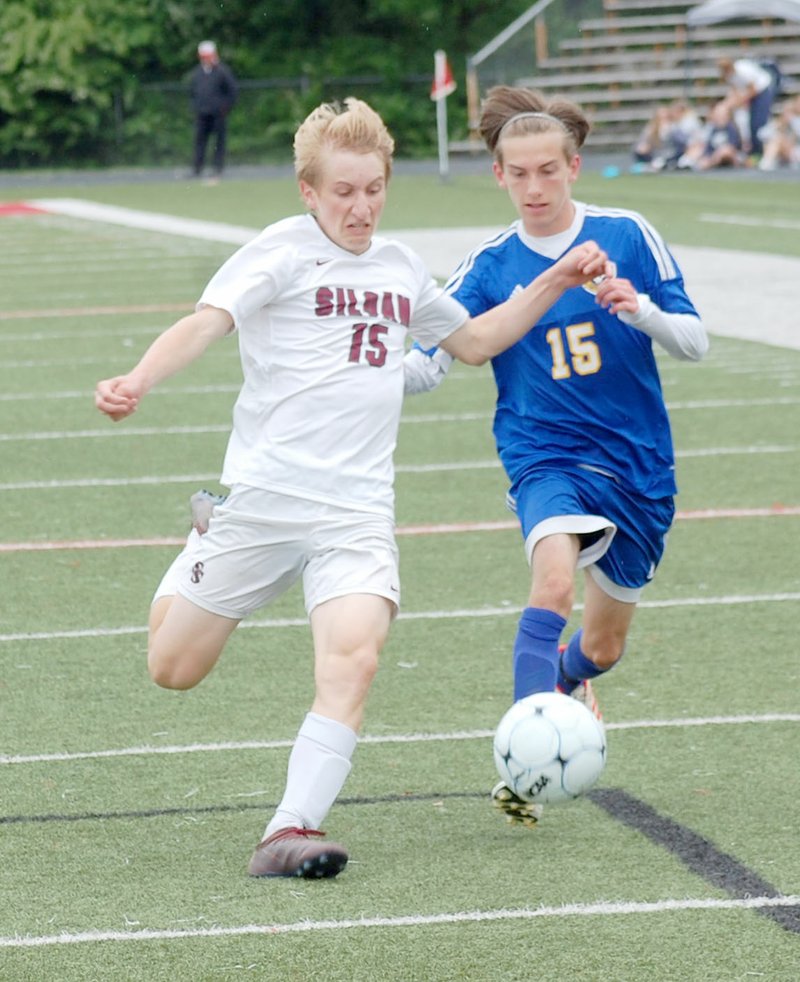 SEARCY -- Danny Daugherty saw his opening and took the shot and it wound up making the difference for Siloam Springs.

Daugherty's goal on an open net in the 52nd minute proved to be the only score of the match as the Panthers defeated Mountain Home 1-0 in the Class 5A Boys Soccer State Semifinals on Saturday afternoon at Lion Stadium.

"I talked about all year, people expect that out of us and people have set the bar very high for us," said first-year coach Luke Shoemaker. "And they think it's easy, but it's a grind. We worked all year to get to that game and beyond. Now if we can put together 80 more minutes of good soccer we can bring the trophy back to where it belongs."

After watching Mountain Home control the game for most of the first half, the Panthers turned up the heat in the second half.

Siloam Springs kept up offensive pressure on the Bombers (19-2), who ended up making a crucial defensive mistake that led to the Panthers' goal.

The ball was played at the top of the Bombers' 18-yard box and Mountain Home goalkeeper Jose Alonso came out of the goal and called off his defenders to make the play. However, the Mountain Home defenders kept playing the ball and it went back to Daugherty, who chipped it over into the open net.

"The keeper came out and the defense was there and they played it out and that's when I got the opportunity," Daugherty said. "I saw that the keeper was out and I just hit it in."

It was a costly mistake for the Bombers, according to head coach Nathan Criner.

"That's soccer sometimes," he said. "We talked to them a whole lot about taking care of what we can take care of. That was one of the things I felt like that was in our control. We made a mistake there, and they capitalized on it because they're a good team and they're able to. Sometimes you can get away with that, and they're a good team and they capitalized on our mistake there."

The Panthers will gladly take the Bombers' miscue.

"I think I've said a lot this year about luck is just hard work when it meets opportunity to find that chance," Shoemaker said. "This is a game if you have any little chance -- if you can finish it -- it can be the entire difference."

Prior to that goal, Alonso had saved several scoring chances for Siloam Springs, including stuffing Eli Jackson on a 1-on-1 in the first half.

"We had a lot of scoring opportunities," Shoemaker said. "Their keeper played a heck of a game."

Siloam Springs goalkeeper Wyatt Church made several saves as well to preserve the clean sheet, including a pair of lasers off the foot of Mountain Home striker Fourny Quentin.

The Bombers controlled the possession in the first half but the Panthers had the upper hand in the second half.

"In the first half I think we underestimated how solid of a team that is," Shoemaker said. "That's a team with only one loss. Two years ago they didn't try to possess it a lot. This year they're possessing the ball, moving the ball. They gave it to us in the first half. We talked at halftime about we can't play with fear. We came out courageous, we fought out tails off and we started to put together good soccer."

Criner said the Bombers expected the Panthers to play better in the second half.

"We knew (Siloam Springs was) going to come out that way," Criner said. "They weren't real happy with the way they played in the first half. I was happy with the way we played. Just tried to get them to keep doing what they were doing. But they came out and they played really, really well in that second half. I thought we played well enough to have a chance.

"I think our boys played hard. They left it all out on the line, and that's what I told them before. Whatever happens, give everything you have and you have no regrets."