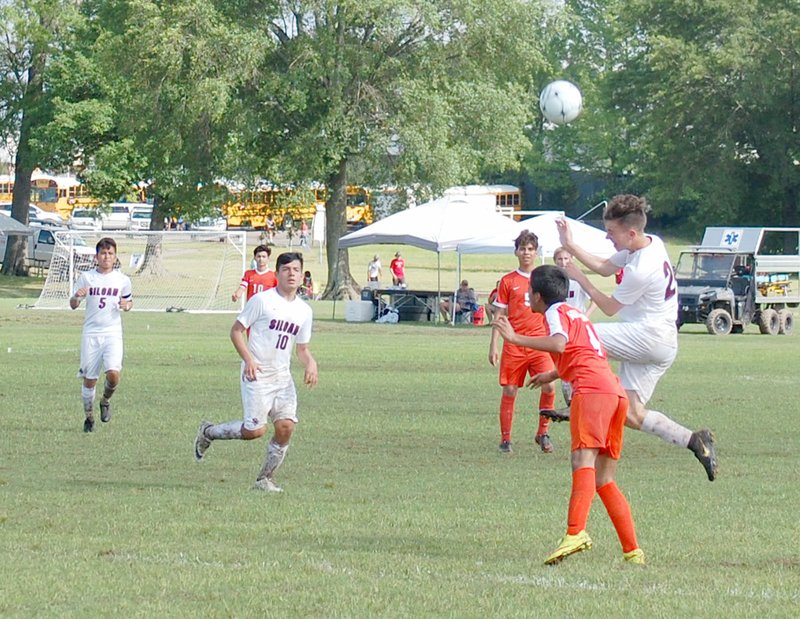 Graham Thomas/Siloam Sunday Siloam Springs junior Danny Daugherty goes high in the air to make a play on the ball against Little Rock Hall on Thursday in the opening round of the Class 5A Boys State Soccer Tournament in Searcy.

Eli Jackson came up big for Siloam Springs once again Friday in the quarterfinals of the Class 5A Boys State Soccer Tournament.

After scoring both of the Panthers' goals on Thursday in a 2-1 opening round win against Little Rock Hall, Jackson took a pass from Julio Maldonado in the extra time period. The ball got stuck in the mud so Jackson took a touch with his right foot, his defender slipped and he fired a rocket upper 90 into the Rams' goal. It was his team-leading 24th goal of the season.

"Getting that shot was just huge," Jackson said. "Just getting that one opportunity. (Assistant) coach (James) Pollard kept telling me the entire game, you'll get at least one good opportunity and if you do finish it."

It was a big shot for the Panthers, who were playing Lakeside for the first time since beating the Rams in the Class 5A state finals in 2011 and 2012.

"We talked about right before the extra time, it only takes one," said first-year coach Luke Shoemaker. "We've got to believe, we've got to fight, whatever it takes. And all year we talk about how I push them for extra time -- for moments where we have to dig a little deeper, and who else but Eli? Before that moment, it wasn't his best game. He'll be the first to tell you about it. But it only takes one."

Reserve forward Miguel Granados gave the Panthers a 1-0 lead with 5:16 left in the first half.

"(Granados) works his tail off. He's positive. The guys love to be around him," Shoemaker said. "He's a knucklehead sometimes, but we talked in warm-ups how good he was looking, how hard he was working, I thought 'I've got to get this kid on the field,' and he didn't disappoint. He had two shots on goal and one in the back of the net."

Lakeside answered just 90 seconds later on a header from Gabriel Morales off a cornerkick. But that

The Rams (15-7) controlled the majority of the possession but couldn't capitalize on scoring chances.

Carson Wleklinski helped the Panthers' defensive effort by clearing a ball off the back line late in the match.

"I mean (Siloam Springs) deserved to win," Lakeside coach Craig Moses said. "We can't score. They did, and that's how the ball bounces. I thought we controlled the match, but again when you can't score on people you can't win. And the name of the game is scoring and we didn't show up to do that today. So Siloam gets to move on, hat's off to them and we get to go home."

Eli Jackson is putting the Siloam Springs boys soccer team on his back for what the Panthers hope is a long postseason run.

Jackson, a senior forward, scored two goals -- including the game winning penalty kick in the 55th minute -- as Siloam Springs defeated Little Rock Hall 2-1 on Thursday in the opening round of the Class 5A state tournament.

It's the third straight season the Panthers have eliminated the Warriors and all three wins have been close ones for Siloam Springs.

"Two years ago (in 2017), I thought they were the best team we played that season," said Siloam Springs head coach Luke Shoemaker. "And that was a semifinal game. They've just got a lot of very skilled soccer players. You can tell that play a lot of soccer. Kind of like a lot of our guys. They get out, they get a lot of touches. They play a lot of ball. The field really didn't faze them as much because they've probably played a lot in conditions like this. They're a talented group."

The Panthers overcame sloppy field conditions at the Devore Sports Complex in Searcy after heavy rain drenched the area on Wednesday and Thursday morning.

Jackson had several good looks before he corralled a Danny Daugherty pass and scored with 22 minutes, 4 seconds left in the the first half to give Siloam Springs a 1-0 lead.

Hall (9-6) tied things up 1-1 with 4:38 left in the half when a Panthers defensive breakdown led to a goal from Gerson Castro.

But Hall around 15 minutes into the second half, the Warriors were whistled for a handball inside the 18-yard box. Jackson blasted home the ensuing PK.

"We just had an opportunity," Shoemaker said. "If I had anyone in the state to put the ball down and hit a PK, it would be No. 11 (Jackson), so I had no doubt he was putting it in the back of the net."