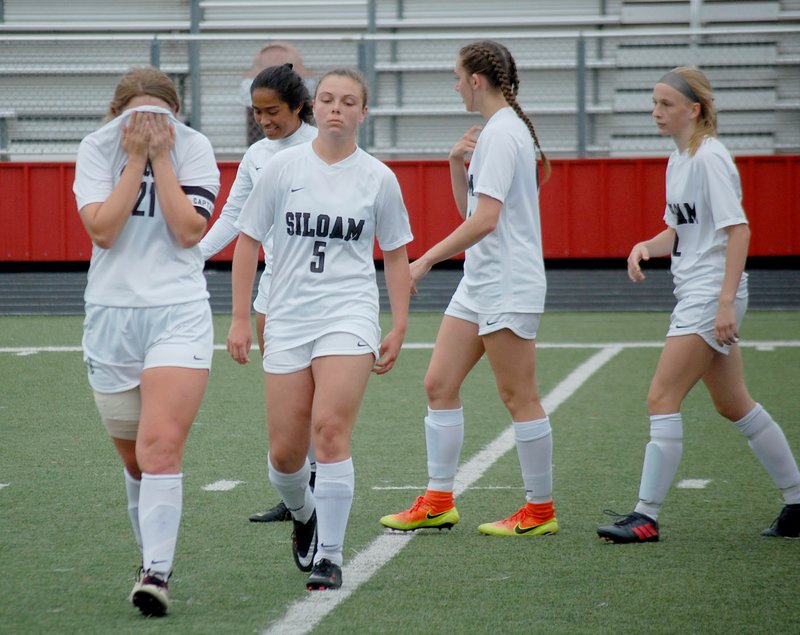 Graham Thomas/Siloam Sunday A dejected group of Lady Panthers walk off the field moments after losing 1-0 to Searcy on Friday in the Class 5A quarterfinals, ending the Siloam Springs' girls run of five straight state championships.

SEARCY -- Siloam Springs' run of state championships had to end at some point, and unfortunately for the Lady Panthers that moment came Friday afternoon.

The Lady Panthers' saw their historic streak of five straight state championships come to a halt with a 1-0 loss to Searcy in the quarterfinals of the Class 5A Girls State Soccer Tournament at Lion Stadium.

It's ironic that Searcy wound up being the team to end the streak as the Lady Lions were the last team to defeat the Lady Panthers in a postseason game in the Class 6A state finals in May 2013. Since then, the Lady Panthers had won 22 consecutive playoff games, including several against Searcy.

The Lady Panthers (14-8) weren't unable to push a goal across in the 80-minute time frame, while Searcy did score with 25 minutes, 45 seconds remaining in the game to the game-winner.

After so many years of success and championships, the loss was a tough one to swallow for the Lady Panthers, who became the first girls soccer team in state history to win five straight state titles last year.

"We fought until the very end," said first-year Siloam Springs coach Abby Ray. "We used every second we had. It's never easy losing, especially when you're used to ending in a win every single year. At the end, we just all came together and cried pretty much in a circle and I told them I was proud of them."

Searcy scored its game-winning goal on a defensive breakdown by the Lady Panthers. The ball was played on the outside of the box and freshman goalkeeper Reina Tiefel ran out to try and make a play on the ball. However, Searcy's Emalee Bryant got to it first and sent the ball toward the vacant Siloam Springs net. Searcy's Emily Teed caught up with the ball and tapped it in for the score.

"That was a super play. I don't know how she got it in there," said Searcy coach Larry Stamps. "We played in a tournament before where you could see the 'Wilson' rolling on the ball before but it was against us. The same thing happened here and they just couldn't get to it."

Ray said everyone involved on the defensive side for Siloam Springs could have done a better job playing that ball, not just her freshman goalkeeper.

"I don't want to put it on her at all," Ray said. "There's 11 kids on the field. We should not have put ourselves in that position. They also had a forward that ran in and tapped it in at the very end, so we could have had a defender track back and try to get it out of the net."

After taking the 1-0 lead, Searcy clamped down defensively on the Lady Panthers, who were unable to mount a serious scoring threat.

"They switched up their formation," Ray said. "Once they scored a goal, they put five in the back and just packed it in, which made it pretty difficult to get forward for us."

Ray said the Lady Panthers may have went down, but they went down fighting.

"Our theme this year was 'dynasty,'" she said. "We said this year we were either going to continue the dynasty or we would 'die nasty' because we weren't going to let anybody just take us out of this. I think that they did that. They made them earn it and we lost to a good team. I think we can be proud of what we did today."

"We knew (Siloam Springs) had a couple of good players," Stamps said. "That 16 (Shelby Johnson) is an awesome player ... She can flat out go. We knew they were solid, and they don't make many mistakes, and they've all got good feet, so we just got lucky. I'll take that."

Field conditions certainly weren't optimal, but the Lady Panthers made the best of it in a 5-0 win against White Hall in the opening round of the Class 5A State Girls Soccer Tournament at a rain-soaked Devore Complex.

The Lady Panthers struggled with the wet field and erratic behavior of the ball because of the conditions. But Siloam Springs (14-7) still dominated the possession and managed to get score a first half, despite not having a lot of control.

"I feel good about it," said Siloam Springs head coach Abby Ray. "I feel like the field was one of the biggest opponents we had today, just playing in all those puddles, but the girls had a blast. That was the difference. We've been playing tight and playing nervous a lot because we don't want to lose. Today we didn't play with that fear. Today we played with just the love of the game, and I think that made a huge difference. They enjoyed playing soccer."

Maddie Vaughan connected on a header off a pass from Shelby Johnson with 8 minutes, 47 seconds remaining in the first half for a 1-0 lead.

Madi Race scored a pair of second half goals, and Halle Hernandez and Bailey Johnson added late goals as the Lady Panthers pulled away.