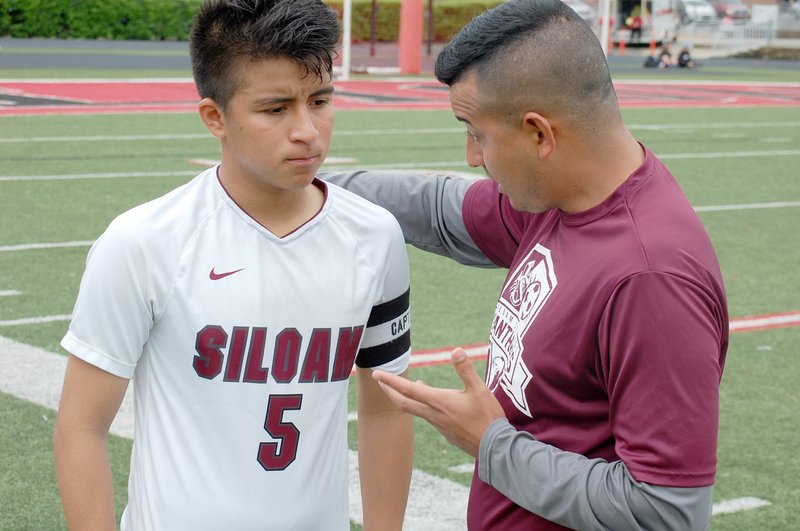 Soccer has been an outlet from the cruel realities of life for Siloam Springs senior Alejandro Palacios.

Palacios, who is affectionately called "Chucha" by this Panther teammates and coaches, fled the crime-ridden Central America country of El Salvador more than three years ago to seek asylum in the United States.

Palacios and the Siloam Springs boys soccer team play Russellville for the Class 5A State Title at 10 a.m. Friday at Razorback Field in Fayetteville. But for Palacios, that battle is a small one compared to the journey he's taken to get to Siloam Springs.

Getting out of El Salvador

Speaking through interpreter Christian Marroquin, Palacios said his family made the decision to get him and his brother out of the area because of safety concerns.

Palacios was from the city of Tacuba in the San Rafael area of Ahuachapan in El Salvador.

"He came because he was running from gangs," Marroquin said for Palacios. "He told me before that the last two months he spent in El Salvador, he wouldn't go outside. He would just stay at home, because his family was trying to take care of him."

Palacios said the MS13 and MS18 gangs are a big problem in El Salvador. He escaped the country through Guatemala and come up through Mexico and crossed the Rio Grande into Brownsville, Texas.

He went to New York for a bit before the immigration system could grant him asylum. He came to Siloam Springs to live with his uncle and aunt and brother on Aug. 27, 2016.

Palacios' parents are still in El Salvador, and he thinks about them often.

"He communicates with his family, his mom and dad are back there," Marroquin said. "He tells me everything. Being without his parents has been the hardest thing. It's very true, after every game he asked me to take a picture of him."

Palacios joined the Siloam Springs soccer team upon his arrival here, and the district athletic department had to submit quite a bit of paperwork to get him eligible to play in the spring of 2017, just for junior varsity season.

Palacios said he was thankful to then assistant coach Luke Shoemaker for making so many calls in an effort to get him eligible to play.

"Coach Shoemaker, stepped up and did all that," Marroquin said for Palacios.

Palacios played JV for the Panthers in 2017 and was a reserve player in 2018 for Siloam Springs.

When Shoemaker returned as head coach for the 2019 season, he knew he had a special player in the 5-foot-3 Palacios, who plays holding midfielder.

"If you look at the stats for our team, he's not going to have a lot of goals or assists," Shoemaker said, "but his value for the team has no measure. Without Chucha and the role he plays it would be very hard for us to have been as successful as we've been."

Senior forward Eli Jackson said he doesn't worry about what happens in the midfield because of a player like Palacios, who is relentless and doesn't give up on plays.

"It's a sense of calmness because I know Chucha works really hard," Jackson said. "I know he'll give it his all to win the ball back. I've never seen a player like Chucha."

Before the Panthers' opening round game of the Class 5A State Tournament in Searcy, Palacios was given the honor of becoming a team captain for Siloam Springs.

Marroquin, who is a team captain but was lost for the season with a broken foot on senior night against Russellville on May 1, gave Palacios his captain's badge. He'll have it on Friday against the Cyclones.

"They needed someone else out there and the person he is and how everyone likes him, everyone has that respect for him," Marroquin said. "That's what inspired me to give him the captain's badge."

On the season Palacios has three goals and two assists.

"He's so smooth," Marroquin said of Palacios. "Nothing looks forced. That's what makes it look so beautiful."

The Panthers and Cyclones will meet in the state finals for the fourth time in five years on Friday in another chapter of what has become one of the state's best soccer rivalries.

Russellville defeated the Panthers for the 6A state championship in 2015 and 2018, while the Panthers won the 2016 title game. Overall, in 15 meetings, Siloam Springs holds a 9-6 edge on Russellville, including a 2-1 win at Russellville this season on April 2 and a 1-1 (3-1 PKs) victory on May 1.

"Russellville's a great team," Shoemaker said. "We knew from the beginning of the year. They were our target. Besides us they are the bar for our classification in soccer."

"They're well coached. Coach Fuller has four championships. He knows the game. Both of us had eight seniors play in that final and here we are again. It speaks a lot to their program."

Despite losing twice to Siloam Springs in 5A-West Conference play, Russellville (18-4-1) won the league championship with its only two losses in league play coming to the Panthers (18-5).

"My group of guys have already exceeded my expectations for this year," said Russellville coach Jared Fuller. "I'm so proud of how they improved and take advantage of their opportunities. I lost seven starters and 10 seniors from last year's team.

"It was sad hearing that (Brent) Crenshaw took a new job (in Fayetteville), but with Shoemaker moving back to Siloam the team didn't miss a beat. I enjoy the respect we have for each other as coaches and the respect I've seen most of the players show each other. My thoughts are that the two best teams in 5A are playing for the state title. I'm excited that it worked out this way and we get a chance to prove that we can beat them this year."

Fuller said he felt for Marroquin for not being able to play in the title game due to injury.

"I feel sorry that number 3, Christian, got injured, but I know he will go on to be a great college soccer player and I wish him the best of luck," Fuller said. "Siloam has many talented soccer players this year, they are organized and Wyatt (Church) has been a wall in the goal every time we have played. It will be a great game and I'm excited we are playing against the best."