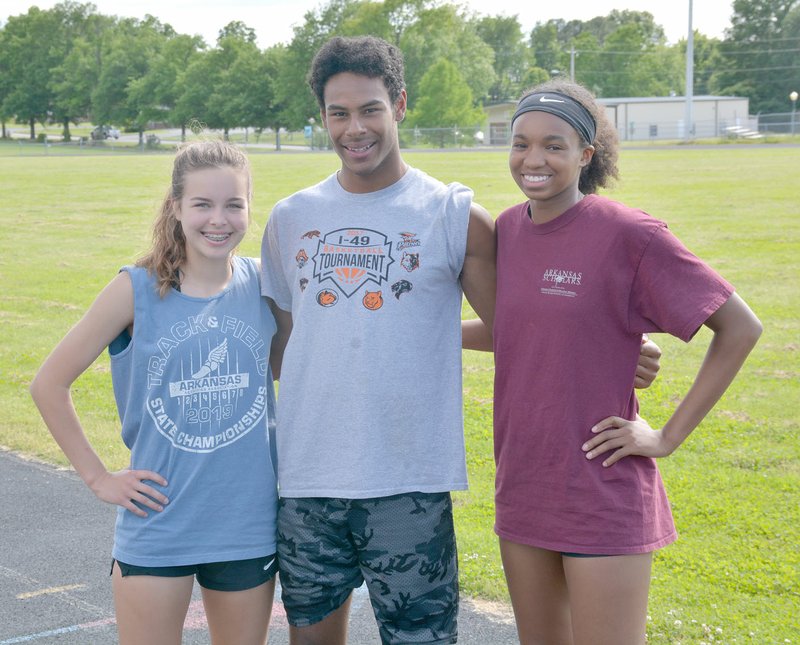 Graham Thomas/Herald-Leader Siloam Springs sophomore Quincy Efurd, left, sophomore Keegan Soucie and junior Jael Harried are scheduled to participate Wednesday and Thursday in the Arkansas State Decathlon/Heptathlon in Fayetteville. Efurd and Harried will compete in the Heptathlon while Soucie will be in the Decathlon.

A trio of Siloam Springs track and field athletes will be participating in the Arkansas State Decathlon/Heptathlon on Wednesday and Thursday at Ramay Junior High in Fayetteville.

Sophomore Keegan Soucie will be the only Panther participating in the decathlon, while junior Jael Harried and sophomore Quincy Efurd will represent the Lady Panthers in the heptathlon.

Competition will begin at noon Wednesday and will resume at 9 a.m. Thursday.

"It takes a special kid to want to continue to work, especially doing 10 events and seven events," said Siloam Springs co-head track coach Chuck Jones. "These kids are excited about it, so we're excited to take them."

The 55th annual decathlon will begin Day 1 with the 100-meter dash along with the long jump, shot put, high jump and 400-meter dash. Day 2 will conclude with the 110-meter high hurdles, discus, pole vault, triple jump and 1,500-meter run.

"For Keegan, he can do a lot of things well," Jones said. "So I feel like the decathlon is going to be a really good event for him, because he's a strong kid and he does have good speed and he can jump well. He's really been working on his distance this year. Even with some of the individual events he likes, like the high jump, I really feel like he's got a chance to do better at all 10 events."

"The girls, when we put in their scores, they've got a chance to finish in the top 30, if they perform well," Jones said. "I think Quincy, she's just a well-rounded athlete, so for her the 800 and the hurdles are just going to be some of her naturally best events. She's been practicing the high jump and doing a great job and been doing a good job with the discus.

"Jael, she's been a little under the weather, but she does about four to five of these events anyway. So for her, it was mainly the shot and the discus and that 800 that gets everybody at the end. I think these girls have a chance to score well."