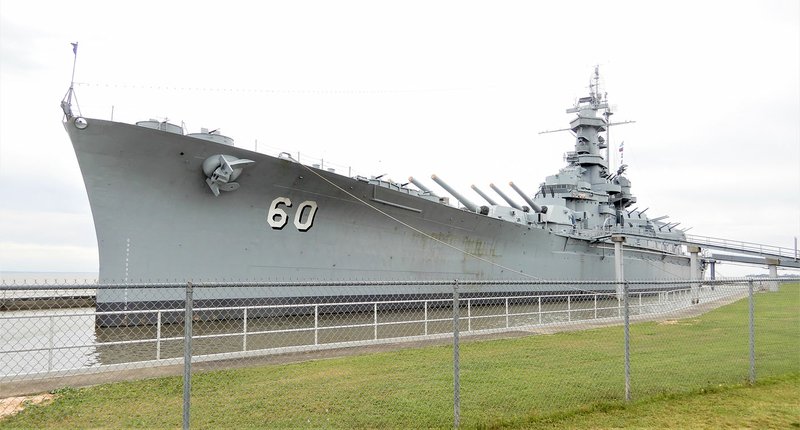 Gene Linzey/Reflections on Life Pictured is the USS Alabama battleship located in Mobile, Ala.

I've visited many forts in the U.S.A. Among them are an underground bunker near Boston, Fort Sumter in Charleston Harbor in South Carolina, and Fort Worden near Port Townsend on the Washington Peninsula. Forts were strategically placed on our borders for training and for protection in wartime. Some forts were ready for battle during both World Wars in case the Germans or Japanese attacked the mainland.

But land-based forts are for defense and are useless in battles we fought across the seas. We needed portable offensive forts: forts that could be hauled across the world so we could take the fight to the land of those attacking us. Our first serious effort to build a floating fortress was in 1892 when we built the USS Texas. That was a good start and we learned a lot, but we needed something more substantial.

The U.S. experimented with several ideas from 1894 through 1932, and we finally succeeded in designing and building fully decked-out citadels. However, because of a tactical error, eight of these sea-going fortresses were sitting-ducks in Pearl Harbor on December 7, 1941 and all eight battleships were bombed. The USS Nevada, USS Tennessee, and the USS Maryland were repaired and returned to service that same year. Three others returned to service in 1943-1945, but we needed new and improved fighters.

Interestingly, no U.S. battleship was sunk in any war after December 7, 1941.

The USS Alabama was one of the new sea-going fortresses coming on line, and was commissioned in February of 1942 prior to the battles of the Coral Sea and Midway. The Alabama, weighing about 45,000 tons and had a crew of 1,793 men, was a fast battleship that could cruise at 27.5 knots (32 mph), and could sail for 14,773 nautical miles (17,000 miles) before refueling.

The ship bristled with firepower. It had 20 five-inch (inside diameter) guns firing 54-pound projectiles, and had 46 anti-aircraft guns. Its massive fire-power came from nine 16-inch (diameter) guns, which fired projectiles (large, bullet-shaped bombs) weighing an average of 2,400 pounds. These fortresses didn't need to be near the shore, for they could hit the enemy 24 miles away with these weapons. Amazing!

The ship had a belt (steel-plating) at and below the waterline that was over a foot thick to deflect the concussion of near-miss bombs, and deflect or dull the blast of torpedoes.

The USS Alabama has seen battle action around the world: throughout the Atlantic, the Mediterranean, the Philippines, and all through the Pacific Ocean. But its legend continued even after the war. In 1947 it was taken to the Puget Sound Naval Shipyard in Bremerton, Wash., to await further orders. The USS New Jersey was the only battle wagon activated for the Viet Nam war, so the Alabama was decommissioned. In 1964 it was towed to Mobile, Ala., and became a floating museum.

But there's more to the Mighty "A" to know.

The Alabama is also a movie-star -- although, uncredited. It had a major role in the 1975 movie Movin' On. It was used in the 1988 miniseries War and Remembrance representing the USS Iowa. Nicolas Cage starred in USS Indianapolis: Men of Courage with the Alabama posing as the USS Indianapolis. And it was used in most of the battleship scenes in the 1992 film Under Siege.

I've been on aircraft carriers, cruisers, destroyers, frigates, PT-boats, tug-boats and many others. But I had never been on a Battle-Wagon. Seeing the ship often as I drove by on Interstate 10, I always wanted to visit it, and decided that I would ... someday.

As I walked up the gangplank, I said the traditional, "I request permission to come aboard." The tour guide was a retired Master Chief Petty Officer. Smiling, he responded, "Permission granted. Welcome aboard, Chaplain." We both laughed and saluted.

I walked every available passageway from stem-to-stern. I slowly walked the main deck and recalled what our U.S. Navy personnel experienced in battle. I honor and admire them for fighting to maintain our freedoms.

With the advent of jet planes, rockets, and missiles, Battleships are now obsolete; but I am in awe of this magnificent ship. I am grateful to the Mobile city fathers for preserving this historic memorial -- the Mighty "A" -- for future generations to experience.

-- Gene Linzey is a speaker, author and mentor. Send comments and questions to [email protected] Visit his website at www.genelinzey.com. The opinions expressed are those of the author.

Print Headline: The Mighty "A"