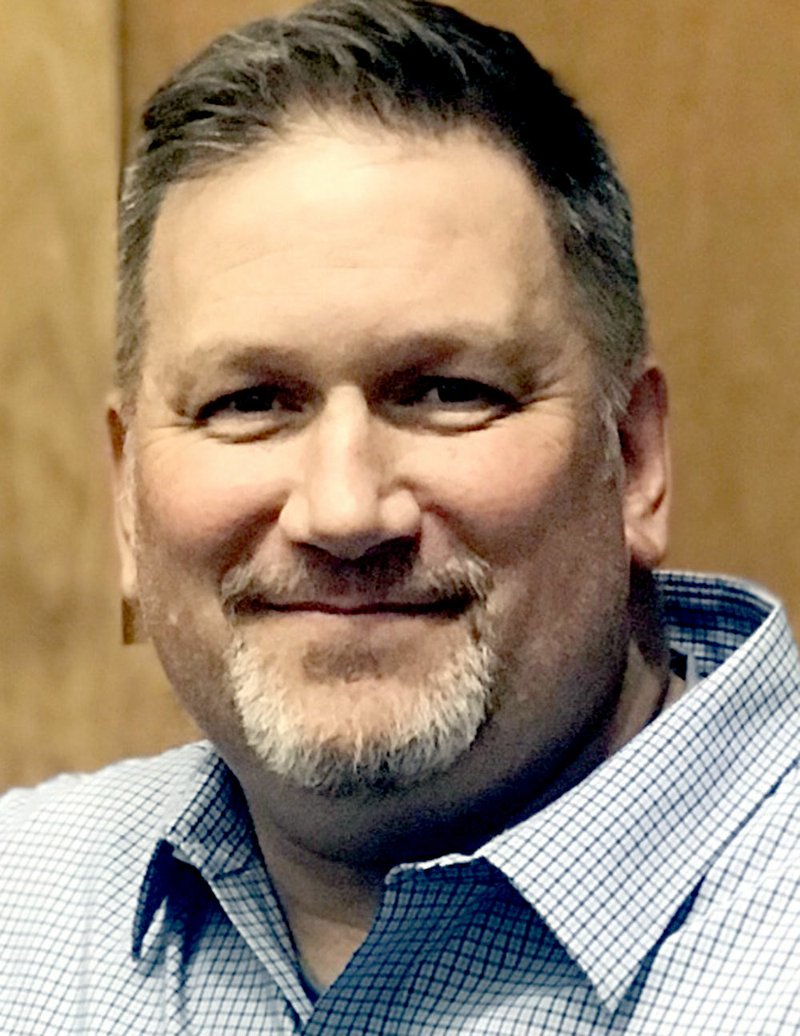 • Background: Grew up in the Tulsa, Okla., area then became a permanent resident of Siloam Springs after graduating from John Brown University in 1992.

• Education: Graduated from John Brown University with bachelor's degree in art and design, and a minor in physical education.

• Professional experience: After college, he started working as the athletic director for the city parks and recreation department, running the sports program and youth programs. He started the youth soccer program and high school club soccer team in Siloam Springs, where he began working with Superintendent Ken Ramey, who was high school principal at the time. He then transitioned into his creative career, working for Saatchi & Saatchi X from 2000 to 2007. In 2007, he worked for DaySpring for a short time, then worked for Disney's Creative Group in Bentonville from 2008 to 2014. In 2014, he returned to Saatchi & Saatchi X, where he currently serves as associate creative director.

• Family: Married to Monica Jackson since 1992, with three children: Eli age 18, Jonah age 20 and Morgan, age 23, and husband Shane Carlson. Monica Jackson is a first grade teacher at Allen Elementary School and all three of the couple's children attended Siloam Springs Schools, with the youngest, Eli graduating in 2019. Morgan is in her first year teaching kindergarten at Northside Elementary School.

• Civic organations: Involved in church, coaching with the Arkansas Comets Soccer Club and helping out with coaching education at the local soccer club.

• Involvement with the school district: In addition to serving on the school board, he has volunteered to teach art in his wife and daughter's classes. He has also volunteered for professional days. He has taught art in locations such as Kansas City, Mo., and Haiti, and was recently chosen to teach art for two weeks in Homer, Alaska.

Jackson said his motivation for working with students stems from his time in college working with youth in soccer camp. He said part of the reason he agreed to serve on the school board last year was that he always wanted to work in education but never took the steps.

"I realized I enjoyed working with students, being a mentor and just being involved with their lives and trying to help them have a positive experience ... I wished I had kind of gone into education. I viewed this opportunity with the school district. It was just motivation to get involved and be a part of education that I was never able to do before.

"Especially, just having a heart for the different groups we have involved, especially with soccer. I'm able to reach kids I would never be able to touch base with if it wasn't for the game of soccer, learning new cultures just kind of fills my heart with that ability to be a part of their lives and be a possible influence."

What are your reasons for wanting to represent Zone 5 on the school board?

When I was asked last year, I really sat down and prayed about it, thought about it, and just felt like I had a lot to offer by way of interest in the students and how they are taught. You know being around it with Monica teaching for so many years, I just have a love for the school district and so I just felt like my experience of three kids coming through the program, I just thought I could bring an insight like that.

So again, it was just a love for the school district. Like I said, I never took that step to be in education formally so I kind of felt like this was my opportunity to do that. I have no agenda on moving on or doing different things. I just want to put some time on the board and help out where I can and bring maybe a different thought to how decisions are made or a different point of view on different items.

What do you feel qualifies you to serve on the school board and what strenghs do have to offer?

I think I have a calm attitude, I have a helping attitude, I want to help and so I know the school district needs help, and I want to be there for that. I want to recognize people that can come in and help the school district. That's just one thing, it's been great to see and get to know the different people in all the different areas, which I didn't really have an idea about, and to see the helpers there.

And then, as I said, I have a calming attitude, I don't get to riled up, physically or emotionally, so I feel like I can bring a sense of calmness to decision making, hearing all sides of the story.

Even the insight from Monica being a teacher and Morgan being a teacher, teachers are hugely important. I think it's kids first, teachers next, because they are loving on those kids every day and it just really is impactful to get to see the students that Monica now has come up to her.

You know, we can't go to Walmart, she's a celebrity in town and so kids that are 25, 26, they're coming up and she's taught some of her student's kids now, so just seeing that and the impact she's made on the lives. I want to be there for the teachers to help them as well and let them know there's an ear to listen and do what I can when items come across our agenda.

What do you feel like are the school district's strengths and what to you feel needs improvement?

I think leadership definitely is a strength, and we're losing a huge leader in that with (current superintendent) Ken (Ramey) leaving. I think (current assistant superintendent) Jody (Wiggins) is ready to step in and he's had so many years under Ken, I think it will be great to see how he will be different but also to be able to carry those characteristics that have been on point, that Ken had, that Jody will be able to take.

And then our evolvement as we grow. I think we really need to get a handle on where that growth is going to come from, how we're going to have a plan going into that, or as that comes up, I think that's important. So I think the strength is in leadership, the strength is in teachers. We've got fabulous, fabulous teachers in our district, and then I think just areas to improve or grow, will be following that growth pattern, knowing what's going to happen. Let's have a plan in place early, not that it's a weakness but I don't think we've had to think about that for a while.

What do think is the biggest issue facing K12 education in Siloam Springs?

I think it's families outside of the school district. I think the kids that are coming in at kindergarten level are different than the kids 10 years ago. I think they're bringing situations into the school that we need to be ready to handle and deal with, but they're still just kids and I think know their background, their family situation, where we can't necessarily handle every kid exactly the same way so we need to know their situations, learn from them.

They're telling us without telling us. If they're hugging their teachers, it's for a reason they might not be saying and so these teachers need to love on the kids all the way from kindergarten to 12th grade. Twelfth grade teachers just as much as kindergarten teachers and so I think it's just a matter of getting to know each individual student and it's hard to say we can't get to know every one, but when you break it all the way down to teachers, there is 20 however many kids in a class, if those teachers can get to know those kids.

And then you know I encourage teachers to stay in contact with them, when they see them and they're out and about, and they're two or three or four grades later, remember their name and say something to them because you just never know, that moment that can change a kid's life and the direction that his or her life has for them. It could go one of two ways and I think teachers are in a pivotal role in a pivotal time of our society. I think we just need to love on those kids and just be good mentors to them, even outside of all the testing and grades, that emotional connection can go a long ways for sure.

What do you hope to accomplish while you're on the school board?

Well, there is no big agenda, I just want to be there to support and help, whatever that means for us to continue to grow and just be able to stay positive and on top of things. We're going to be put in challenging situations whatever they are, you know I think it's just a matter of lending my support, bringing in that calm, cool collected kind of mentality, assessing the situation. After a situation is taken care of, going back and looking at it, making sure we did the right thing or at least what we thought was the right thing.

I want to get to know the school district even more. I am horrible with names, I'm great with faces ... but I would love if I'm back in, get to know our teachers and principals even more personally ... so that they know I am here to support, not to intimidate or anything like that. Totally, we're all here for the same reason -- the students.

If it's meant to be for me, it's meant to be. Again, I'm not looking this as a stepping stone for anything, it's just I want to be a part of the school district, be a part of our community and this is one area I feel like I can be. Working out of town is tough so when I get back, this keeps me tight to the community, what's going on.

I just have a love for the school district, the kids of our community and then I want to see our teachers supported because I know those are the first line these students have as they grow and would love for these kids to come up to their teachers over and over and over as they grow older and be able to hug them in Walmart or wherever and say 'You made a difference in my life.' Those are awesome stories.

And then just to develop young leaders in our community and then outside our community. Whatever God has in store, whatever the plan is, I'll be willing to do that and if for some reason I'm not elected, I'll find somewhere else to support and be a part of.