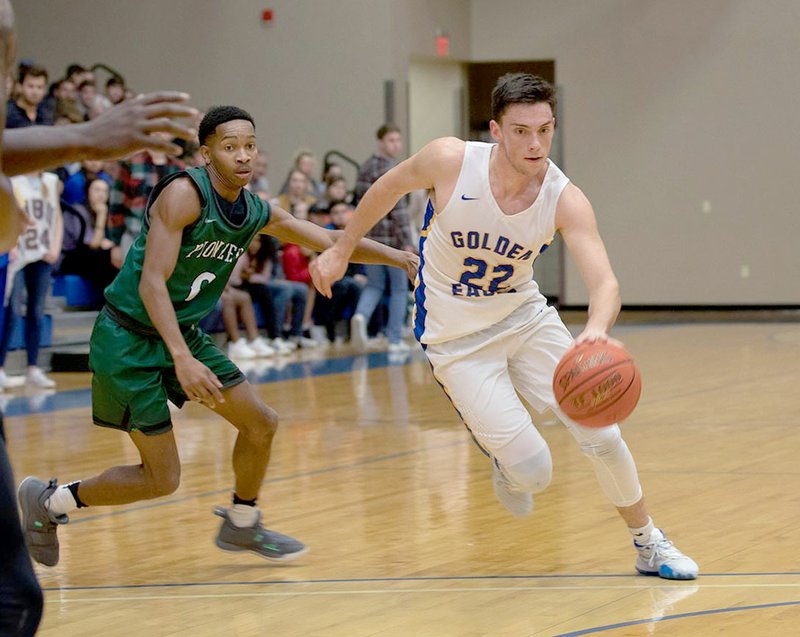 Photo courtesy of JBU Sports Information John Brown sophomore Luke Harper drives to the basket against Crowley's Ridge College on Saturday in the opening game of the season for the Golden Eagles.

Quintin Bailey took the pass and dribbled to his right into the free-throw lane, then he floated a short jumper toward the basket.

The "best technical foul in college basketball" was in full swing moments later, but the celebration just started for John Brown's men as the Golden Eagles opened their season with a convincing 90-56 victory over Crowley's Ridge College during the annual Toilet Paper Game in Bill George Arena.

All five starters finished in double figures for John Brown (1-0), which enjoyed a decisive advantage in 3-point shooting. The Golden Eagles hit 16 of 32 shots from beyond the arc -- six of them by sophomore Luke Harper -- while the visiting Pioneers missed their first 11 attempts before Ke Robertson hit one with under a minute remaining.

"I was a little taken back when I first saw that number at the end," John Brown coach Jason Beschta said. "I thought we shot the ball really well, and I knew Luke got hot in the first half so that stood out. I hadn't realized it was at that level. Honestly, I've been telling people I didn't know how well we would shoot the ball this year.

"We can't say from one game we're going to be phenomenal, but I thought we got good looks and knocked them down. It was great to see because that's been a staple of ours over the past few years. To see us hit some shots was encouraging."

Bailey's bucket led to about 2,000 rolls of toilet paper to cascade onto the floor and a 10-minute delay followed, as well as a technical foul on John Brown. Kyle Moore sank the free throw to make it 2-1, but it didn't take long for Harper to find his 3-point shot.

The sophomore hit three from beyond the arc and gave the Golden Eagles their first double-digit lead, 16-5, with 15 minutes, 4 seconds left in the first half. He then countered David Ballard's three-point play with his fourth 3-pointer and made it 19-9, and his fifth one sparked a 15-2 run, with Ira Perrier's 3-pointer making it a 36-14 game with 6:33 before halftime.

"In the last eight games last year, I think Luke went 17 of 27 from 3-point range," Beschta said. "We all know he has the ability to really score. In addition to the 3-point shooting, he has a nice floater and some other things.

"What I liked about it is he took some tougher shots after that, and he missed a couple. But we need him to be a scorer, so it was good to see the confidence. We want him to pull those shots, and we want him to hit them."

The Golden Eagles closed out the first half on a 13-2 run for a 51-22 cushion, and their biggest lead came when Adam Asgeirsson's bucket made it 87-51 with 2:27 remaining.

Harper finished with 20 points to lead John Brown, which enjoyed a 30-of-50 (60 percent) shooting performance. Rokas Grabliauska added 14, including 4 of 6 from 3-point range, while a trio of Golden Eagles -- Densier Carnes, Bailey and Perrier added 12 apiece. Carnes just needed a double-double with nine rebounds.

"Our starting five was really solid for us," Beschta said. "I think we have really high expectations for them. I think if you look at the scoring and see five guys in double figures, that speaks volumes. We have a lot of guys that are able to contribute on any given night. Any one of those five could lead us in scoring. There's not just one guy we are counting on.

"It was fun games like this to really get into our bench and our backups and see what they can do. They need that experience, which did result in a lot of turnovers. It will come with time as we work on some things."

John Brown returns to action this weekend with the Benedictine Classic at Atchison, Kan. The Golden Eagles play at 3 p.m. Friday against Missouri Valley and again at 5 p.m. Saturday against host Benedictine, which is ranked ninth in the NAIA poll.