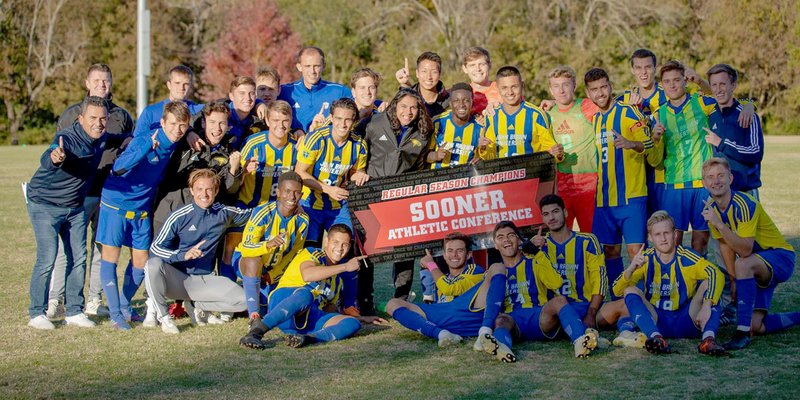 In its 25th season as a member of the Sooner Athletic Conference, the John Brown University men's soccer program captured its first-ever regular season championship on Saturday afternoon with a 2-0 victory over Southwestern Christian (Okla.) at Alumni Field.

Senior Kelvin Omondi's highlight reel goal sent the Golden Eagles (14-2-0, 8-0 Sooner Athletic) off to a dream start in the sixth minute, while freshman Oscar Carballo's insurance strike in the 69th was more than what was needed as the back line didn't concede a shot on goal through full time.

Twenty-five years in the making, John Brown will now hold the upcoming SAC tournament's top seed and host throughout the tournament, with the quarterfinals set to begin on Friday, Nov. 8. Times and opponents were not available at presstime.

JBU, which won its 11th straight match, has outscored its SAC opposition this season by a margin of 33-2. As of presstime, the Golden Eagles had one remaining match -- on Tuesday against Mid-America Christian (Okla.). Results were not available.

"(This championship) wasn't won overnight; it was won over a couple years," head coach Brenton Benware said after the match. "We have a young group -- 18 freshmen and sophomores -- and a few select upperclassmen that committed to making something special happen this year.

"We'll celebrate this. It's history for JBU men's soccer. Then, we'll rest and prepare for Tuesday."

The sharp turn-around took time, but was sudden for a program that finished a combined 9-9-1 (.500) over the past two seasons in league play. Now, the Golden Eagles have a chance

finish by running the table before hoping to do it again in the tournament. The Sooner Athletic Conference has only one automatic bid to the NAIA National Championships -- and it's awarded to the tournament champion. So while the watershed moment is a special one, no postseason run is guaranteed, at least for now.

Junior Samuel Estrada stole possession away from SCU in the defensive midfield and quickly began the counter-attack in the sixth minute, sending a brilliant pass up the left wing to Omondi. It was all Omondi after that, as he cut across the top of the 18 and sent a bending strike around a Southwestern Christian defender and goalkeeper Gerard Espinalt to pocket his sixth goal of the season.

While out-shooting the visitors 8-1 in the first half, the Golden Eagles nearly doubled its lead in the 31st when Carballo's attempt in the goal mouth was stopped by Espinalt. Carballo secured the rebound and sent a shot past the out-of-position Espinalt, but the shot was cleared off the goal line by the SCU defense, keeping the match a one-goal game.

John Brown finally doubled its advantage in the 69th minute on a play that was started by sophomore Goncalo Verissimo's pass into the middle to junior Jessie Zavala. Zavala flicked a cheeky one-touch pass over the back line and was then headed on further by Omondi. The sequence sprung Carballo alone in tight with Espinalt. Carballo finally earned his 18th of the season by ripping an attempt to the near left side goal from just a few yards away.

The match could have easily been opened up to 3-0 or 4-0, but Zavala and Verrissimo each had attempts down the stretch draw iron, which kept the match at 2-0 through full time and the Golden Eagles completed the effort in keeping Southwestern Christian without a shot on goal for the full 90 minutes.

The back line and senior Britt Wisener picked up their 10th clean sheet of the season, with Wisener notching his seventh personal. Espinalt finished with four saves on seven attempts in the loss.

JBU was scheduled to close out the regular season on Tuesday against Mid-America Christian, a match that was previously postponed due to weather on Oct. 30. Results were not available at presstime.