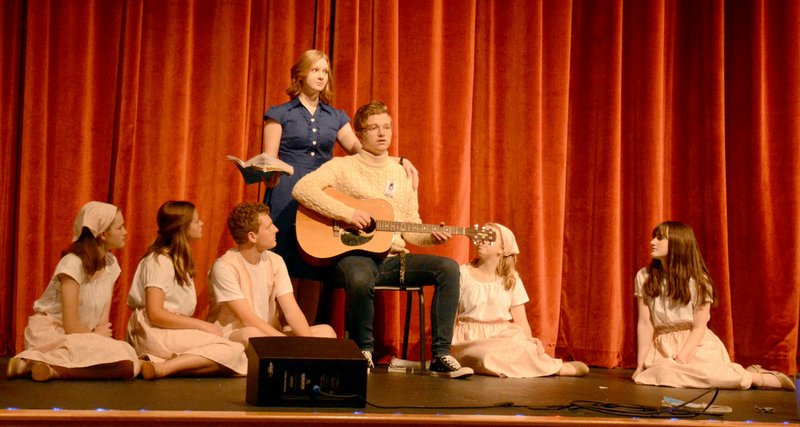 The Siloam Springs High School theater and choral departments are partnering to present The Sound of Music in November.

The department puts on a play in the spring and fall, but only presents a musical every other year, according to Dana McCutcheon, theater arts and stagecraft teacher.

"We do a musical every other year because they are extremely expensive to put on," she said.

Choral directors Julianna Tufts and Ethan Well chose The Sound of Music for this year's production.

"We wanted to see what we have not done and what is something the community can really get behind and would really enjoy to see on stage live" Wells said.

Practices for the production began in September. Two actresses, senior Rachel Mann and junior Isabelle Pennick, are playing the part of Maria, the character who studies to become a nun before becoming the governess to the von Trapp children and later the wife of Georg von Trapp. They will alternate their performances on different dates.

When the show was being cast, the directors could not decide which actress to pick to play Maria because each one brought such fresh interpretations to the role, Wells said.

Mann said that she has always wanted to play Maria and getting that role was an honor. This will be her last show with the theater department because it is her senior year and she will have scheduling conflicts in the spring, she said.

Mann and Pennick have done a good job of showing their ability to sort through how to share the role of Maria and what dates they will perform during the show, Wells said.

"Sometimes it gets like a little confusing (to share the role), but we just work it out in the end," Mann said. "If I sit out one [rehersal] then we just trade notes."

Pennick has also enjoyed playing the role of Maria, she said. This will be her last musical since the theater department only presents one every other year.

Wells also recognized Britney O'Brien, who plays the mother superior of the abbey, for her ability to manage her role while working on the technical crew to ensure that costumes are in place.

The rest of the cast consists of new performers and seasoned veterans of the theater department.

"The entire show is open to all students, ninth through 12th grade," Wells said. "They just have to come in and just sing us a song from the show and they have to prepare a monologue and we assign the roles accordingly."

Tickets are available at the door and are priced at $10 for adults, $7 for students and are free for ages 5 and under.

"We have put a lot of love and heart into this show and we are very proud to present it to the community and we hope that everyone comes out and supports these kids," Wells said.