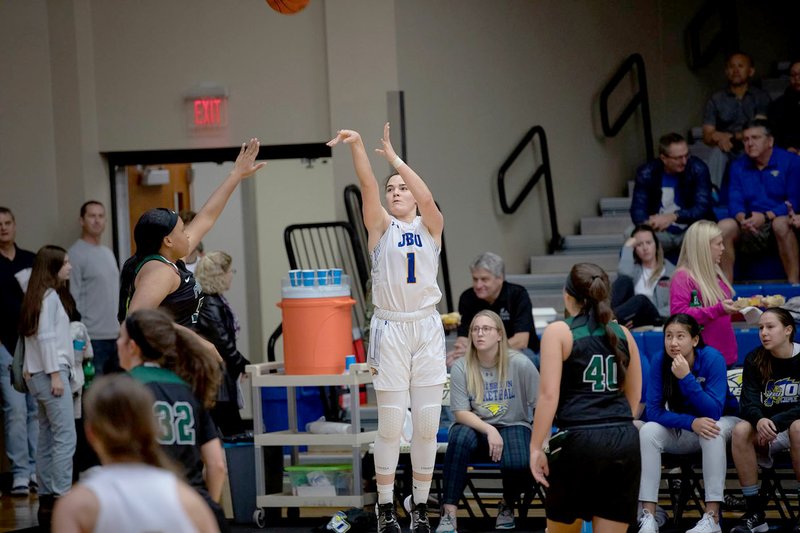 Photo courtesy of JBU Sports Information John Brown's Marta Matamala shoots a 3-pointer from the corner during the second half of the Golden Eagles' season-opening win Saturday against Crowley's Ridge College at Bill George Arena.

John Brown's women only had a three-point lead midway through the first quarter of their basketball season opener Saturday.

The next 5 minutes made a world of difference for the Golden Eagles. John Brown outscored Crowley's Ridge College 19-5 during that time, and the Golden Eagles went on to post an 82-42 rout over the Lady Pioneers in Bill George Arena.

"It's the first game, and it's a different crew than we've had," John Brown coach Jeff Soderquist said. "We lost a lot from last year, especially scoring-wise, so we're trying to figure out different pieces. But it was the first game, right?

"It was a good first game. We looked good in some areas, and we have to clean up some areas. It's a good thing to learn some things and try to get better, and still get the W."

John Brown (1-0) led 7-6 after 4 minutes of play and 11-8 with 4 minutes remaining in the first quarter. Five different players then helped the Golden Eagles score the next 14 points before Crowley's Ridge ended the run with Octavia Lowery's 3-pointer, but senior Jordan Martin of Bentonville countered with her second 3-pointer to give John Brown a 28-11 cushion.

The Lady Pioneers (1-2) closed the gap to 37-23 on Icysis Sanders' bucket with 2:03 before halftime, but a bucket by Martin and a 3-pointer by Maddie Altman gave the Golden Eagles a 42-23 halftime cushion. John Brown blew the game open in the third quarter.

Sophomore Marta Matamala -- one of four guards in the Golden Eagles' lineup -- scored 11 unanswered points, then Jordan's fourth 3-pointer and a bucket by Tarrah Stephens completed a 16-0 run that gave the Golden Eagles a 60-24 cushion. The Golden Eagles also had an 11-0 run in the fourth quarter and took their biggest lead, 80-35, on Haley James' bucket with 3:53 remaining.

Matamala led four John Brown players in double figures with 20 points, followed by Martin with 14, Sara Williams with 12 and Stephens with 11. Taylor Fergen had only three points but recorded team-highs with 10 assists and 5 steals.

"I've always said -- being a college coach as long as I have -- if we have three players at least in double figures every night, we'll be successful," Soderquist said.

John Brown travels to Waxahachie, Texas, to participate in the Southwestern Assemblies of God Classic. The Golden Eagles will play at 8 p.m. Friday against Paul Quinn, then return to action at 3 p.m. against Our Lady of the Lake, which is ranked sixth in the NAIA poll.