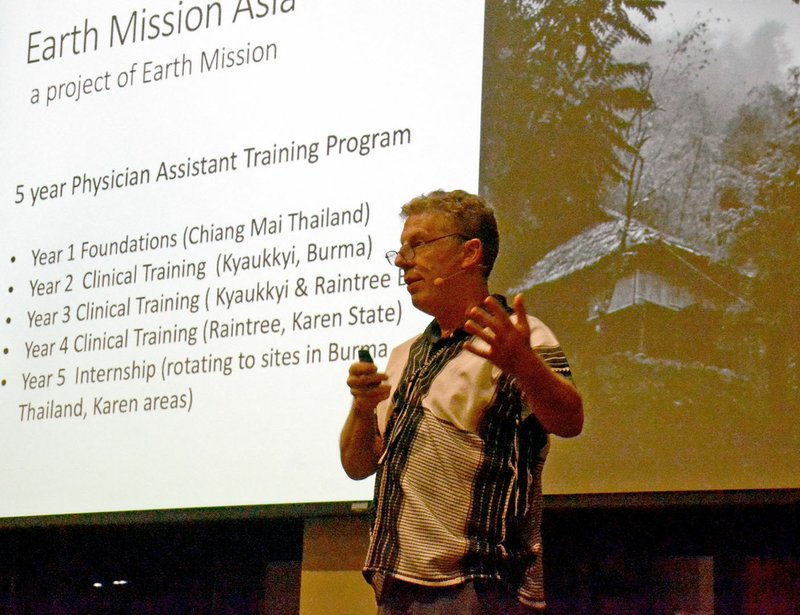 Janelle Jessen/Herald-Leader Dr. Mitch Ryan shared information about Earth Mission Asia during a fundraiser for the organization at John Brown University on Oct. 22.

Earth Mission Asia, a Siloam Springs-based nonprofit, is growing and working towards graduating its first class of physicians' assistant students who will provide medical care in remote areas of Myanmar, also known as Burma.

Dr. Mitch Ryan, program director, gave an update on the nonprofit's work during the second annual fundraising banquet on Oct. 22 at John Brown University's Simmons Great Hall. Dr. Ryan and his wife Carol Ryan, administrative director, were visiting the U.S. for the event.

The fundraiser brought in approximately $23,000, according to Jim Pearson, board member and father of Carol Ryan.

Earth Mission Asia enrolls students from the Karen (pronounced Kuh-ren) people group in a five-year physicians' assistant training program with the goal of sending them back to their home communities in remote jungle areas to provide much needed medical care, Ryan said.

Currently, the program has more than 30 students with six students set to enter their fifth year of training, according to the program's yearbook. Earth Mission Asia also offers an engineering technology program to teach students how to build and maintain the infrastructure needed for medical clinics.

The larger Earth Mission organization, established in 1982 by L.D. and Sue Ryan, has additional projects in other parts of the world but the fundraiser focused on the work being done in medical education in Myanmar. Dan Ryan, owner of Siloam Springs-based Ryan Engineering, is the CEO of Earth Mission Asia.

The Karen people are concentrated along the Thai-Myanmar border and have been impacted by decades of armed conflict in the region. Because of the challenges, there is a very high maternal mortality rate and mortality rate for children under age 5 in comparison with the rest of the region and world.

Common causes of death for children in the area, such as pneumonia and diarrhea, are usually easily treated, he said. Medical care providers also have to learn to treat diseases such as typhus, typhoid, leptospirosis, dengue and malaria, which are not often seen in other parts of the world.

Practicing medicine in the jungle offers unique challenges, Dr. Ryan said. Students have to be able to think critically to solve problems while faced with challenges such as limited equipment and resources. They also frequently work alone, which means they have to combine the diagnostic skills of a physician with nursing and lab tech skills.

In 2018, Earth Mission Asia was able to find a new location in Chang Mai, Thailand, that accommodates the increased staffing, training and housing needs, according to the organization's annual report. In addition, the nonprofit was also able to nearly double the number of staff members working in Thailand and Myanmar. The organization also bought 17 acres of land to build a future Salay Hospital and student campus, the report states.

Earth Mission Asia also formed an agreement with the Karen Department of Health and Welfare to build the Rain Tree Clinic in a remote area, the report states.