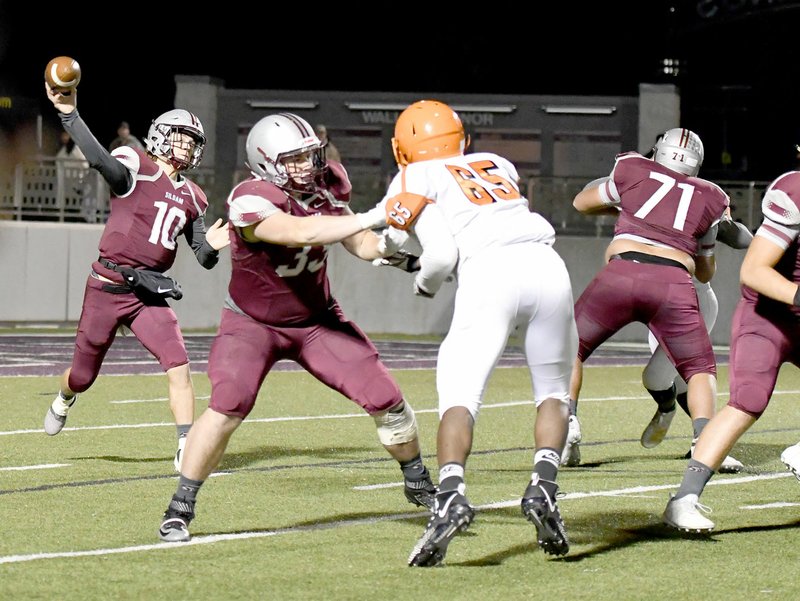 Taylor Pool has been asked to do many things in his football career at Siloam Springs.

As a sophomore, Pool was thrust into the role of starting quarterback for the final two games of the 2017 season after starter Landon "L.T." Ellis went down with a torn ACL.

For his junior season, Pool moved to the defensive side of the ball as starting free safety all the while remaining the backup quarterback to Ellis, along with special teams duties as punt returner.

The 2019 season saw Pool move back to the quarterback position but this time as the starter. He's also been the primary punter for the Panthers.

"This year we needed a quarterback, so I had to step in, make sure I knew the offense, make sure I understand the leadership role that comes with it and I'm able to fill those shoes, and I was able to step up and do that."

Indeed a lot has been asked out of the 5-foot-11, 179-pound senior, and the Panthers will lean on Pool one more time Friday night with a playoff spot on the line at Siloam Springs (3-6, 2-4 6A-West) travels to Russellville (2-7, 1-5) for the final regular season game. The winner of the game between the Panthers and Cyclones goes to the Class 6A playoffs, much like the 2014 and 2015 regular season finales between the two schools. In 2014, the Panthers mercy ruled the Cyclones at Cyclone Stadium 42-21, but Russellville and former Siloam Springs head coach Billy Dawson got the upper hand in 2015 with a 45-35 win at Panther Stadium.

The loser of Friday's game will see its season end, and the Panthers are well aware of that, Pool said.

"I mean our back's against the wall," Pool said. "For us as seniors, it's our last game if we don't win. But at the end of the day we're not going to put too much on ourselves. We're going to go at it like any other week. Sure we're going to have a little more fire under us, but we have to realize we're in a situation where we were two points down at Greenwood at halftime, and we were beating Lake Hamilton 17-7 at half. We just have to play four full quarters and make sure that our highs don't get too high and our lows don't get too low."

In Pool, Panthers coach Brandon Craig believes the senior wants to get the job done and lead his team to the playoffs.

"I've always looked at him as a competitor," Craig said. "He's always shown us that he wants to win, and he's going to do everything he can to help us win. He's fiery. He gets on to guys and his expectations are high, and they're high on himself as well. He's pushed himself to improve as a leader. He's been a really solid guy for us this year."

Pool has been a dual threat for the Panthers on offense with his arm and his legs.

Craig said there has been a noticeable change in Pool's maturity and leadership his senior season and it's paying off on the field.

"I think a lot of it has to do with his demeanor, and how he talks to people and how he relates to people," Craig said of his quarterback. "He's a lot more encouraging now. He understands the role of a leader now, more than he did when I got here (in 2017). I think he's understood that there's a way to lead kids and it's got to be positive. He's really turned a corner when it comes to that.

"I just think that he's obviously grown a lot mentally when it comes to the playbook and what we're doing. He's got a great arm. He makes good decisions. There's always times in every season when the quarterbacks struggle. We've been down that road. He's come through it and keeps fighting and competing, and that's all you can ask as a head coach."

Craig is the offensive coordinator and quarterback coach and spends a lot of time with his quarterbacks preparing during the week.

"We do watch film together during the week, and obviously game plan install and talk about all that," he said. "Yeah there's a unique relationship between the head coach and the quarterback, because both people no matter what are going to take a lot of the blame. We both accept that and move on."

Pool said he understands his role as a leader by nature of his position.

"I think the quarterback position is very important to the offense. Everyone always turns to you," he said. "When you get in the huddle everyone's listening to you and you have control over that. You have control over the offense and over the team. Overall they're going to look to you. Like coach said, you're going to take the blame if you lose. A lot of times you don't even get the credit if you win, it goes to the other guys. At the end of the day you have to be selfless and know that this isn't all about you. It's about the team."

Pool is a two-sport star for Siloam Springs, having started at catcher for the Panthers' baseball team since he was a freshman. Though he loves football, Pool said baseball may give him his best chance to play in college.

"I've always been more attracted to football, but I've been better at baseball," he said. "Baseball, I'm naturally gifted and have been naturally at an early age. I missed school last year the first 3 days because I was in North Carolina playing on a USA team over there. I love both sports a ton, but baseball is my future."

With a win against Russellville, the Panthers could move up to as high as No. 4 seed and a home playoff game for the first round of the playoffs. However, the Panthers would need some help to do so.

According to Henry Apple of the Northwest Arkansas Democrat-Gazette, "Siloam Springs needs a win AND losses by Sheridan and El Dorado to move into the No. 4 seed, which means a home playoff game next week. Even if the Panthers win, they could fall to the No. 5 seed if either Sheridan or El Dorado wins or the No. 6 seed if both teams win. If the Panthers lose, they are eliminated from postseason play."

Craig said there are a lot of similarities between the seasons Russellville and Siloam Springs have had.

The Cyclones trailed El Dorado 14-7 last week before losing 54-14 at Russellville. The Cyclones have played other teams close as well. Their only wins have come against Alma (31-21) and Hall (38-8).

"Overall they're a good program historically," Craig said. "They're struggling a little bit this year. They've faced some of the same issues we've faced. The conference is really good. They've played people really tough and come up on the short end with some things. ... It's just one of those years where everybody in the conference is competitive and they're no different. They're just like us. We have a lot of similarities and we're going to have to play our best game to beat them."