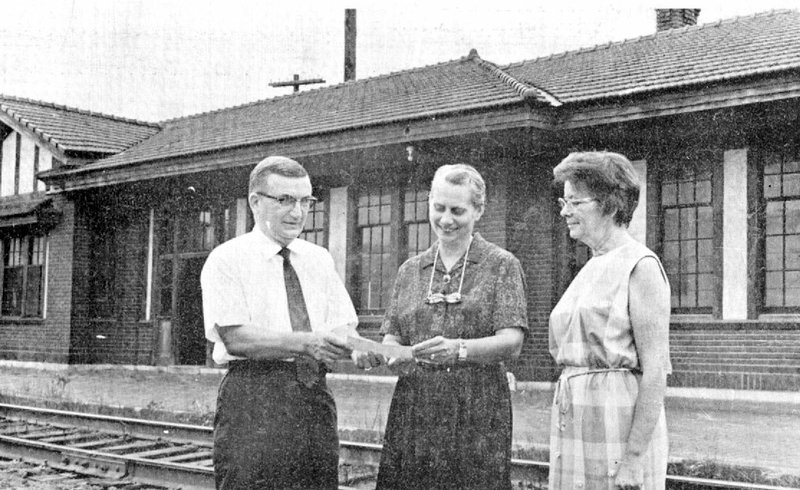 Photo submitted Don Lovelace made a presentation of $200 from the Rotary Club to Museum Society representatives Margaret Schoonover and Sabra Davis to help rebuild the old Kansas City Southern Depot for use as a museum. Exhibits in the building were opened June 20, 1971.

The Siloam Springs Museum is celebrating its 50th anniversary as an organization on Saturday in its freshly renovated building.

The festivities will begin at noon with a welcome address and proclamations from Mayor John Turner and state Rep. Robin Lundstrum (R-District 87). The come and go event will include a Ford Mustang car show by the Northwest Arkansas Pony Club, Thanksgiving crafts and games for children, seven new exhibits and refreshments, according to Mary Nolan, interim museum director.

• Downtown buildings now and then

The museum was incorporated on Nov. 13, 1969, according to Don Warden, director of collections and research.

"It really started without a home," he said. "It was started on the idea there is a lot of the town's history that is being lost and we need to find some way to preserve it."

The museum's first location was the former passenger depot for the Kansas City Southern Railroad on Jefferson Street, Warden said. The museum received a $200 donation from the Rotary Club to renovate space and several volunteers did the construction work necessary to separate the museum from the KCS freight office, which was still in use at the time.

"They really started as a general museum and had (things such as) paper wasp nests as well as Siloam Springs history," Warden said.

Donations quickly filled the small space and the museum began to look for a new building, Warden said. The building was originally built in 1951 to serve as a Church of Christ, but the church had grown and needed a new home, Warden said.

In 1972, the organization purchased its current location at 112 N. Maxwell St.

The city was able to purchase the building using voluntary tax and the museum moved into the space in June of 1972, Warden said.

In December 2017, the city board approved using $371,000 from the sale of the Siloam Springs Memorial Hospital to give the building a makeover and architect Matt Pearson drew a design to maximize the facility's space.

On the first floor, the makeover included opening the ceiling and exterior walls, adding a system of interchangeable walls in the middle of the building, and the creation of a classroom, a special exhibit room and public restrooms. A second story office space was added above the ceiling and the basement was updated to create storage space of the museum's archives.

The museum was closed for almost a year during the renovations, but was reopened with a ribbon cutting ceremony in March, Warden said.

The new design allows the museum to change out exhibits on a regular basis, giving community members fresh reasons to visit the facility, Warden and Nolan said.

The museum didn't make any special plans to complete the renovation during the 50th anniversary year, it all just ended up coming together after years of work, Nolan said.

More information about the museum and updates on museum activities is available at siloamspringsmuseum.com or by following the Siloam Springs Museum on Facebook, Instagram and Twitter.