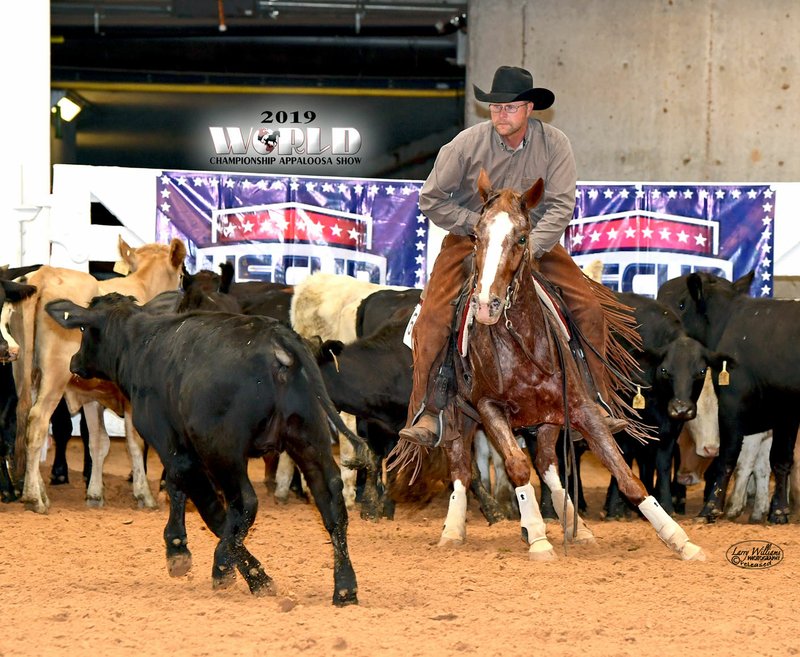 His filly, Sophisticated Girl, brought home a world championship in the 3-year-old cutting futurity from the 2019 World Championship Appaloosa Horse Show, which took place Oct. 25 through Nov. 2 at Will Rogers Equestrian Center in Fort Worth, Texas.

In a cutting competition, a horse and rider are given 2.5 minutes to cut three cows from a herd of 30. Two herders stand by to hold the herd, and two turn-back riders also assist. The rider enters and chooses a cow to seperate from the herd, then gives the horse a loose rein and lets the horse make all the moves to keep the cow from returning to the herd. In order to follow the cow, horses have to stop, sit down, back up and change direction, all in one lightening fast movement.

The achievement is even sweeter for Haid because he bred and raised the 3-year-old as well as her mother, Ima Dads Girl -- the first horse Haid found cutting success on.

"There is something special to me about breeding and raising them," Haid said. "Anybody can go buy a horse but it takes a horseman to raise one."

At 83, Haid is a lifelong horseman who spent decades showing and racing Appaloosa horses. His achievements in racing earned him a spot in the Appaloosa Horse Club Racing Hall of Fame in 2004.

However, it wasn't until 2006 that Haid began exploring the sport of cutting. He bred one of a his racing mares to a cow horse, planning to use the resulting foal, Ima Dad's Girl, in reining or working cow horse events. He had a hard time finding a local trainer specializing in those sports, so instead he had her trained as a cutting horse.

Haid learned the physically demanding sport of cutting in his 70s, and he and Ima Dads Girl spent the next decade racking up national and world championships at Appaloosa horse shows before Ima Dads Girl retired to become a broodmare.

Haid bred the mare to Sophisticated Catt, son of the late, leading cutting horse sire High Brow Cat, who died on Oct. 31, according to the National Cutting Horse Association website, nchacutting.com. At the time of his death, High Brow Cat's offspring had earned more than $79 million in cutting horse competitions, the site states. Sophisticated Catt is also on his way with a lifetime earning of $192,507.

"To me the part of the horse business I enjoy the most is studying the pedigrees and trying to find the right stallion to breed the right mare to and raising that baby," Haid said. "I mean showing is fun, but the challenge for me is to get that baby colt on the ground."

Sophisticated Girl is just starting to live up to her pedigree. The 3-year-old futurity at the world championship was her first show, Haid said. She was trained and ridden during the event by Sonny Martin of Steelvillle, Mo.

"A 3-year-old is like a kindergartner as far as cutting horses go," Haid said. "It's a challenge to get a 3-year-old trained well enough to get through a cutting class."

"We were excited," Martin said. "That was her first show, so we were kind of wondering how solid she was going to be in the show situation and she did good for us."

Martin, who has trained the filly for about 18 months, said the first round of the competition was decent and the second went pretty well.

Martin said he found Haid's involvement with the sport at his age inspirational.

"I was sure happy for him," Martin said. "He's been in the appaloosa world for years in cutting and racing. I was happy he was able to get a win and able to put a trophy on his mantle."

In the future, Haid and Martin plan to continue showing Sophisticated Girl at both appaloosa shows and at more competitive National Cutting Horse Association events. As the filly gains more experience and success, Haid is also hopeful he will get back in the saddle for some of the shows.

"Showing NCHA is a little bit tougher competition, but I think she is going to be fine and show good in that too," Martin said.